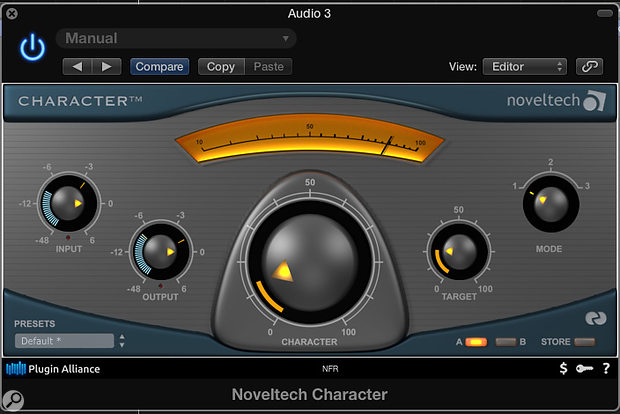 I'm sure everyone will recognise the situation where something doesn't sound 'right' but where conventional EQ doesn't seem up to the task of fixing it. Noveltech's Character and Vocal Enhancer are designed to scratch those hitherto unreachable itches, but for many years they were available only for the now‑defunct TC Powercore platform. The good news is that both are now available as native plug‑ins which use Plugin Alliance's dongle‑free authorisation system. All the common Mac and Windows plug‑in formats are supported, including AAX DSP for Pro Tools HD systems. Existing Powercore users with licences for these two plug‑ins can get a 50 percent discount on the native versions.

Unlike harmonic enhancers, which generate new harmonics from the existing signal, Character works with what already exists, manipulating the spectral balance in a dynamic fashion according to the changing nature of the input. Noveltech calls this 'Intelligent Adaptive Filtering', saying that Character "identifies and enhances the characteristics in audio material that are pleasing to the human ear”. Other than input and output gain, Character has very few controls. Target selects the frequency range being adjusted, over a span that is dependent on the source material. Mode focuses the enhancement on different aspects of the signal, where the three modes are optimised for percussive instruments and vocals, guitars and synths, and bass guitar and pads respectively. A large central knob then sets the amount of processing. A Character Meter shows how much enhancement is taking place. Presets are available, but operation is so simple that it's usually easier just to dial in what sounds right.

I've used Character since the Powercore days and find that it often does just what's needed, though as with any type of enhancer, you have to be careful not to over‑process the sound. It can add clarity and focus without harshness, and is also capable of rounding out the mids and lows in a pleasing way.

Character can be used on vocal tracks as well as instrumental sources, but the dedicated Vocal Enhancer is more effective in this role, as it is fully optimised to the task and has been kitted out with appropriate controls. It uses the same underlying technology as Character, continually reacting to the incoming vocal signal and applying whatever spectral changes it deems necessary based on the material itself and your control settings. Upper and lower filter controls at the bottom of the screen allow the enhancement to be confined to a specific region of the audio spectrum, and a Frequency Focus control determines where the main enhancement takes place, clockwise settings moving further up the spectrum. There's a meter that shows how much enhancement is taking place as well as a large spectrum display that shows very clearly how much is being added and where. Again, there's a large 'how much' knob, but it's joined by a button labelled 'Strong Processing' that allows the effect to be made more assertive — though I've always found the standard mode to be up to the task for conventional vocals.

As with Character, I find that small amounts of enhancement are often all that is needed to add presence, focus and breathiness to a vocal. Treated vocals sound closer, more intimate, more 'in focus', with that 'produced' polish that EQ so often fails to deliver. I'm pleased to say that both plug‑ins have survived the migration from the Powercore platform without any change in performance, and that both are as valid now as when they were developed a few years ago. The exact details of the underlying technology are still a bit of a mystery, but when something works as well as these two plug‑ins and in such an easy‑to‑control way, the end certainly justifies the means.