Tablet Positioning System By Will Betts

The Tablet Tail Monkey Kit from Octa is a 'tablet positioning system' that is comprised of a suction cup and a long flexible tail. The hemispherical suction cup attaches to the back of any tablet with a smooth finish. Pressing the chunky pump button a few times evacuates any air from the cup, and when the button is flush with the rest of the hemisphere, the seal is secure. When the button starts to pop out, it indicates that the seal isn't so tight. 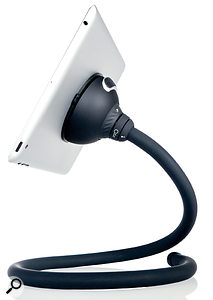 The tail itself is three-feet long and made from the sort of snakey, flexible material you might find on a desk lamp, but covered in black rubberised plastic.

Octa suggest that the Tablet Tail Monkey Kit is suitable for attaching your tablet to a mic stand, allowing you to read lyrics or music while recording, rehearsing or performing. Having used it with both an iPad Mini and the notoriously heavy third‑generation iPad, I can say there were no problems with it losing its shape. The tail is reassuringly sturdy in its construction, yet will not overbalance even a bog‑standard microphone stand.

Unfortunately, the suction cup is less impressive. Initially, the Tablet Tail held my iPad Mini perfectly well for a full working day at a time. In fact, I had become so confident in the strength of the suction cup that I forgot my iPad was even attached to the Tablet Tail. Somewhere between two and three days after affixing my iPad to the device — which was comfortably wrapped around a mic stand some six-feet off the ground — my iPad fell unceremoniously to the floor. I didn't witness this calamity, so can't say whether it was a change in temperature, barometric pressure, some kind of vibration or the interference of ne'er‑do‑wells that brought my tablet to grief, but my advice would be to remove your tablet after each session and check the seal at least every day or so. It doesn't really help that the pump button that alerts you to a lack of suction is hidden behind your tablet. When the seal begins to fail, there's an ominous creaking sound. Once you hear this, you might have anything from a few seconds to an hour to act.

After carrying the kit around for a few weeks, the effectiveness of the seal did wear off. I tried cleaning the seal as instructed, but to no avail. It wouldn't hold my lightweight iPad Mini for more than a couple of hours. I have to assume that I must have somehow damaged the suction cup in transit and I'd now have a hard time trusting it to keep my iPad safe during the entirety of a performance or rehearsal. That's not to say it isn't useful, though. Open a collaborative Google Document on your computer and the performer's iPad and you have a lyric sheet that can be updated remotely. Coil the tail on a desk and it's a handy stand. That's not to mention the fact it's also very good at removing the glass from the displays of certain iMacs. I've tried.

In short, the tail mechanism is great, but perhaps a clipping mechanism (apparently already in the pipeline) would offer the kind of reassurance I'd want from such a device.