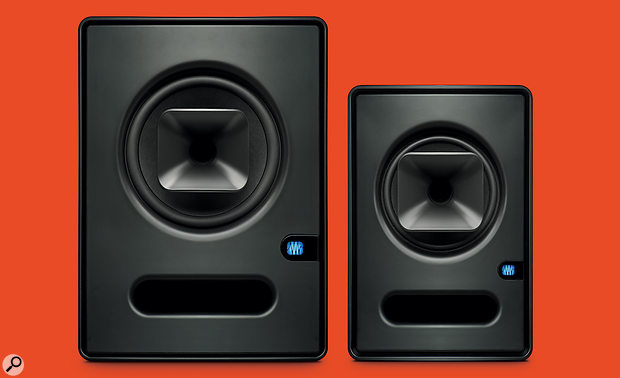 PreSonus' assault on the monitor market continues, with these impressive coaxial speakers.

The first PreSonus monitors that I reviewed were the company's low-cost Eris series models, and I have to confess to being pretty impressed at what they achieved for the price. However, the new Sceptre series aims to provide a step up in quality at a higher price, though they're still pitched to be affordable to the project studio operator. Unlike the Eris models, these speakers employ a coaxial topography; a design approach made famous by Tannoy. The obvious advantage of the coaxial design is that the low and high frequencies originate from the same place, rather than from two different drivers spaced apart on a baffle — the practical benefit of which is a wider sweet spot and more precise stereo imaging. The down side is that it is more technically difficult to get right.

In designing these speakers, PreSonus teamed up with speaker-design expert Dave Gunness, of Fulcrum Acoustic, whose 'TQ' algorithms have been integrated into the Sceptre's onboard DSP to coax the best result from the drivers and cabinet, including handling the necessary time alignment between the HF and LF sections of the driver. TQ is short for Temporal Equalization, a proprietary Fulcrum Acoustic equaliser design based on multiple FIR (Finite Impulse Response) filters. The DSP also handles a user-adjustable EQ section, where 'step-through' EQ presets on the rear panel allow for room placement and personal voicing preference.

Available in both 6.5-inch and eight-inch versions, the Sceptre monitors have 90W of Class-D amplifier power per driver. The one-inch compression tweeter section is loaded by a rectangular horn that controls the HF dispersion in the horizontal and vertical plains. This is integrated into the centre of the main driver, which sports a glass-reinforced paper cone.

The front-ported cabinets, which have a neat black-plastic foil finish, are built from MDF and have curved front baffles. These are actually quite large cabinets in comparison with many competing models of the same driver size, with the S8 measuring (Width/Height/Depth) 290 x 338 x 400 mm and weighing 11kg. The S6 measures (Width/Height/Depth) 230 x 310 x 335 mm and weighs 8.53kg.

Safety features include RF shielding, current-output limiting, over-temperature protection and subsonic filtering. The amplifiers also power up slowly to avoid pops and bangs. The S8 eight-inch model has a frequency response extending from 46Hz to 20kHz (-3dB), while the S6 delivers 52Hz to 20kHz (-3dB). The crossover frequency is slightly different for the two models, with the S6's set at 2.4kHz and the S8's at 2.2kHz. The peak SPL is quoted as 109dB for the S6 and 116dB for the S8, both measured at one metre.

All the connections and controls are on the rear panel, where the inputs (balanced XLR or TRS jack) can be found, along with a variable control to adjust the gain. Mains comes in on the usual IEC connector, with an adjacent power switch and LED, and the voltage is factory set, either to a nominal 110V (USA) or 230V (Europe). Those aforementioned EQ settings comprise the HF driver level (0dB, +1dB, -1.5dB, -4dB), an acoustic space setting affecting only the LF driver (0dB, -1.5dB, -3dB, -6dB) and a 24dB/octave high-pass filter (off, 60Hz, 80Hz, or 100Hz). This latter control can trim the bass end to provide an impression of how the mix might sound on domestic speakers with less extended lows. Each of the setting options is denoted by an LED and a button at the bottom of each row of values steps through the available options. 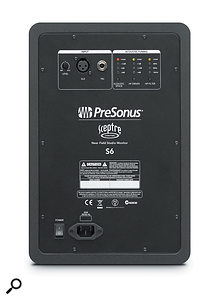 The rear panel houses the input sockets, as well as the controls for adjusting the built-in EQ.

A logo panel lights up red when the speakers are powered up, then turns blue after a few seconds indicating that the speakers are ready for use. Having listened to the Sceptres using a wide range of pre-recorded material, the bass end of the S8s came over as solid but not exaggerated, and despite the cabinet being ported, it still sounded reasonably tight and well controlled.

As expected from the coaxial design, the tonality held up well over quite a wide listening area, with a good sense of stereo placement and a stable phantom centre image. With the initial settings, the highs were a little forward-sounding for my taste, but dropping the HF a notch or two using the rear panel EQ controls brought about a better balance, as did setting the LF 'environment' filter one notch down to allow for my placement of the speakers, which was close to a wall but away from corners. It is probably fair to describe the sound as revealing and involving, with a good sense of being able to hear depth in the mix. Imperfect mixes have nowhere to hide, which includes many CD releases of material recorded back in the '60s and '70s. Harshness and distortions show up very easily, but when the same focus is brought to bear on a good mix, the quality certainly shows through.

Switching to the S6s, there was no dramatic curtailing of the lows and there was still more than enough SPL for comfortable listening. That slight trimming of the bass extension and the slightly higher crossover frequency did, if anything, bring the mid-range into even sharper focus, though as before I had to drop the HF level a couple of notches to get what felt like the right balance in my own studio.

Summing up then, I'd have to say that the S6s and S8s perform really very well within their price range, and although they are not perfect (what monitor is?), they are effective mixing tools that will help you balance your projects, and will pull no punches when it comes to sorting the good sounds from the bad. Such flaws as they have are common to many monitors that inhabit this price range, specifically that there is inevitably a little bass smearing due to the use of porting. There's also a slightly forward quality to the HF voicing, but in context these are very minor transgressions and it could even be argued that they make you fight that little bit harder to achieve a more polished mix. The pros far outweigh the cons insomuch as the imaging is excellent, the mid-range clarity is appealing and the sense of a mix that extends in three dimensions is better than from many competing speakers. It looks like Presonus have done it again; I was really impressed with their budget Eris speakers and now the Sceptres firmly establish the company's position in the mid-priced monitor marketplace.

In the dual-concentric monitor market, the Equator Audio D8s that we reviewed in our January 2014 issue come closest in terms of both price and performance, and of course there's always Tannoy...

These are both excellent speakers given their prices, though I have to admit that I was drawn towards the overall sound of the S6s slightly more than the S8s. Unless you have a large studio space, the S6s should be more than adequate.