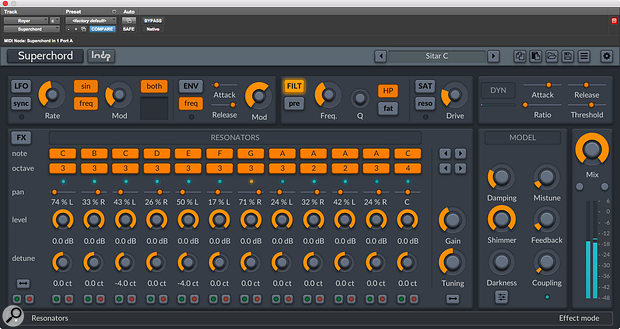 There is a reasonably well-known technique for creating weird pitched ambiences that involves reamplifying sources into a grand piano with the sustain pedal held down, thus using the piano strings to create sympathetic resonance rather than actually striking them with the hammers. Superchord from LMDSP is a plug-in that takes this concept as a starting point for an incredibly versatile range of riotously creative effects.

The role of the piano strings is played by 12 ‘resonators’ — physical models of a vibrating string — each of which has its own octave and note value, pan position, level and detune amount, plus console-style mute and solo buttons. Setting each resonator up individually can be time-consuming, but LMDSP have thoughtfully provided global increment and decrement buttons for the octave and note values, and a right-click contextual menu that allows you to do things like set all resonators to the same note, or to be the same interval apart. A further button replaces the detune controls with adjustable delay parameters.

Perhaps the most interesting set of controls are those found in the Model section, which adjust the parameters of the physical model. Some, such as Damping and Darkness, are relatively self-explanatory, while Shimmer controls the decay time of upper partials relative to the fundamental, Mistune adjusts “the relative tuning between horizontal and vertical polarizations” of the three-dimensionally modelled string, Feedback relates to the link between these modes of vibration and Coupling introduces sympathetic resonance between resonators, which slides pleasingly into saturation at high levels. A further panel of Advanced controls can be opened up if you really want to fine-tune the behaviour of the model.

The creative palette is further extended by simple Drive and Filter sections, an LFO and an envelope follower, either of which can be targeted at amplitude, global resonator pitch or filter cutoff. What appears to be a straightforward compressor actually governs the non-linear behaviour of the modelled strings at high amplitudes.

All in all, Superchord presents a lot of controls, some of which are unpredictable until you get to know them, but LMDSP have added a lot of neat user-interface features that help you get results faster, such as the useful but unobtrusive window at the bottom of the screen that provides information about whichever control you are hovering the mouse over. There’s also a compact but impressive selection of presets that really showcase the creative possibilities. These are enormous, and include the ability to drive the resonators from MIDI, thus turning Superchord into an intriguing virtual instrument.

I strongly recommend downloading the demo and having a play around for yourself, but for my money, where this plug-in really shines is in its ability to create effects that are otherworldly yet believably organic. During the review period I was given a project to mix that was mostly acoustic, but incorporated some sparse electric guitar chords; using Superchord, I was able to give these an effective ‘Is that a real instrument or isn’t it?’ quality, adding a sense of mystery and sonic interest without undermining the basic acoustic, folky texture of the track. And that’s just one example: other possibilities range from pitched reverbs through 12-string and sitar emulations to full-on sound-design madness. I’ve tried reamplifying things through actual pianos, and it never works this well in real life!