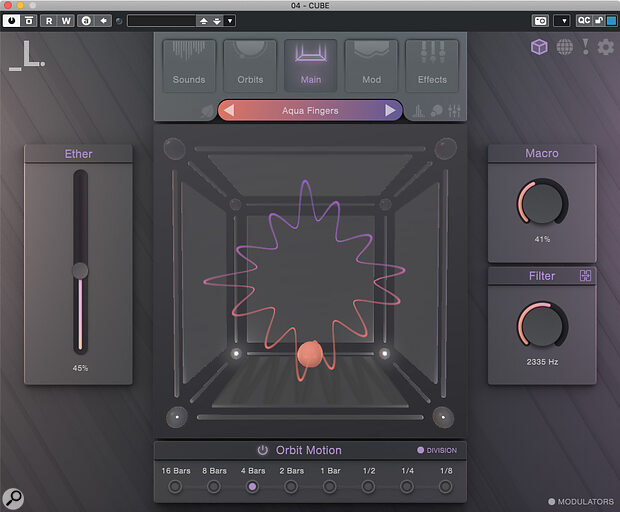 Cube’s Main page with access to the key macro‑style controls and the interesting Orbit system for blending between up to eight sound sources.

Cube is the first product from the Lunacy Audio development team. And, as far as their launch philosophy goes, on paper at least, Lunacy seem to be following a ‘when you go, go big’ strategy. Cube looks like an ambitious virtual synth instrument with a sophisticated, multilayered sound engine and with plenty of modulation and effects options. It also launches at a price that suggests it’s aimed at the more serious end of the software synth marketplace rather than the more casual user.

Cube runs either standalone or as a 64‑bit plug‑in (AU, VST or AAX) within suitable Windows or Mac OS DAW hosts. It ships with some 3000 underlying samples (2GB of drive space is required) and an impressive collection of 400 presets. There are already preset expansion packs available (some free and some paid) if you want even more sounds to explore, and you can also drag‑and‑drop your own samples into the instrument.

A synth engine built around the concept of layering and blending multiple source samples to create sounds is perhaps not a new concept. For example, Sample Logic have a whole line‑up of impressive virtual instruments — Morphestra 2, Cinematic Guitars Infinity, Symphonic AI and CinemorphX included — that all offer the option to combine up to four source samples, where each sound essentially sits on one of the four corners of an X/Y pad, which can be used to modulate the blend between them in real time.

In essence — and as can be seen in the first screenshot, which shows the Main tab — Cube takes that concept a step further by adding a Z dimension to the blending process, giving you up to eight source samples to blend between, each sitting at the vertex of a graphical cube. As with Sample Logic’s products, you can automate, or control in real time via suitable MIDI CCs, the node within this three‑dimensional cube space to adjust the blend. Cube’s own automation of this is done via ‘orbits’ (pathways within the space) and the instrument includes a well‑stocked set of preset orbits. The Orbit tab provides all the controls you need to tweak the orbit motion. This includes tempo‑sync’ing to your host with divisions between 16 bars and eighth notes. The preset orbits can be edited and you can also create your own by defining a series of steps within the 3D space.

The Main tab also includes three top‑level performance controls for easy sound‑shaping. The Filter section provides a simple low‑pass filter but is a very effective way to adjust the global tonality. Macro can control any number of the engine’s underlying parameters, as configured within the flexible modulation system (see below). Less obvious, but very interesting, is Ether. For the presets, the underlying sound selected for any of the eight sound slots is actually represented by two samples with contrasting intensity, and the Ether slider adjusts the blend between these two. It provides a very simple — and very effective — means of controlling the dynamics of your overall sound. Cube’s response to MIDI velocity is actually very subtle, so the Ether slider is where a lot of the dynamics action is at.

The Sound Of A Cube

Whether exploring global presets in the Main tab, or looking for individual sounds for one of the eight slots in the Sounds tab, the browsers are well organised and offer useful tag‑based selection. The underlying sounds are drawn from over 100 different instruments including synths, basses, pads, one‑shots, percussion, pianos, plucked instruments and a whole lot more; it’s a diverse starting point and, while you don’t have to have all eight sound slots active in every preset, simple maths means you are unlikely to run out of novel sonic options any time soon. And, as sample selection is just one element of Cube that includes a randomise feature (you can also randomise the orbit and effects settings), there are endless pot‑luck options available to inspire. 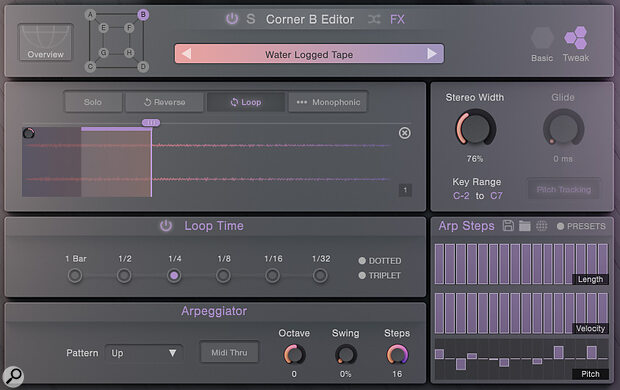 Each of the sound layers has its own control set including individual arpeggiator functions.

Each of the eight sound slots features two levels of individual controls specific to that sound slot. Under a Basic tab, you can adjust the sample start point, looping, ADSR envelope, tonal shaping, pitch, pan and volume. The Tweak tab then provides options to activate and configure the arpeggiator functions for that sound slot. There’s plenty to tweak and perhaps the only ‘gotcha’ to be aware of is that the step sequencer for Pitch — while perfectly functional — is not key or scale sensitive; you simply set semitone shifts relative to the root note played.

Cube’s sound modulation options are impressive. The Mod tab offers two sub‑screens. The first allows you to configure the behaviour of the four LFOs (each of which can be toggled to operate as a step‑based modulation source if preferred) with all the usual controls over tempo sync, LFO waveform shape (including a custom option where you can define your own) and options such as intensity and smoothing. In step‑based mode, you can adjust the number of steps and the modulation amount for each step.

The second sub‑screen provides a modulation matrix, allowing you to link modulation sources — the four LFOs/step‑patterns or the Macro knob — to up to 16 of any of the available target parameters within the synth engine, and to adjust the intensity of the modulation. A single source can be linked to multiple targets. The basic operation is simple enough, but it allows for some pretty complex modulation options. It would be great to see MIDI velocity also included as a modulation source. 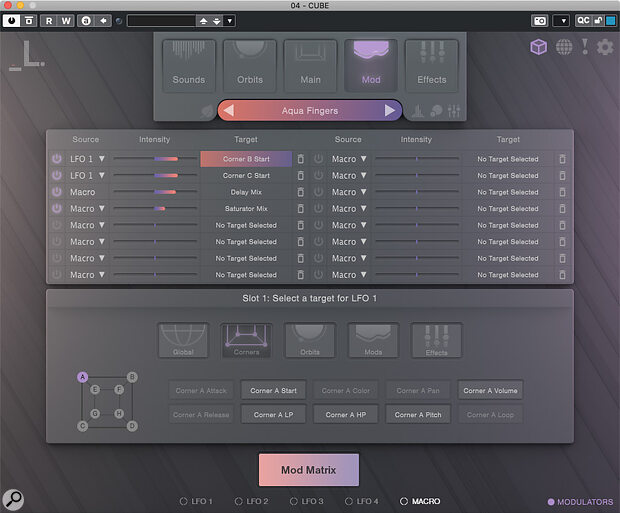 The Effects tab provides access to a chain of effects including filter, EQ, distortion, dynamics, chorus, delay, reverb and limiting. It’s a fixed sequence but sensibly organised and each effect type has a useful set of individual controls. The filter offers low‑pass, high‑pass, band‑pass and notch options, all of which are effective; the delay offers separate left/right delay times; and the reverb includes both simple and convolution choices. However, my favourite was the distortion option. This includes separate saturation, wave‑shaping and bit‑crushing stages and is particularly effective for dialling in the required amount of aggressive edge you might want to add to a preset.

So much for the broad features of Cube, but what does it actually sound like? Well, very good indeed. In terms of the supplied presets, they cover a lot of ground. There are plenty of complex pad/soundscape options where, as you might expect, the ability to blend so many underlying samples can provide an almost endless variety; no more static, lifeless pads unless, of course, that’s exactly what your project needs. There are presets that reach very much into sound‑design territory and that media composers could make a complete soundscape bed out of for the right suspense/tension cue. For electronic pop/dance music or media use, there is a good range of bass, lead and key sounds, all with lots of interest and sonic movement. Some of my favourite presets, however, popped up from the Arp, Pulse and Pluck filters, and I can easily imagine building film/TV‑type cues around these.

While the availability of eight sound layers might suggest (a) that Cube is complex to build sounds within and (b) that it might be somewhat resource heavy, I’m not sure either actually apply. You don’t have to use all eight layers to create some great sounds (there are plenty of presets that are based upon four sound layers, for example) and, while the full range of options contained within the UI does take a little time to become familiar with, each component is straightforward to use. Equally, you can disable any unused sound layers and toggle off elements of the graphical display as a means of conserving a few CPU cycles.

The ability to blend up to eight different sound sources into a single preset creates all sorts of sonic possibilities.

Cube represents an impressive debut from Lunacy Audio. While the UI perhaps does require a short period of familiarisation on first use, once that’s done, the ability to blend up to eight different sound sources into a single preset creates all sorts of sonic possibilities. The supplied presets ably demonstrate the potential and Lunacy Audio are already off the mark with preset expansions. That said, creating your own sounds is both straightforward and rewarding. My personal wish list item would be to coax more from MIDI velocity, both for volume dynamics and parameter modulation. Having spoken to the development team during the course of the review, it’s obvious they have some ambitious plans for future updates and I’m already looking forward to what’s to come. That said, even in its current iteration, Cube is in very good shape.

The most obvious user base is going to consist of electronic music makers and media composers, and it’s very easy to imagine it doing good service in both contexts. Providing you can stretch to the required asking price, Cube is well worth exploring.

Cube represents an impressive start for Lunacy Audio. The engine provides a powerful platform for anyone designing sounds for electronic or cinematic music production.