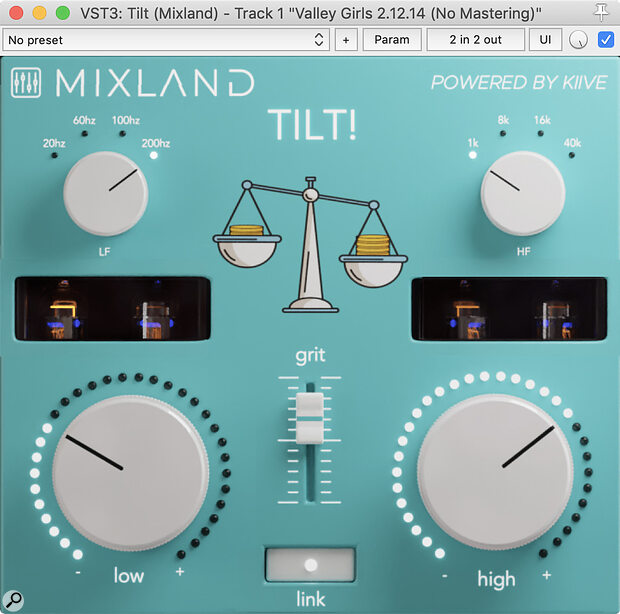 Tilt! is a neat and genuinely useful plug‑in with a refreshingly simple GUI. It’s available for Mac (10.7 and up; M1 supported) and Windows (7 and higher) operating systems in VST3, AU and AAX formats. At heart, Tilt! is a pair of modelled shelving filters, each with a switchable turnover frequency. The low band can be set to 20, 60, 100 or 200 Hz, and the high shelf to 1, 8, 16 or 40 kHz. They each have a gain control marked with virtual LEDs which light to indicate the current position, but there are no numerical values on display, presumably so as to encourage you to use your ears.

Just instantiating this plug‑in applies a subtle EQ curve, presumably due to the modelling approach, the effect being to warm the bottom end and take the edge off the upper mids a touch — nothing too dramatic, though. More interesting is that the two bands’ gain controls can be inversely linked, so that applying gain with one control turns the other in the opposite direction — a little goes along way in nudging a source in the desired tonal direction. A set of virtual scales indicates the current degree of ‘tilt’ like an inverted EQ curve: boosting the bottom end makes the line slope up from left to right (as indicated on the graphic, there’s more low end ‘weight’ pulling down the scales!).

Where some tilt filters pivot around a single, shared frequency, that’s not possible here since there’s no overlap of frequencies, but in this incarnation you retain the ability to specify a separate frequency for each filter, which can be really useful, particularly given how high the HF shelf can be set (40kHz is obviously well outside our hearing range, but the shelf’s curve extends way down into the audible band so as to lift the breath/air/sizzle frequencies). You can turn a single knob to make a source generally brighter or darker, and can then tweak the frequencies to adjust to taste. So it’s easy to use and potentially very useful: while pretty much every DAW now has shelves and modelled tubes available, there’s a lot to be said for the simplicity and I think Tilt! could probably help you mix faster.

I have a couple of minor criticisms that should be easily addressable in a future update and neither of which would dissuade me from using Tilt! as it is. The first is that if you’re using the two filters independently, there’s no way to then link them and retain the offset you’ve already dialled in: hit the link button and turn one knob and the other will jump to the opposite value. The second is that when you link/unlink the filters, the ‘scales’ change — when unlinked, they seem to indicate a flat frequency response when in fact the filter is still being applied, just as it was before.

Another handy addition is a modelled valve output stage with an associated Grit control. Without even touching the Grit fader, this stage can have an audible effect, since you’re effectively EQ’ing ‘into’ it and that can drive the stage into saturation. Slide Grit up and you start to hear more of this subtle, musically pleasing distortion, and there’s plenty of scope to push it further, well into the spluttery territory of tube clipping. The latter is not generally my thing (though can be cool on synth basses, sustained electronic kicks and the like), but the subtler end of the scale is eminently usable, and it’s obviously better to have more on tap than you need than too little!

I think Tilt! could probably help you mix faster.

The bottom line is that this simple plug‑in could save you time, and if you’ve not used a tilt filter before it could be helpful in training your ears too. The price is competitive, but if you want a taster course then there’s both a free 14‑day trial available, and a completely free cut‑down version called freeTilt!, in which the filters can’t be unlinked and the frequencies are preset. Worth checking out.