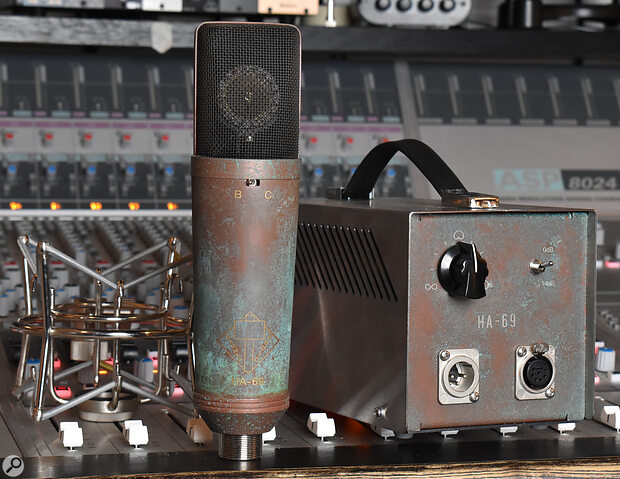 Hammer Audio are made up of North London‑based engineers Max Gale and Ed Marks, and their first release was the HA‑872, well received by Paul White in his SOS December 2016 review: www.soundonsound.com/reviews/hammer-audio-ha-872. That mic has successfully found its way into several pro studios, in what is a very competitive market. Because of Covid and other factors, It’s taken a few years for Hammer Audio to release their follow‑up, but for review here we have the new HA‑69: a striking large‑diagram valve capacitor microphone that boasts some innovative features. Unlike that of Hammer Audio’s first product, the name doesn’t obviously suggest an inspiration from the vintage world. Hammer explain that the HA‑69 isn’t a direct clone of a particular model, but is inspired by the circuit of the Neumann M269, a variant of the famous U67 that was created to meet the requirements of the German broadcast sector.

I’ll describe some of the technical aspects of the HA‑69 in a moment, but it’s certainly worth taking a moment to discuss the bold styling of this boutique microphone. Both the microphone body and the front of the power supply are made from brass that has been treated using a sped‑up ageing process, akin to the oxidisation that occurs on metals left near the sea — the Statue of Liberty being a large example! The process means that every mic is unique, and produces a distressed turquoise‑type effect that I found to be very appealing. Whilst it won’t be to everyone’s tastes, we all thought it looked very cool at my studio, and I always admire manufacturers who try to do something a little different.

The HA‑69 is hand‑built in the UK, with all the wiring point‑to‑point and hand soldered, and high‑quality components such as custom‑made Sowter transformers used throughout. Whereas the U67 used the common EF86 pentode valve, Neumann designed the M269 circuitry around the subminiature Telefunken AC701. This is now extremely expensive and hard to obtain, so Hammer Audio have employed another subminiature valve in its place: the Mullard EC70. The capsule is Peluso’s P‑K 67, a direct copy of the Neumann K67 capsule used in the M269.

The HA‑69 has a lot of features for a mic of this style — or any style — with the most noticeable being the option to switch between two entirely different electronic circuits at the flick of a switch. This switch incorporates a momentary ‘soft mute’, allowing you to safely audition the two options without any loud pops damaging speakers or eardrums. The only other microphones I’m aware of that allow you to switch between different circuit topologies are Lewitt’s LCT 940 and 1040, neither of which I’ve tried, so I was intrigued to see how useful this would be in a studio setting. Hammer describe the ‘B’ option as having a more full‑bodied ‘valve style’ character, with ‘C’ sounding a little more neutral. As well as these two broader options, the mic features a switchable ‘voicing circuit’ switch that boosts the higher mids slightly for use on darker sources. It doesn’t stop there, either: controls on the power supply offer two high‑pass filter options (80Hz and 180Hz), a pad and a sweepable polar pattern control which allows you to choose between cardioid, omni, figure‑8 and various options in between. Lastly, the mic and power supply come in a rugged carry case, with a good‑quality shockmount and cabling.

I was recording a lot of acoustic instruments around the time I had the HA‑69 in for review, and it worked superbly for anything that needed a neutral but slightly flattering capture. I could hear a very slight presence peak around 8‑10 kHz when recording acoustic guitar, which brought out the articulation of the strings very effectively without overdoing things. The low mids had that manageable sense of fullness you get from a nice valve mic, and I found that switching to the ‘C’ voicing pulled this in slightly if needed.

I also used the HA‑69 on several vocal recording sessions at my studio, and it performed very well indeed. There was one male singer whose sibilant frequencies collided directly with that 8kHz peak, but otherwise the HA‑69 ticked all the boxes that I would expect of a high‑quality valve microphone. Vocals had a good sense of depth, and on louder singers, you could hear a slight compression‑type effect that was very pleasing. I’m not the kind of engineer who likes to fiddle around too much with settings on a mic, but the extra features on the HA‑69 are well thought‑out and would definitely give you some versatility if you don’t have lots of mics to choose from. On most sources, the difference between the ‘B’ and ‘C’ circuit options is noticeable but subtle. I would agree with Hammer themselves that the ‘C’ option makes things sound a tiny bit less full in the low mids, and a bit more neutral. The soft mute feature works very well, and it’s perfectly feasible to switch between the two options without having to mute your input — on more than one occasion I got the singer to make the switch for me!

The ‘voicing circuit’ switch is a worthwhile feature and makes the mic’s response usefully brighter if you have a darker source in front of it. I didn’t find I needed this very often, but it worked well on one acoustic recording that required a bit of a lift. Likewise, I rarely found I needed to explore the ‘inbetween’ polar pattern options, but the HA‑69 sounded very nice indeed as an ambient mic on drums and other instruments in omni mode.

The HA‑69 is an impressive‑sounding valve mic with a very distinctive look.

The HA‑69 is an impressive‑sounding valve mic with a very distinctive look. It also has several features that allow you to subtly change the personality of the sound whilst staying with the comforting confines of a good‑sounding design. The soft switching feature also appears to be a genuine piece of innovation in what is a very well‑trodden path of microphone design. If the looks are to your taste, my only concern would be the price, as it would be a substantial investment to make on a mic from a relatively unknown company. This isn’t a criticism, however: it simply reflects how much it costs to hand‑build a mic of this calibre in very small numbers.

This is a hand‑crafted, boutique product that is built to order, and there are elements to the design that can even be tweaked slightly to suit your needs, which I’m sure might appeal to some. All the engineers at my studio, myself included, enjoyed spending time with the HA‑69 a great deal. It would be well worth auditioning if you’re looking for a premium‑quality, versatile mic for vocals and all‑round studio use.

HA-69 Hear For Yourself

I've supplied a few audio examples so you can hear how the mic fared on acoustic guitar and male vocals, using a variety of circuit and voicing combinations. For all the recordings, I used the relatively neutral sounding preamps on my Audient ASP24 mixing desk.

Download the hi-res WAV files and audition in your DAW, or play the MP3s below for convenience.

A short example of an acoustic guitar recorded with the HA-69 in its 'B' Setting. The mic was positioned about 8 inches from the guitar and roughly pointed towards where the neck joins the body of the instrument.

The same acoustic guitar part but recorded with the voicing circuit engaged to give slightly brighter sound.

The same part but this time using the 'C' circuit.

The 'C' circuit with the voicing circuit engaged.

An example of how the HA-69 fared on a Male voice using the 'B' circuit.

The same part but this time using the 'C' circuit.

Hammer Audio’s second release is a bold‑looking large‑diaphragm valve mic that features several subtle but worthwhile features for adjusting the capture of instruments or vocals. The looks might be original but the sound is both classy and reassuringly familiar.