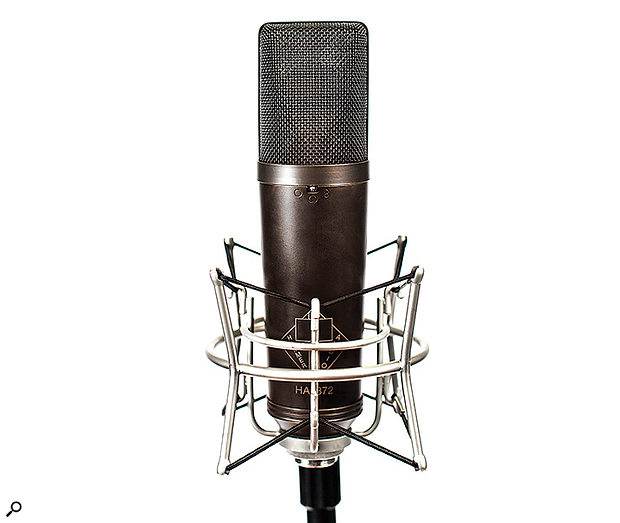 Have Hammer Audio hit the nail on the head with this new UK-made mic? We think so!

British company Hammer Audio were set up in 2015 by designers Max Gale and Ed Marks, both of whom have worked in music production for many years. In fact both Max and Ed still work as writers with SilverHammer Productions, the parent company to Hammer Audio. Their first manufacturing venture under the Hammer banner is the HA-872 microphone, a UK-made, handbuilt, multi-pattern model that has definite leanings towards classic capacitor microphone tonality. It features switchable omni, cardioid and figure-of-eight polar patterns, accessed via a miniature toggle switch inset into the mic body, and uses traditional FET circuitry teamed with a 34mm-diameter, centre-terminated, dual-diaphragm capsule. Standard 48 Volt phantom power is required for operation.

Each HA-872 is handmade, with only the chassis metalwork being of Chinese origin — and even that is plated and engraved in the UK. The K87i capsule is made by Peluso in the US, a company well-known not only for building their own mics, but for making very high-quality replacement capsules for a number of classic microphone models. This particular capsule is sold as a direct replacement for the Neumann U87A and U67, where the capsule cost alone is more than some people charge for an entire microphone!

The circuit board, designed specifically for use in the HA-872, uses very high-quality parts including WIMA capacitors, and is again manufactured in the UK. A transformer output feeds the usual balanced XLR connector, but again, this is a custom-built Sowter component rather than an off-the-shelf part.

Hammer have the bodywork plated in a way that gives each microphone a slightly different aged, dark-bronze, antique look, which makes a change from the usual blacks and greys. The engraved Hammer logo on the body depicts the hot side of the mic when in cardioid mode and the positive side in figure-of-eight mode. HA-872s can be bought singly or in matched pairs, and come in an aluminium camera case with a sturdy wire-frame shockmount and a good-quality three-metre XLR cable.

A novel aspect of this mic is that it can be switched between two voicings, a benefit that seems so obvious that it makes you wonder why few others have explored it — the only rival that springs to mind is the Miktek C7e I reviewed in SOS March 2016.

In Classic mode, the Hammer HA-872 leans towards the FET microphones of the ‘70s with their smooth highs, but as an alternative, the voicing switch can be flipped to deliver a more modern, airy high end. For the low end, a high-pass filter can be switched in at 180Hz or 80Hz, or left flat. The maximum SPL is claimed at 142dB at 1kHz, which means there’s no requirement for a pad switch. The frequency range of the mic extends from 20Hz to 20kHz (-6dB at 50Hz), and the sensitivity is 10mV/Pa. Self-noise is specified at a respectable 14dB.

In use, the mic doesn’t impose too much of an obvious character onto the sound, which suggests that any presence peaks are subtle and that any added ‘flattery’ is retrained enough not to give the game away. In Vintage mode there is a subtle smoothness to the highs, which can be useful in rounding out some voices without actually dulling them. Switching to the more modern voicing opens out the top end in an airy but natural way without anything feeling overdone. This is where choosing a good-quality capsule really pays off, as some of the lesser alternatives exhibit prominent resonances at the top of their frequency range that can really show up on some sources, especially female vocals that include a lot of high-frequency content. These resonances often manifest as a fatiguing harshness on the high notes, but there’s no evidence of brashness with this capsule. Importantly, a smooth high end means there’s more opportunity to use EQ to shape the highs before harshness sets in.

My speech tests confirmed that the mic delivers a subjectively natural sound, and having the two different low-cut filter settings helps tame the proximity effect when working up close using either the cardioid or figure-of-eight patterns. Both voicings sound ‘right’, despite the intentional difference at the high end — the numerical designation of the capsule probably gives you some idea of how this mic might sound! 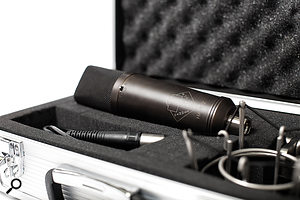 The HA-872 ships with an XLR cable and shockmount, in a protective carry case.This sense of being natural also applies to acoustic guitar, where what you hear on playback is very close to what you hear in the room. There’s a fullness balanced by detail, but without any scratchy high-end hype. To my ears the more modern voicing works best in this application, allowing a little more air to settle around the sound, though the Vintage setting could be useful in smoothing out instruments that have a brash edge. At no time did background noise become evident, and though the HA-872 is a few dB less sensitive than some mics I’ve tried, getting enough gain was never a problem (and the lower sensitivity probably accounts for the high SPL handling capability without recourse to pads).

Switching patterns reveals a surprisingly consistent vocal tonality, albeit with the predictable changes to the proximity bass boost when working close to the mic. In cardioid mode the tonality stays reasonably consistent up to 45 degrees off axis, and the rear of the mic exhibits extremely good rejection. As expected, the 90-degrees off-axis rejection in figure-of-eight mode is close to perfect. I’ve used various mics where the tonality changes quite noticeable between patterns — so the level of consistency here, which I suspect is mainly down to the high-quality capsule, should be applauded.

When choosing a microphone, we invariably suggest trying a few to see which best suits your voice, but it’s also true that the fewer vices a mic has, the more voice types it is likely to be able to deal with in a sympathetic manner. That’s why you see so many Neumann U87s in pro studios: they can be relied on to deliver good results with a wide range of singing voices. By paying the (considerable) extra for a K87i capsule and then matching this with high end electronics, the HA-827’s designers have managed to produce a no-compromise microphone that wouldn’t be out of place in any professional studio. Furthermore, the dual voicing switch only adds to its versatility, where the lack of any obvious vices means that it should produce good results on a wide range of instrument types as well as voices.

Hammer Audio don’t expect to be shipping the production model of the HA-872 until early in 2017, which gives you plenty of time to save up for one. It is clearly a thoughtfully designed microphone using very high-quality parts and may well present a more affordable alternative to those high-end German and Austrian icons without sacrificing anything in the way of quality. Having said that, it is still far from cheap, with a projected retail price of £1300 including VAT$1800. The big question is that even if the HA-872 proves in every way to be the technical equal of the microphone it is so clearly inspired by, will users find the saving enough to tempt them into buying it as an alternative to a tried and tested studio standard that has a solid resale value and may also be viewed by some as a status microphone? Only time will tell.

The obvious alternative is the Neumann U87 or one of its more affordable clones.

A very high-quality microphone built in the UK using a highly specified capsule and quality electronic components throughout.