If you're sequencing hi-hats or other parts that might require muting of one part with another then the Choking feature should come in handy. Any number of parts can be added to a single Choke group, and only one part from that group can be played with priority being given to the lowest part number. 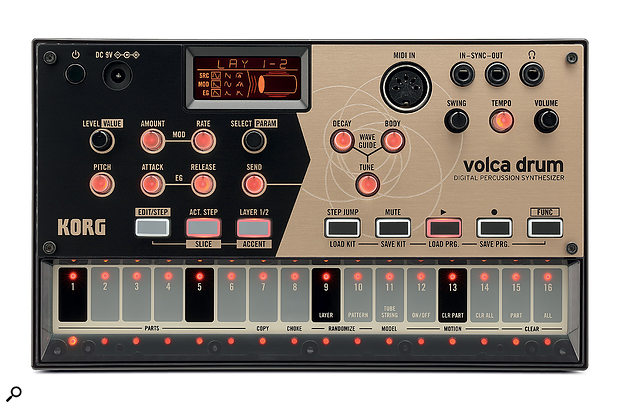 The Volca Drum enjoys the usual Volca form factor, and the MIDI Input that was MIA on the Volca Modular is back on duty here.

By far the most interesting aspect of the Volca Drum sequencer, however, is the addition of Elektron-style parameter locks. It's simple; hold a step and adjust one of the sound design parameter controls to lock a new value into that step. Korg have long offered parameter sequencing, which they call Motion Sequencing, and in fact this new sequencing is just an alternative method of programming Motion Sequences. You can still use the old method of recording the knob changes into the sequencer live by twisting knobs whilst in record mode.

The only limit to this system is that you can only sequence parameters that have clear knob shafts. These controls light up orange to show when sequencing is active for that parameter. Any control with a solid black plastic shaft cannot be automated. Sadly this means that recording changes to the source waveform, frequency modulation type or amp envelope type is not possible. Neither is it possible to record bit reduction, drive, panning or part gain. Despite this, the Volca Drum sequencer is still the most powerful Volca sequencer to date. Hats off to Korg for raising the bar once more.

Korg have also given careful consideration to those wanting to perform with the Volca Drum. For example, when selecting a part the part trigger key will normally trigger the sound, but by pressing the Function Key, you can select a part without the sound triggering. Handy for making tweaks to parts mid-gig. Also, with a pattern playing you can mute selected parts by holding down the Mute key and hitting the relevant part number. Finally, there's the Step Jump function. When enabled, any step number held down will repeat that step at 16th intervals whilst a pattern is playing. It's a nice way to inject some fills or stutter edits into a pattern. Overall, the Volca Drum has enough tricks to keep your patterns becoming too repetitive and enough real-time control to allow you to build up and develop drum parts on the fly.

In order to keep track of all the sequences, kits and sounds, Korg offer two preset types: the Kit and the Program. A Kit is a collection of six sounds and the settings for the Waveguide Resonator. A Program is a set of sequences (one for each part), motion sequences and a Kit number. The fact that Programs only refer to Kit numbers means that if you change a Kit, that change will be reflected in any Program which uses it. Sixteen Kits and Programs can be saved and recalled using the touch-sensitive keys.

At first I thought it was a shame that there's no way to save sequences separately from kits. As it stands there is no way to switch to a completely different sequence without also loading its associated Kit. You get one sequence per Kit. If you're looking for some way to sequence an entire song, you'll have to either employ an external sequencer or carefully construct a set of Programs that use the same Kits. As it turns out, this approach isn't so bad. Because the Programs only reference Kits it means that if you have a bunch of Programs that all use the same kit, you can go back and, for example, change the snare sound in that Kit and have that change reflected across all parts of your song.

The Korg Volca Drum reminds me a lot of Korg's Electribe ER‑1 and I suspect that somewhere, under the hood, there is some shared code. The synthesis engines have many similarities. One of the things I liked about the ER‑1 was how, with just a handful of controls, you could coax out kick drums, hi-hats, snare drums, claps, zaps, lazers, pings, zoops, whoops and other onomatopoeic percussion. The synth engine was efficient and well designed. The same is true of the Volca Drum engine. It manages to create an impressively wide palette of sounds with just a few controls. It's not perfect. An extra couple of knobs or buttons would have gone a long way to making it easier to select modulation and sound sources. The lack of filters can be frustrating too. There are many times when you just want to roll off the top or bottom end of a sound. A basic high-pass and low-pass filter would have been very welcome. But I suppose the art of Volca has always been which compromises to accept and Korg have done an amazing job of squeezing a most capable drum machine into a small and very attractively priced box.

I'd describe the sound of the Volca Drum as clean and digital, whilst retaining a thoroughly electronic edge. I found it came alive when treated by some extra effects. Some compression, perhaps an analogue delay, spring reverb or some extra drive and distortion will really help glue everything together. The high–frequency content can occasionally sound a little harsh, a common artifact when experimenting with digital audio-rate frequency modulation without filters, but it's easy enough to avoid once you learn the synthesis engine.

Performing live is fun. Despite only allowing one-bar patterns, there are enough cool tricks to build up drum tracks in real time. Everything can be programmed, recorded and tweaked whilst the sequencer is running and interesting fills and glitches are easily added using the Step Jump and Slice features.

Overall, the Volca Drum is another great addition to the range. It delivers quirky, flexible electronic percussion by the bucketload and the sequencer is probably the most advanced Volca sequencer yet. I suspect this will be yet another winner for Korg.

Unlike the recent Volca Modular, the Volca Drum does have a MIDI input port. By default, each Part is assigned MIDI channel 1-6. Any note on the relevant MIDI channel will trigger that Part's sound (not chromatically pitching the sound, which is a shame). Parts don't respond to velocity.

In theory, there is a second MIDI mode, which only uses a single MIDI channel, however I couldn't get it to work. The manual suggests that you hold down REC whilst powering up. This does indeed bring up a MIDI channel selection screen, but after selecting a channel, the Volca went right back to using channels 1-6. After some internet research, it seems that this is a confirmed bug in the current firmware (1.11). Korg are aware of it, but no fix has been released as yet.

There is also a full MIDI Control Change map, with individual control over almost every parameter, including the Waveguide Resonator. This is great news for anyone wanting to automate complex sound changes using an external sequencer and even opens up some parameters that the internal Korg sequencer can't reach.

Finally, MIDI program changes can be used to remotely change Programs, which is great for automating pattern and kit changes from an external source.

For details about MIDI Clock support, see the Sync box.

As with all other Volcas, the Sync in and out ports allow you to chain and synchronise multiple Volcas using standard 3.5mm patch cables. Alternatively, you can use MIDI clock to slave the Volca to other groove-based equipment you might have. By default, the Volca will automatically sync if it detects MIDI clock coming in, although this behaviour can be changed to ignore MIDI clock altogether if you prefer.

The new Volca on the block gives you a complete six-voice digital drum machine. It is capable of some excellent sounds, is fun to program and offers some new features only available on drum machines many times the price.