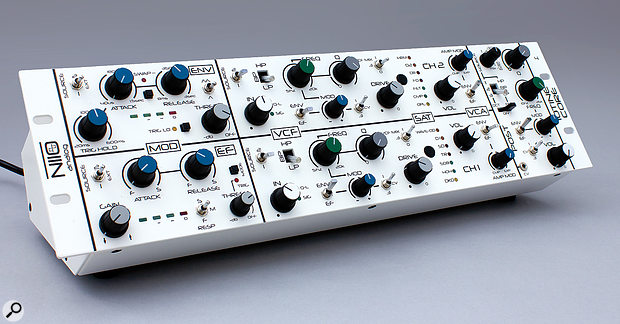 This all-analogue processor is designed to massage, mangle and mutilate your audio.

The filter/distortion effects unit can be a bit of a misunderstood beast. You won't often see them amongst the racks of compressors and EQs in a professional studio. To be fair, there aren't that many around, at least not in a rackmount format. Quite often they are made by smaller manufacturers. Long-discontinued examples can reach cult-like status (and prices) — the Schippmann Ebbe und Flut and Mutronics Mutator are prime examples. And yet, in the studio, they can offer both tonal and dynamic shaping that would otherwise take two or three different effects units to achieve. The Iotine Core 4 is the latest contender in a cult class of analogue processors.

Packed into a 3U rackmount box, the Iotine Core (I'll drop the 4 for simplicity) is a fine-looking effects unit. At its heart are three interconnected channels, comprising multi-mode filters, distortion circuits and VCAs. Two of the channels are almost identical and are designed to be used as dual-mono parallel processors. The third channel, used in parallel or series with the others, also contains a multi-mode filter as well a frequency divider and multiplier. Finally, two modulation sources, in the form of an envelope follower and an audio triggered envelope, are available for filter and amplitude modulation.

Contrary to current trends, the Iotine Core doesn't have a modular-friendly arrangement of inputs and outputs on the front panel — there is one front-panel socket, which I'll discuss later, but in general everything is designed with rackmounting and permanent patching (either directly to your mixer and sound sources, or to a patchbay) in mind. At the rear, there are: two mono balanced inputs, which can be routed to various key points in the signal path using front-panel switches; four balanced outputs, which provide flexibility to route audio from each of the three channels, or from a summed Mix output; and, finally, two unbalanced inputs, which allow you to patch signals directly into the envelope and envelope follower trigger circuits. All audio connections are on quarter-inch jacks. The power supply is internal and all that's needed is a standard IEC power lead. Yay!

All of the I/O other than the CV input are found on the rear panel of this rackmount device.

What's In A Channel?

The two main channels are identical except for their saturation circuits, which I'll come to in a moment. A two-way switch toggles the channel input source between the two audio-input jacks on the rear. This allows quick switching between a dual-mono configuration and parallel processing of a single signal, and by patching the output of one filter to the input of the other, it's possible to have the channels operating in a serial configuration too. An input amplifier allows you to boost or attenuate the signal before it goes into the filter, and a pair of helpful LEDs shows you when a signal is present and when the filter is beginning to soft limit.

The 12dB-per-octave resonant multi-mode filter can be switched between low-, band- and high-pass using a three-way switch. The filter isn't self-resonant. Cutoff can be modulated by either the envelope or the envelope follower, in either a positive or negative direction. Alternatively you can select the CV input as the modulation source, allowing you to use the inputs on the rear to patch in any modulation source you choose.

After the filter comes the saturation circuit, and this is where each channel differs. They each offer a choice of seven different saturation types — so that's an impressive 14 analogue circuits in total. It's an interesting design choice, which on the one hand precludes using the two channels for true stereo operation (the distortion circuits will never match) but, on the other, leaves you really spoiled for choice, with two different sets of drive circuits available simultaneously. The Drive knob controls the amount of saturation and a single button cycles through the different circuits, with a smart array of LEDs showing which saturation circuit is active. There is certainly a good selection here, including transistor, op-amp, diode limiting, wave folding and more. The manual names each one and the front panel is labelled with a shortened, three-letter version beside its corresponding LED, but in practice it's simpler just to keep pressing the selection button until you hit upon a 'flavour' you like. The circuits are loosely arranged in order of severity, with yellow and green LEDs for the softer overdrive circuits, and orange and red LEDs for the more aggressive distortions.

A three-position switch allows you to mix the output of the filter with the saturated signal, so this is essentially a wet/dry mix control with settings for 100, 50 and 0 percent, the last being saturation only. This mixed signal then goes to the VCA. A volume control allows you balance the three channels at the Mix output. Finally, you can apply amplitude modulation from either the envelope or the envelope follower; positive modulation will give you expansion and negative modulation will give you compression.

The two onboard modulation sources are clearly sectioned on the front panel to the left. Both are envelope based. The first is a Hold Attack Release (HAR) envelope, which is triggered by the audio signal coming from either input 1, 2 or the dedicated CV input on the rear. You can set the trigger threshold, and a useful Trig Lo mode can help if you're trying to get the trigger from low frequencies by applying a gentle low-pass filter to the trigger signal. A four-bar LED displays the output of the envelope.

There are three controls for each of the envelope stages. Hold sets the time that the envelope is held open after triggering. It also stops the envelope being re-triggered during that time. The Attack control does much as you'd expect, changing the amount of time it takes for the envelope to rise up to its maximum value. Once the Hold and Attack phases are complete, the envelope enters its Release phase, which will only happen if the trigger signal is below the threshold.

A couple more interesting features complete the Envelope section. The first is the Swap button, which, when enabled, will swap the order of the attack and release controls. This effectively swaps the times of both phases, giving a kind of mirrored version of the envelope — it's a neat way to achieve a different envelope shape that still retains the correct musical timings you've set for your material. The second funky feature is the 'doubled envelope' mode. This folds the attack and release phases so that they rise and fall in the time it normally takes them simply to rise or to fall. So the attack phase will rise to its maximum value then return to zero, at which point the release phase will do the same. Again, this is a cool trick which gives you an alternative envelope shape, while retaining the musical timings you've already set via the attack and release controls.

The Envelope Follower operates in a similar fashion. You can select your preferred source from input 1, 2 or the dedicated CV input. Despite the Envelope and Envelope Follower each having a dedicated input on the rear, if you only plug a signal input into the first input (EF) it will be normalled to the other input (ENV), which is a thoughtful feature. With the Threshold, Attack and Release controls, you set the responsiveness and timings of the envelope follower. There are three response modes: fast, medium and slow. Each one adjusts the high-frequency response of the input signal in order to change the output of the envelope follower, with medium and slow responses giving a smoother output. Again, there's a handy four-segment LED meter to show the output of the envelope follower. A Gain control sets the master output level. Finally, there's a small Mode button which, when engaged, will change the envelope follower to a triggered envelope. In this mode, the envelope will behave more like the ENV modulation source, but with a different response.