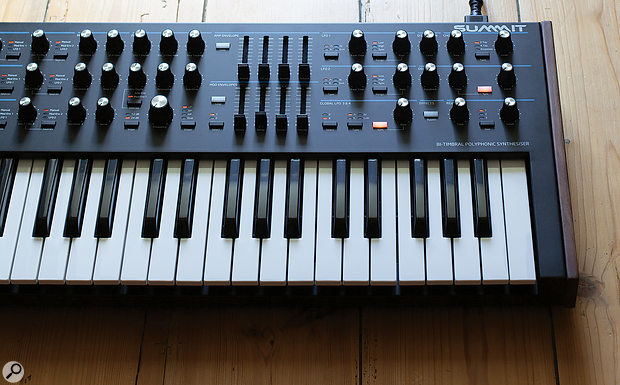 To understand the Summit you first have to understand the Peak, which was reviewed by Paul Nagle in the Sound On Sound May 2017 issue. If you already know the Peak, you can skip the next few paragraphs and jump to the section headed 'New Heights'. If not, read on...

The Peak is an eight-voice desktop unit that generates digital waveforms and modifies them using analogue filters and amplifiers. You can program patches using the controls on its top panel but, if you're serious about sound design, you need to burrow into its menus. These are accessed from a set of dedicated buttons that take you to each of the sections (oscillators, filters and so on) with parameters displayed on the small oLED beneath them. Fortunately, Novation chose to make the on-screen font nice and large rather than cramming lots of information into fewer pages so, although there's more scrolling to be done, the system is more accessible than you might imagine.

Novation named the Peak's oscillators 'NCOs' — Numerically Controlled Oscillators — but don't be deceived by the name, they are digital. I have no problem with this; digital oscillators can sound great, but the name is misleading. Happily, the Peak's are well implemented, providing a wide range of static and dynamic waveforms with minimal aliasing. If you want 8-bit grunge and artifacts, look elsewhere.

There are five waveform options: sine, triangle, sawtooth, pulse and 'More', which, following the Peak's upgrade to v1.2, accesses 60 wavetables, each containing five related waveforms. You can choose any position in a table and use the static interpolated waveform as the basis of a sound, or move smoothly through the table to create dynamic timbres. Using the panel controls, you can modulate the shapes of all the waveforms manually or by using ModEnv1 or LFO1 as sources, or in any combination. Although the modified waveshapes aren't described in the manual, you can view the warping of the sine and triangle waves on an oscilloscope, you can see that the sawtooth is doubled in the common fashion, and that the duty cycle of the square wave is increased or decreased. There's also a programmable SuperSaw function. Other oscillator parameters include key-sync, oscillator sync, programmable pitch-bend on a per-oscillator rather than a per-voice basis, the option to disconnect a given oscillator from the keyboard, and ring modulation. And whereas many digital synths offer some form of random pitch offset to fake the inconsistencies of analogue oscillators, the Peak does rather better, with Divergence (offset) and Drift parameters that provide a more organic imitation.

Following the oscillator mixer (which adds a noise generator with an integrated filter that you can use to create a range of spectra) the signal passes through an Overdrive before being presented to the single, resonant OTA filter per voice. This offers low-pass, band-pass and high-pass modes with 12dB/oct and 24dB/oct options for each, and will oscillate in any of its six modes when the resonance approaches maximum. In the menus, you'll also find another Divergence parameter that adds tuning inconsistencies to the cutoff frequencies of the voices' filters. I like my filters to be perfectly tuned, but you may feel otherwise. On the control panel, filter modulation is provided by LFO1, the output from Osc3, and two contours that you can apply simultaneously to create more complex envelopes such as sforzando. In addition, key tracking can be set anywhere between zero and 100 percent.

A post-filter drive is accessed through the menus, and this adds grit (or, at higher levels, distortion) to the signal generated by each voice and then presented to the VCA section. The existence of the amplifiers themselves is implied by the presence of a contour generator called Amp Envelope, but you'll find the main VCA Gain control in the mixer section, which is not the right place for it.

There are four digital LFOs in Peak v1.2, two of which are per-voice and programmable from the panel, and two of which are global and accessed through menus. LFO1 and LFO2 offer four waveforms, two frequency ranges (the highest of which reaches as high as 1.6kHz) and there's a fade-in time for the usual effects. In the menus, you can also determine the waves' start phases, whether the LFO is sync'ed to MIDI or not, whether and how it's key-sync'ed, and whether it's only retriggered when no previous notes are held. You can also apply slew to modify the waveshapes, choose from four fade-in/out modes and limit the LFO's action to a user-determined number of cycles. In contrast, LFO3 and LFO4 are simpler affairs offering the same four waveforms, a single frequency range and optional MIDI sync.

Although their physical controls describe ADSR contours, each of the Peak's three digital contour generators now outputs a five-stage AHDSR contour following the addition of a programmable H (Hold) stage in v1.2. Other menu commands allow you to make a contour's amplitude velocity-sensitive, to select single- or multi-triggering, and to make its AHD phases loop indefinitely or up to a maximum of 126 times, creating something similar to the classic trapezoid response.

The LFOs and contours are hard-wired to various destinations, but you can direct them to many additional destinations using the Peak's modulation matrix, which was also enhanced in v1.2. This offers 16 slots with two inputs in each, 23 sources (up from 17 and now including polyphonic aftertouch and both wheels) and 37 destinations. Happily, the inputs in each slot are multiplied together so that you can (for example) use performance sources — velocity, aftertouch, wheels and pedals — to control the amount by which another source affects the chosen destination. A single source can control multiple destinations, and you can direct multiple sources to a single destination, but you can't use the output from one slot as a source in another, nor can you use MIDI CCs as sources. Perhaps by way of recompense, you can use an analogue voltage as a source, generating modulation signals externally and then directing these to the CV input on the rear panel.

The Peak's 3‑op FM synthesis also lies within the matrix. This is consistent from note to note and is capable of producing sounds that you won't obtain from either its VA waveforms or wavetables. In fact, since you can use any of its waveforms as operators, you can create timbres that you won't obtain from other FM synths either, ranging from the usual bell-like pianos, chimes and percussion to all manner of harsh, distorted tones.

At the end of the Peak's signal path lies an analogue distortion unit, plus three digital effects: a stereo chorus/flanger, a sync'able stereo delay with slew to create tape-echo effects, and a stereo reverb. These are not ordered in a fixed architecture; you can determine their configuration, choosing from 'all in parallel' or 'all in series in the order that you choose'. Their panel controls are rudimentary, but you'll find many additional parameters in the menus so, while they lack the sophistication of the effects found in some larger synths and workstations, there's still quite a lot that you can do here. Furthermore, a dedicated FX modulation matrix was added in v1.2, and this provides four slots offering 13 sources and 12 destinations. Twentieth-century sci-fi by modulating the tape speed in the delay unit, sir? Coming right up.

It has its own character and occupies its own space both in terms of how you might choose to use it and the sounds that you'll wrest from it.

The Peak also includes an arpeggiator. The panel offers just three controls for this — on/off, key latch and the gate length — so you have to program it in its extensive menus. There are seven modes (up, down, random, and so on), 33 preset rhythms to add complexity and interest, plus various clock parameters, the octave range and key sync, which determines whether or not the arpeggio is reinitialised when you press additional keys. As well as being played internally, arpeggios are output over MIDI so you can direct the results to another sound generator if you wish.

The Peak offers five voice modes: polyphonic (with or without voice cycling), monophonic (with permanent or legato portamento), and an unusual mode called Mono 2 that combines aspects of monophonic and polyphonic responses. You can also pan voices within the stereo field. This can be used with the monophonic modes, but it's more likely to be useful when adding width to polyphonic sounds. In addition, two buttons called Animate 1 and Animate 2 allow you to use the mod matrix to jump from one set of parameters to another, and there are inputs for two pedals.

At the back of the Peak's manual you'll find an extensive MIDI parameter list that includes almost all of the physical controls and voicing functions. As you would imagine, this totals a far greater number of parameters than there are MIDI CCs, so a large number of NRPNs have also been used. This delivers an exceptional amount of automation and control, and to some extent compensates for the lack of MIDI CCs as sources in the modulation matrix.

Finally, we come to microtuning, which was also added in v1.2. You can create, edit and store up to 16 tables that have a note tuning accuracy of 0.4 cents, you can import Scala files, and MIDI Tuning Standard (MTS) messages are also supported.