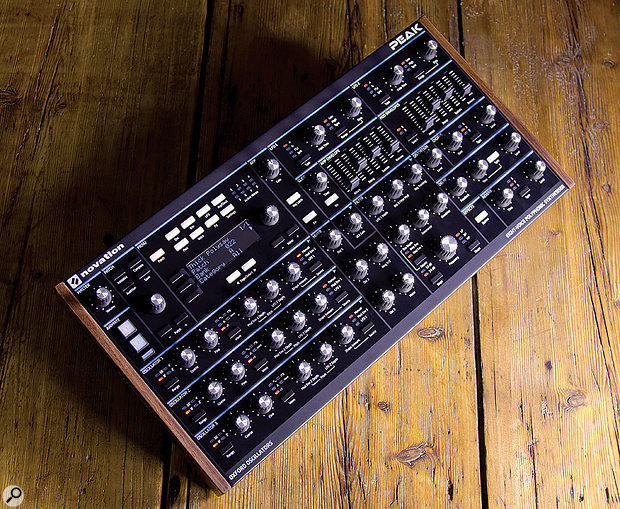 Novation’s ambitious new synthesizer brings together the best of analogue and digital.

We’ve been subtractively filtering the same handful of waveforms for so long it’s often worth stepping back to remember the instruments that took a different approach. Whether this brings to mind the PPG Wave 2, Sequential Prophet VS, Waldorf Microwave or even the humble Korg DW-8000, the effect of an analogue filter on digital waveforms almost invariably lead to unexpected delights. Hence I was rather excited to get an early look at a new synth from Novation. The Peak is a polyphonic synthesizer whose eight voices each have three digital high-resolution oscillators processed by an analogue multi-mode filter. With three envelopes, two LFOs, effects and a modulation matrix this is an ambitious hybrid bidding for its place in history, as well as on your desk or workspace.

The review was conducted using pre-release firmware in which most of the intended functionality was in place. And even though there were only a few example patches, the synth’s accessibility meant I was more than happy to begin filling it with my own highlights.

Picking it up for the first time should leave no doubt the Peak is a hefty chunk of hi-tech real estate. Its metal body is framed in wood and there’s an optional aluminium stand if you prefer angled use (but no rack ears). If you’re partial to stroking your gear fondly to while away the hours there is much to relish here, from the generous collection of sturdy knobs to buttons, encoders and a couple of sets of envelope sliders. It’s an interface optimised for quick results, but when you need the extra detail, there’s a well-stocked menu system supported by buttons for direct page access and page navigation.

Like beneficent fairy godmothers, the Novation team have blessed their offspring with amber LEDs, clear text and an even clearer black and white display (complete with screen-saver) making it universally easy on the eye. Other than the external 12V power adaptor, there’s no visible evidence of cost-cutting; so as you peruse the tasty rear panel, you’ll note the trio of MIDI ports, MIDI via USB, two pedal inputs, a CV input (on mini-jack), a headphone socket and stereo outputs.

The synth is monotimbral and has no voice panning, therefore the stereo output primarily exists to take advantage of the spacious chorus, delay and reverb effects. When you aren’t in the ‘taking advantage’ frame of mind, a connection to only the left output will deliver good, old-fashioned mono.

The Peak’s back panel features headphone and stereo outputs, CV Mod In and two pedal inputs, as well as MIDI In, Out and Thru sockets, and a USB port.

There are four banks of patches (A-D), each with the expected 128 entries. Since at this stage there were only 64 examples, I quickly whizzed through to get a taste. Those that leapt out included swooshily mellow strings, numerous gradually shifting pads and filter sweeps, bright, clear bells, humongous basses and several top-notch acid squelches and squeals.

Patches may be drawn from 14 sensibly named categories, assuming you agree with me that Bass, Pad, Lead, SFX, String and the like are generally more friendly than grouping by genre or similar. I’ve been a fan of Novation’s simple but effective category search facility since the Supernova synth, and although you can’t define your own names, there are two User categories to take care of types Novation didn’t think of.

Via a quartet of Patch buttons you can painlessly save, audition, compare an edit to an original patch and even start from a set of initialised values. The only omission was a ‘manual’ setting to make the current panel values live, a feature Novation assure me is planned at some point. One issue to be aware of is that the patch selection encoder and buttons are active in all modes, so if you happen to touch any of them during a lengthy editing session, hey presto, your work is gone! I typically lost stuff when adding entries to the modulation matrix, realising later that I’d been automatically trying to replicate my Waldorf Blofeld’s nippy way of navigating the matrix (by spinning the encoder at the left of the screen). That’s one muscle memory I had to unlearn! Novation are considering ways to prevent such losses in a future firmware update.

All the controls send either MIDI CCs or NRPNs and the resolution varies quite widely. For example, you get 255 discrete values of filter cutoff but only 63 of positive filter envelope depth (since it is bipolar). In general, envelope modulation is allocated half the resolution of LFO modulation, which seems an odd decision. Fortunately, apart from a few noises heard when adjusting effect depths, zipper noise is almost entirely absent. Finally, to prevent potentially disruptive leaps as you begin to tweak a freshly loaded patch, the system settings menu features a ‘pickup’ mode with the display showing both the current and saved values.

Starting our ascent with the Peak’s oscillators is an exhilarating if lengthy climb. Named in honour of Oxford Synthesizer Company founder (and Novation guru) Chris Huggett, the oscillators are digital NCOs (Numerically Controlled Oscillators) generated by an FPGA (Field Programmable Gate Array) clocked at 24MHz. All we musician types really need to know is that the high clock speed is responsible for the pure and accurate waveforms that don’t suffer from the usual levels of aliasing — although some artifacts are discernible at the extremes of transposition. Inevitably, some people are going to bemoan the lack of dirt, especially those raised on early digital synths where aliasing was a significant part of the character.

Novation report that on an oscilloscope, it’s hard to tell the NCOs apart from the DCOs of their Bass Station II. Certainly, and unlike many digital oscillators, there was no need to stack them all up to fatten out the sound. If anything, all three together were usually too full-on. Bear in mind you also have a ring modulator to call upon (sourced from osc 1 and 2) and a white-noise generator that can be low-pass filtered using an option in the Osc menu.

The oscillators all have the same controls, which consist of range selector buttons, coarse and fine tuning and a set of waveforms that appear, at first glance, to match those of a well-stocked analogue synth. The ‘more’ option is a hint that extra waves are to be found somewhere, but to find out what they are, you’ll need to enter the first of the menus: Osc.

Leading the Osc menu are a couple of Oscillator Common pages, where intriguing options such as Divergence and Drift are located. Their purpose is to shave off some of that perfection and stability, introducing exactly the kind of unplanned pitch drift we once hoped to avoid. Divergence adds offsets to each of the eight voices, pushing them slightly out of tune with each other. To explore this further, it’s worth going straight to another menu — Voice — and trying out a few of the play modes. Amongst the regular poly and mono assignments is one not often seen — Mono2 — where each note played is on a new voice. Cycling through them is ideal for highlighting voice differences and helping you to grasp that, although the oscillators are not vintage analogue, they can be given convincingly wayward characteristics.

Continuing to progress through the Osc menu, you encounter Keysync, which will optionally reset the phase as each note is triggered. This is particularly handy when you require an exact, unchanging waveform playback, eg. when synthesizing a kick drum. Beyond that point you’re into the meat of the oscillators and finally the revelation that the ‘more’ wave amounts to a choice of wavetables (about which more anon). In this menu you also determine the per-oscillator amount of pitch-bend and whether you’d like to remove any oscillator from regular keyboard tracking and give it a fixed pitch instead. The available range for this is C2 to D#5, so it’s fun, if a little limiting. A ‘Low’ or ‘Wide’ option would have been cooler still.

The oscillator’s next page holds several valuable options — first up is Vsync. Every oscillator features built-in sync courtesy of a hidden virtual oscillator. Vsync represents a pitch offset for the slaved oscillator and, as it increases, a splurge of extra tonality is generated. While not so rip-roaring as a Moog Prodigy or ARP Odyssey, it’s useful nevertheless. Better still, Vsync can be added to any waveform, applying the kind of bright, splashy harmonics that are oscillator sync’s trademark. However, even with Vsync active, the pitch knobs on the panel remain firmly locked to the master rather than the slave pitch. Thus, to generate the familiar envelope-driven sync, you must enter the modulation matrix and patch it up manually. This seemed to be an opportunity missed, given there are perfectly good controls sitting around not doing very much (unless you’re an advocate of pitch-swept oscillators, I guess).

Two parameters on the same page relate specifically to the sawtooth wave. SawDense represents the density of a generated extra sawtooth and DenseDet is its detune amount. It transpires that this is a variation on the theme of ‘supersaw’, famous for its fuzzy, creamy pads and an endless succession of euphoric euro dance patches. Toss this waveform through a resonant band-pass filter, add a splash of reverb and you’re in glow-stick heaven!

All waveforms are subject to Shape modulation, with three hard-wired sources and bipolar amounts for each. The results of shape-changing are unique to each wave but, briefly, the sine wave adds distortion-type harmonics while triangle morphs into square in one direction or wavefolds in the other. Sawtooth shape modulation applies a phase shift to the second sawtooth and, unsurprisingly, you get PWM from the square wave. If ‘more’ is selected, Shape provides a means of scanning through the individual waves in a wavetable.

These wavetables should not be confused with the more complex tables found in Waldorf or PPG synths. Novation’s have far fewer waveforms with gentle transitions in between. In total, there are 17 tables, each containing a mere five waves. Initially, this felt pretty underwhelming (after all, the Ultranova has twice as many), but if you’re a ‘glass half full’ sort of person, you’ll come to see the movement and variety as welcome partners for the analogue waves. Amongst the wavetables are bells, organs, electric piano, a pair of vocal formant types, a didgeridoo, solo string and several that are vaguely nasal and Clavi-like. Shifting vowels or didge impressions are sure-fire ways to impress your friends, but perhaps the most unusual tables are those containing octave shifts and chords — they are superb for lending shimmering textures to any patch. Or, if you’re still searching for more edge, the tables ‘Random’, ‘Zing’ and ‘Wobbler’ are all ideal starting points for analogue filtering.