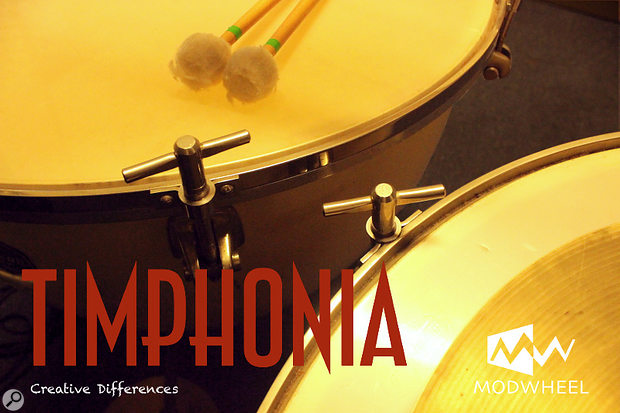 Compared to some of their more unusual instruments, like Biscuit Tin Guitar and Strained Wire + Garotte, for example, Modwheel’s Timphonia is fairly conventional and focuses on the kind of timpani instruments that are typically used by classical orchestras. Nevertheless, the library does include some quite experimental patches, created by playing the source instruments with bizarre objects and applying multiple effects processors.

The 3.5GB library (squashed down from 7.1GB using a new lossless compression codec) is divided into Regular, Irregular and Shaped Noise folders, each of which contains a list of Kontakt interfaces that differ from one another according to their purpose.

In the Regular folder there are interfaces for hits, ruffs, rolls and flams, played using mallets and sticks. Most of these interfaces offer five velocity layers and up to eight round-robin variations, which means that repeatedly hitting a key on a controller keyboard still sounds like a proper drum performance.

The front panel is very simple and offers dials for increasing the body or presence of the sound, reverb level and for balancing room and close mic recordings with one another. In practice, the three controls provide the user with everything from a dry and intimate sound, to one that’s more like a grand concert space. If these tools prove to be insufficient, however, a three-band EQ and simple ASR envelope can be tweaked on the next tab page. One of the Regular interfaces also includes an arpeggiator, which is always a useful tool to have when trying to quickly build something with a repetitive motif.

The Irregular folder’s content is certainly a little less conventional, as the interface name Broomstick-Coin-Ball suggests, but the irregularity is mostly provided through the use of alternative playing tools and techniques rather than extreme processing. By and large, these interfaces offer the same simple-but-effective controls as the Regular ones, the only difference being that most also include an echo processor.

For those times when a project requires something a little more ethereal, unearthly, disconcerting or discordant, there is the Shaped Noise folder, containing interfaces with names such as FangingCoins-kg, SlurPadedUp-kg and ATMOS GatesOfLilliput-kg.

In terms of sound manipulation, the tools on offer are similar to those given to the Regular and Irregular interfaces (the arpeggiator crops up wherever ARP appears in the name and the echo processor is used frequently), but the basic patches are already heavily processed. Many of the interfaces in this section could be useful for sci-fi or fantasy score work, and quite a few are so affected that they no longer display any percussive heritage.

Having reviewed a number of Modwheel products in the past, I’ve now come to expect high-quality sampling, simple interfaces and a certain degree of eccentricity and originality. Timphonia has all of those qualities. It’s a little more expensive than some of its Modwheel stable mates, but could easily provide a creative composer with the basis for an entire film score. It has certainly made me re-evaluate the potential of timpani in score work.