If I try to think of examples of a zither being used prominently in a famous piece of music, other than in the theme for the film The Third Man, few immediately spring to mind, which suggests that either I am unaware of its common usage, or it isn't an instrument that finds its way into commercial recordings. Given that zithers are notoriously difficult to play to a high standard, I suspect the latter is most likely. 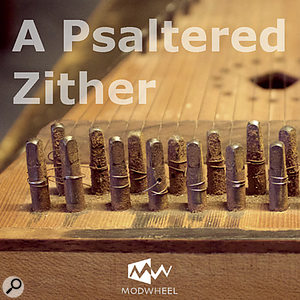 Modwheel's A Psaltered Zither should make it much easier for musicians to include zither playing in their compositions, although, as I'll explain later, its effect processing options and multi-articulation selection facilities make it more of a sound‑design tool than a virtual recreation of an instrument. In fact a total of six zither-like instruments were sampled by Modwheel, some of which its product notes describe as "unfretted folk instruments", so what we're dealing with here is a hybrid. What's more, by retuning the strings at the far ends of the scale, the note ranges of the zithers have been extended to cover six octaves.

For this release, Modwheel have created 10 Kontakt interfaces, so it is up to the user to find one that best suits their project. Most share almost the same set of controls and processors, but there are subtle differences from one to another.

The majority of the interfaces offer either six or seven articulations which can be turned on and off independently and have their own pan, attack, release and transpose controls. The articulations themselves are things like release noise, harmonic resonance, plucking, picking and long and short bowing. Variants such as chopsticks rattle appear on some interfaces, and there is even one interface that's dedicated to percussive noises.

Common to all, however, is a convolution reverb called Scatter Box, the exact workings of which Modwheel wish to keep a secret. The presets that can be found in its Non Sync folder are the most straightforward, even though quite a few feature pitch-shifted notes. The Sync presets (which slave to the host DAW's tempo) are more abundant, and these include all manner of rotary, delay and distortion processes. A selection of very useable reverse reverbs are included in the third folder, but most of these are fairly short and unobtrusive. It is in the final folder, called Atmos, that denser and longer‑lasting atmospheric reverbs are found, which are obviously indented for soundscape creation jobs. Modwheel don't offer any means of adjusting the presets, other than a level dial, but as there are plenty of options across the four menus to choose from, this isn't really an issue.

Standard across all the interfaces is a 32-step arpeggiator, offering control over rate, duration, swing, note order and pitch shift. There are also eight effects that can be applied individually, or all at once. These include an amp simulator, rotary speaker, low-pass filter, phaser, chorus, tremolo, reverb and delay. All of the effects are so simple to use that they only offer two control options, apart from the delay, which has a tempo‑sync function and delay time setting, as well as level and feedback controls.

As for the sounds themselves, obviously they all possess the characteristic twang of a zither (a sound that sits somewhere between a harpsichord, harp and lute), but there is a fair amount of variation in the source instruments and the way that Modwheel have bowed, plucked and struck them.

For example, the interface called Zithereens sounds very much like a hammered dulcimer and is reminiscent of the Hungarian cimbalom sound used by John Barry for the theme to The Ipcress File. In contrast, African Lute has a coarser texture, and a wonderful resonance that seems to work with any effect that's applied.

Whichever interface is selected, its initial sound can be modified quite considerably by changing the articulations and their levels. Favouring articulations like Pluck, Pick, Chop, Chop Rattle and Rlse (release) Noise gives sounds more of an urgent, percussive feel. Reducing those articulations and shifting the balance in favour of Bow Long, Bow Med (medium) and Bow Sus (sustain) softens the sounds. Further extremes can be achieved by tampering with the attack and release of each articulation.

A component that all of Modwheel's products seem to have is an interface that offers percussive sounds that were created by striking the source instrument in various ways. In this case, there is Psaltery Hits, which only provides two articulations, but includes quite a variety of nicely recorded pops, clicks and string scrapes. It's easy to imagine how these could be used in a film soundtrack, in much the same way that Jerry Goldsmith used noises alongside notes in his 1968 Planet Of The Apes score. In fact the hits are so cleverly created that one only needs to turn on the arpeggiator and mess around with the levels of its step graph to get a very compelling groove going.

Modwheel are also rather good at creating bizarre sounds, and there are plenty of those within this instrument. Can Bau Percussives is where the more extreme are found, many of which sound like they were made by bending and detuning strings while they resonated.

Having so much control over a range of articulations, as well as plenty of useful effects and processors to call upon, extends A Psaltered Zither's scope beyond the limitations of the six individual instruments it is derived from. The source sounds are particularly attractive, and with careful application of effects like the rotary speaker, delay, tremolo, reverb and the enigmatic Scatter Box, some seriously psychedelic noises can be made. For me this is Modwheel's most complete product so far. It continues the company's tradition of producing unusual instruments that are simple to use and affordable, but manages to be mature and extensive at the same time.

Composers who want something a little different from the familiar tones of classical and steel‑string guitar, or typical orchestral stringed instruments, should definitely check it out.