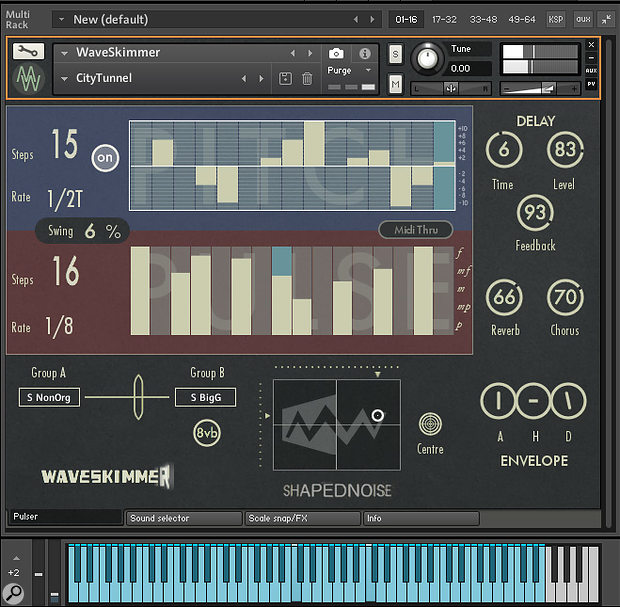 Modwheel is the virtual instrument development arm of New Zealand-based composing team David Donaldson and Steve Roche, a duo who have worked on a number of Peter Jackson’s movies. Waveskimmer (developed in collaboration with Kirke Godfrey of ShapedNoise) is my first encounter with the Modwheel brand, but they have a growing catalogue of sample-based virtual instruments. The tagline describes the instrument as a ‘pulse machine’; that’s undoubtedly appropriate but perhaps also undersells just what Waveskimmer can do.

The library is modestly priced, built from a compact 250MB sample collection and requires the full version of Kontakt (5.6 or higher) to run. The samples themselves include vocals, percussion, synths, metal sounds and string-based instruments but, in each case, the sounds captured feature dynamic tonal changes throughout their duration (generally bright attacks and less bright sustain and decay portions). This is one of the key elements in the library construction as various aspects of the front-end — including the use made of your MIDI keyboard’s modwheel — are designed to exploit this. In essence, the modwheel changes the start point of sample playback; open it up and you get gradually brighter sounds. There is obviously more going on under the hood than this but it really does make it very easy for the user to add real-time expressive dynamics to the rhythms created. Sounds themselves can be constructed by combining any two of the underlying samples via a simple browser page.

That front-end has plenty more to offer, though, including step-based pattern sequencers for pitch and velocity. However, you can set both the step length (between 1 and 32 steps) and rate independently for each lane. This makes it possible to create some really interesting evolving patterns where things only repeat exactly over pretty long playback cycles. The pitch lane can also be scale-snapped with key and scale options (or you can define your own scale) and a swing setting is provided. Also included are options for changing the amplitude envelope of the samples, an X-Y pad that offers addition control over transients, delay, reverb, basic EQ and chorus effects and distortion with different characters for the two underlying samples.

But what does it all sound like I hear you ask? Well, very good indeed actually. There are, of course, lots of ‘rhythmic’ VSTs aimed at media composers, but I think Waveskimmer is actually one of the most accessible tools I’ve used for this kind of task. The samples themselves are not perhaps of the bombastic variety (this will not replace your orchestral drums library, for example) but there is plenty of choice to be had. And, as demonstrated by the excellent collection of Snapshot presets included, Waveskimmer can do rhythmic/melodic just as easily as it does purely rhythmic.

A slightly niche instrument perhaps, but for what it does, Waveskimmer manages the neat trick of being hugely impressive without being hugely priced.