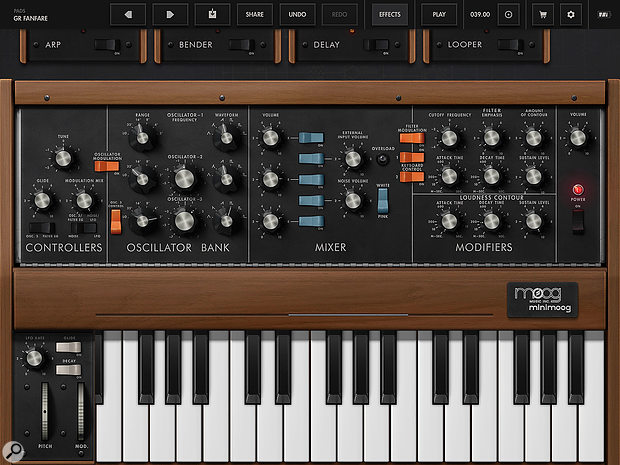 Gone are the days when it was acceptable to release a soft synth that sounded vaguely like a half‑remembered recollection of a vintage synth you once heard. They now tend to be damn good, and they’re getting better all the time. So how do you make a new one stand out from the crowd? Emulating one of the classics as accurately as possible is one way. Being the original manufacturer recreating that classic is another. But how about being the original manufacturer and recreating a synth that is itself a recreation of the most classic synth of them all? That should do it.

The Model D app is based upon the 2016 Minimoog Model D — the one with the dedicated LFO and additional modulation routings — rather than the original Minimoog, so that’s the synth against which I compared it. It was immediately apparent that the emulation is indeed damn good, and that the oscillators and filter have the same character as the original, from initial tonality right down to the vital quirk that causes the filter resonance to diminish as you play down the keyboard. In fact, my tests suggested that the emulation of the resonance is closer to that of the original Minimoog than it is to that of the 2016 synth. Sure, there are differences. For example, the hardware can sound a tiny bit more open at the top end, but that’s possibly a consequence of using the D/A in the iPad to make an analogue/analogue comparison. More obvious are slightly different time constants for the dual‑mode ADS(D) contour generators (Classic emulates the Minimoog, while Clean generates a contour that’s closer to the theoretical ideal), so different knob positions are required to obtain the same results.

Other differences include the drive and distortion generated by the feedback loop, which is more civilised on the app, and the results of extreme frequency modulation. But, for the most part, these are differences that you find in an A/B test when you’re making an effort to push things to the extremes. Were I to play both instruments on stage or in the studio, I doubt that many could identify which I was using. Consequently, I’m not going to belabour the point any further. And, in anticipation of someone saying, ‘ah yes… but what about a real 1970s Minimoog?’ I carried out the same tests with this too, and returned to the old cliché that you could waste your whole life searching for two identical Minimoogs. With my 1970‑something Minimoog, my 2016 Model D and the 2018 Model D app and controller sitting next to each other, I simply felt that I was playing three Minimoogs. 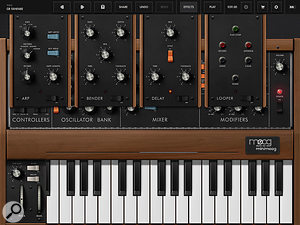 The Model D’s effects.Inevitably, Moog was never going to settle for a constrained recreation of the Model D, and have added four effects designed to look like miniature Moogerfoogers to the app. The first of these is a MIDI‑sync’able arpeggiator that offers four patterns (including random) spanning up to three octaves, with variable Gate length, latching and key hold. The second is modulated delay line that allows you to program various effects ranging from simple flanging and choruses to short slap‑back delays. Next comes a ping‑pong delay that can also be synchronised to MIDI Clock. Finally, there’s a looper that allows you to create loops and sound‑on‑sound recordings. It was when using the last of these that I encountered my only operational problems with the app; I felt that the metronome was too loud, overdubbing could create glitches, and the app’s master volume control is disconnected from the looped signal path, meaning that it’s too easy to create overloads. I doubt that Moog released it with glitching errors, so perhaps I had reached my iPad’s limit at this point.

There are a number of less obvious differences between the hardware Model D and the app. Shortly after its release, the app gained velocity and aftertouch sensitivity, although it didn’t allow you to use aftertouch to affect the depth of vibrato or filter cutoff frequency modulation. I queried this with Moog’s engineers, who thought that these were good ideas and, within days, a new version appeared that routed aftertouch to the modulation wheel amount. Furthermore, you can record and replay aftertouch via MIDI on the app, which you can’t on the Model D itself.

Another hidden difference lies in the available key priorities. The original Minimoog offered just low‑note priority with single triggering, whereas the 2016 revision offered low, high and last note options with single‑ and multi‑triggering. Moog have chosen only the last of these priorities for the app, which is strictly last‑note priority, although it retains the single‑ and multi‑triggering modes. Last note priority feels a little odd on a Minimoog although it is, in general, my preferred option for a monosynth.

However, the biggest difference lies in the app’s optional four‑voice polyphony. For decades, people dreamed of playing a polyphonic Minimoog but, when soft synths made this possible, they found that the results could be too big and too demanding of attention to sound good in a mix. Moog have, to some extent, ameliorated this in the app by reducing the level and perceived presence when you switch to its polyphonic mode. The app can then sound great as a four‑voice polysynth if you rein in the sound to something that’s suitable when played in this fashion. 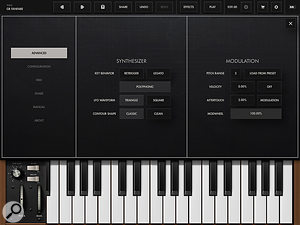 The Model D’s Advanced Configuration screen.Happily, selecting these options (and others) in the app is much simpler than using the key combinations of the Model D, and a set of simple menus allows you to determine things such as the LFO waveform, key behaviour, monophonic and polyphonic modes, velocity and aftertouch destinations and so on. On the other hand, there’s a lot crammed into the GUI and, because Moog chose to make this an accurate imitation of the hardware control panel rather than an approximation with larger knobs and switches, it can be a bit awkward to program. To help with this, there’s a fine adjustment mode for the knobs; touch the representation of the wooden case while turning the knob and everything becomes easier to control.

So what’s it like to play? Inevitably, playing an app is different from standing behind 20kg of iconic wood and metal, but the differences aren’t as great as you might imagine. Every control on the Model D app can be assigned a MIDI CC so, with a MIDI controller sporting an adequate selection of knobs and switches, you can control the app as you would the original. Add velocity and aftertouch, and take a moment to say ‘thank you’ to the engineers at Moog Music for the low latency, and you have a very decent performance synth. I accept that it won’t be everyone’s cup of tea, and there’s no doubt that i‑thingies can be fiddly for serious use but, if you program your sounds in advance (you can save and reload patches and banks of patches) and use controllers to control them (as you should) you’ll find that you have a very usable Minimoog. Hmm... very usable unless you want to do naughty things such as using a knob to sweep the filter cutoff frequency as part of live performance, at which point MIDI’s quantisation will result in zippering. But that’s a limitation of MIDI, not something specific to the Model D app.

There were only two other issues worthy of mention. Firstly, even in Classic contour mode, you can’t cause the filter to open further or the VCA gain to increase by playing rapidly. This is a shame because, subtle though the effect is, it adds a lot to the character of solos played on Minimoogs, so I hope that it’s added in a future revision. Secondly, there’s a bit of aliasing at the very top end, although this fell into the realm of things I had to hunt for, not a problem that occurred when I was actually playing the app.

In conclusion, this is a great emulation of the Minimoog Model D, and it’s amazing value. Sure, you can’t patch it into a modular analogue system, and it lacks an external signal input, but these are small prices to pay for all of the extras, especially since you’re saving 99.6 percent of the price of the original. So when are we going to see the Model D on our laptops and desktop computers? Not soon, I fear. Moog Music have been honest that, while they have significant expertise in creating iOS apps, they have limited resources to throw at a whole new development stream of AAX/VST/AU plug‑ins. In the meantime, I can only conclude by using an execrable phrase beloved of my American friends. At just £10$10, the Model D app is a ‘no brainer’.