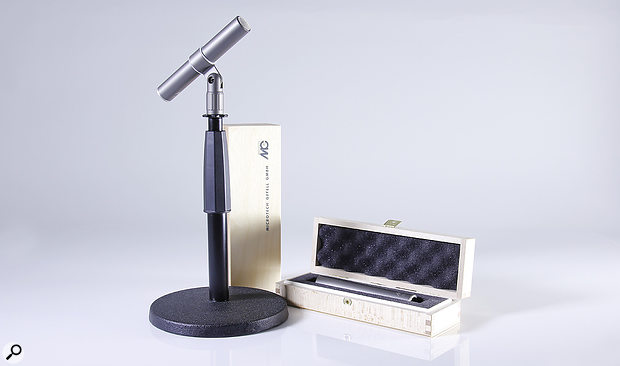 Twelve years since the original M300 was launched, illustrious mic makers Gefell have released an omni version — and it doesn’t disappoint!

The Microtech Gefell story is a fascinating one of triumph over adversity, of a company divided but surviving under state control and cold‑war politics, and now thriving again as an independent, privately owned company with an amazing heritage (see box for more detail). We’ve reviewed many of the company’s microphones in the pages of Sound On Sound over the years, but the subject here is an addition to the small‑diaphragm M300 range, which I reviewed back in April 2006. The original M300 cardioid model gained a hypercardioid sibling (the M310) quite quickly, but it’s taken more than a decade for Microtech Gefell to introduce an omnidirectional version to the family.

Given the unwavering popularity of spaced‑omni mic techniques, it was rather surprising that the only small‑diaphragm omnidirectional studio mic in Microtech Gefell’s portfolio was the very impressive and versatile M221 (reviewed in SOS June 2013). However, at roughly three times the price of the M300 range of mics, its appeal was inevitably somewhat limited. Thankfully, the new M320 omnidirectional microphone is priced to rival the likes of Neumann’s KM183 and DPA’s (more expensive) ST2006A — high‑quality but ‘affordable’ microphones.

Unlike its siblings in the M300 range the new M320 doesn't employ a ceramic capsule, but sticks instead with the more conventional milled brass type associated with Neumann’s microphones. However, it does feature another innovation (albeit one that’s also employed in several other Gefell mics) which is that the microphone’s internal power supply, which biases the capsule and energises the impedance converter circuitry, is optically isolated from the phantom power provided over the mic cable. In simple terms, the incoming phantom power is used to drive a high‑intensity LED, the light from which illuminates a photocell to power the mic. This ingenious arrangement completely decouples the mic from any noise on the phantom supply, and thus minimises the mic’s self‑noise.

For the review, I received two individual M320s with unrelated serial numbers, each in its own foam‑lined wooden case, but matched stereo pairs in a shared box are also available. Unusually, mic clips are not included as standard, but at least that means the user can specify their preferred type of clip without paying for something they won’t use. I was supplied with a pair of simple sleeve mounts (MH93.1), which fit easily and securely and include 5/8‑ to 3/8‑inch thread adaptors, but Gefell also offer an elastic suspension (EH93P) which uses a rubber ‘doughnut’ to isolate the mic from vibration. The Rycote InVision INV7 shockmount also works perfectly with the M320.

Measuring 130 x 31 mm and weighing 125g, the review mics have an attractive satin‑grey finish. The transformerless output is connected via an XLR with gold‑plated pins at the base of the body, drawing a modest 3.3mA from a standard 48V phantom supply, and the type and serial number markings are engraved into the ring around the XLR sleeve. The microphone’s sensitivity is a reasonable 16mV/Pa, with a DIN self‑noise figure of 14dBA and a maximum SPL rating of 144dB (for 0.5 percent THD). That implies a dynamic range capability of 130dB, which is very good.

In comparison to the Neumann KM183, which I mentioned earlier, the M320 is physically a little larger and heavier, and 1dB noisier, but it also has 4dB more headroom, 3dB more dynamic range, and its output is 2.5dB stronger.

As the M320 is equalised for a flat frequency response in the diffuse field, when used in the free field (ie. close and on‑axis to a sound source) the mic has a rising high‑frequency response that reaches a peak of +5dB at 8kHz, and its polar response narrows noticeably above about 5kHz. However, this is entirely to be expected and is very similar to the behaviour of the Neumann KM183, except that this model has a slightly stronger HF peak, reaching +8dB at a higher 10kHz.

The Microtech Gefell M320 is a very elegant and attractive mic. Slightly larger and chunkier than the KM183, although that’s not necessarily a bad thing in my view! Its tonality is intentionally neutral and accurate with a very smooth and extended bass response, combined with a smooth and quiet noise floor. I found the two review M320s worked wonderfully well in the role of a main spaced pair, for chamber music and on a choir, as well as for outriggers with an alternative (near) coincident stereo array.

When used as an accent or spot mic, pointing at and close to a source, the M320’s diffuse‑field equalisation inevitably imparts a bright and hyper‑detailed character, as would be expected. However, it’s not quite as pronounced an effect as that of the Neumann KM183. Of course, this added detail and brightness is often useful in providing extra definition and focus within a mix, but if it becomes distracting the rising response can be tamed simply by pointing the mic skywards, so that the direct sound arrives at 90 degrees to the capsule instead of directly on‑axis — a trick that works with all diffuse‑field omnis.

The M320 is a lovely, high‑quality, omnidirectional microphone, which competes directly with Neumann’s well‑established KM183 on price and performance. There are subtle differences in tonal character, but I’d be very happy to use the M320 in place of my much‑loved KM183s, and this new addition to Microtech Gefell’s M300 range will undoubtedly do very well.

The most directly comparable alternative is the Neumann KM183, although the more expensive DPA 2006A might also be considered.

The History Of Microtech Gefell

In 1943, to escape the Allied bombing of Berlin, Georg Neumann moved his R&D lab and skilled workforce to a village called Gefell, near Dresden, where he established a new Georg Neumann & Co factory. At the end of the War the Gefell area initially fell under American control, but was subsequently handed to the Soviet Union under the Potsdam Treaty. Nevertheless, after Neumann returned to Berlin in 1947 with some of his employees, initially to set up a small microphone servicing workshop, the factory in Gefell carried on building his microphones. Eventually, the Berlin facility became the Georg Neumann GmbH company headquarters, and a new factory was built as communications with the Gefell side of the company became increasingly difficult.

By 1956 the East German regime forced private companies like Neumann’s into a state co‑ownership arrangement, and in 1961 the construction of the Berlin Wall essentially severed all communications between the two halves of the Neumann company. The Gefell part of the business was renamed VEB Mikrofontechnik Gefell in 1972, and Neumann’s trademark was banned and replaced by an RFT logo.

From the 1960s on, nothing was known in the West of the Gefell company until the reunification of Germany in 1989, when the company changed its name to Microtech Gefell GmbH, and adopted the MG logo we know today. However, in those intervening decades it produced a wide range of high‑quality microphones, many maintaining and building on Neumann’s original concepts, while others introduced some very sophisticated technologies that simply didn’t exist in the West!

In 1993 the Gefell company was returned to the private ownership of the descendants of the original Neumann family. In contrast, the Berlin side of the business was acquired by Sennheiser Electronic GmbH, and production moved to a purpose‑built facility in Wedenmark, although the official Neumann headquarters are still in Berlin.

A very elegant and technically impressive omnidirectional pencil microphone which provides an attractive alternative to the ever-popular Neumann KM183.