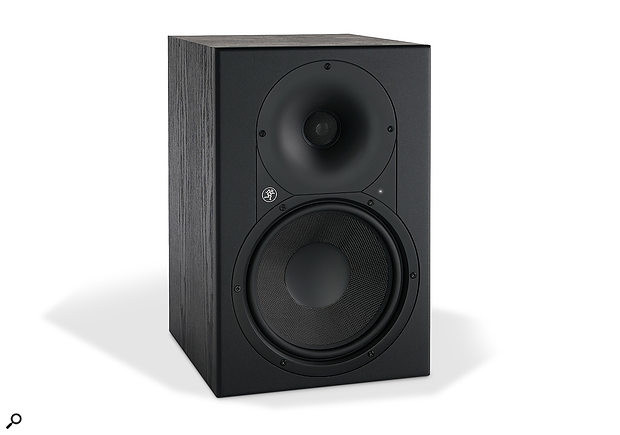 Mackie’s HR824 set a benchmark for project studio monitoring when it was first released two decades ago — and now the concept has been made even more accessible.

Twenty years have passed since Mackie first introduced the HR824. This 250 Watt, bi-amped active studio monitor featured a one-inch aluminium-domed tweeter, an 8.75-inch woofer, a set of switchable filters that assisted the user in optimising the speaker for both room acoustics and positioning, and a concealed, rear-mounted 6x12-inch passive radiator — an unusual feature that helped the speaker deliver a bass performance that went well beyond that of its contemporary competitors.

The HR824 found considerable success everywhere from home studios to professional facilities. In 2007, a decade after the introduction of the original, the HR824 Mk2 appeared, combining a somewhat more attractive price with several external and internal upgrades, the most notable of which were a new moulded-aluminium baffle with an integral high-frequency waveguide, and the change to a titanium diaphragm in the one-inch tweeter.

Fast-forward another 10 years to the present day and we come to the XR824: a more attractively priced extension of the 824 concept that, although cosmetically familiar on the outside, appears to have been completely re-engineered throughout.

If you own, or have ever owned, a pair of original Mackie HR824s, you’ll be excused a sense of déjà vu when you first set eyes on the black wood-grain finish of the XR824’s substantial, internally braced, MDF cabinet and the layout of its front-baffle driver surround. The XR824’s overall dimensions are identical to those of the HR824 Mk2, but since its amplification now sits internally, the cabinet has been deepened to occupy the space formerly taken up by the Mk2’s amplifier module.

In addition to its internal bracing, the cabinet is damped internally with adiabatic ‘foam fill’ acoustic matting, a material not new to Mackie. In an adiabatic process, heat is neither generated nor lost. Sound waves propagate by adiabatic compression and decompression, ie. heat is neither gained nor lost in the process. As I understand what’s happening (thermo-dynamicists look away now), adiabatic acoustic matting can cause sound waves to compress, which results in a loss of energy from the waves in the form of heat, reducing their ability to propagate further. Since heat is generated, this energy loss is non-adiabatic but, since the amount of heat created is minute, it is distributed throughout the acoustic matting without causing an increase in that material’s temperature — which means that the acoustic damping that results from this energy loss can be described as being an isothermal, adiabatic process.

Incidentally, and while we’re on the subject of foam, in a nice touch that I wish was more common, Mackie include custom foam rubber isolation pads with the XR824.

As with the majority of new monitors these days, the XR824 is powered by a pair of Class-D PWM amplifiers: 60W on the treble and 100W on the bass. Both bass and high-frequency drivers are new designs, the eight-inch bass driver featuring a Kevlar cone and the one-inch treble transducer, as in the original HR824, carrying an aluminium dome. The combination of new drivers and Class-D amplification produces a maximum SPL (per pair) of 115dB and a frequency response of 36Hz to 22kHz (+0dB/-3dB), specifications that are similar to those of the HR824 Mk2, whose 250W of Class-A/B power, 8.75-inch woofer and one-inch titanium tweeter delivered 120dB SPL per pair, and had a frequency response of 35Hz to 22kHz (+1.5dB/-3dB).

The XR824’s high-frequency driver sits in a ‘smart logarithmic’ waveguide (a soubriquet hitherto unknown to me) that is said to provide “acoustic alignment to deliver precision balance between articulate highs and mid-range clarity”. I enjoy marketing hyperbole as much as the next person, but this phraseology does travel a bit beyond the pale, even by my standards. From its physical appearance, it would seem to me that what is being described is a conventional exponential waveguide, similar to those fitted to the earlier HR824 models, that time-aligns the tweeter with the woofer. 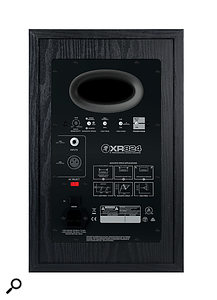 As on previous 824 models, the rear panel controls offer extensive frequency-response adjustment options.Down at the lower end of the frequency spectrum, the rear-mounted passive radiator that was a defining feature of both versions of the HR824 has been replaced by a rear-mounted bass-reflex port, which Mackie call the ELP (Extended Length Port) Bass Reflex System. This is based around a curved, injection-moulded internal tube that has been designed to produce zero turbulence throughout its length.

Having positioned the XR824, the first task is to set any necessary acoustic compensation. For half-space (near a wall) positioning, the XR824 introduces a cut of 2dB at 100Hz and for quarter-space (in a corner) this is increased to 4dB. In my case, the positioning was in whole space, so no compensation was required.

Should you need to, you can boost or cut high frequencies by 2dB with the switched 10kHz shelving filter. The onboard low-frequency adjustment is limited to a switch that rolls off the bass response, raising the -3dB point from 35Hz to 85Hz, allowing you potentially to use the XR824 with a sub (should you feel that there isn’t quite enough bass) or to simulate the response of a smaller loudspeaker when checking your mixes.

The XR824’s reproduction of low-end information is more than impressive. Mackie claim that the new bass driver’s Kevlar cone allows fast recovery from transients and, given the speed and definition in the bass and low mid-range that the XR824 exhibits, that claim seems to me to be well-founded. The new ELP Bass Reflex System (the extended-length port tube concept isn’t new, but Mackie’s implementation appears exemplary) not only helps the XR824 to deliver a tight, articulate and well-extended bass, but also should ease its integration into less-than-ideal acoustic environments. The XR824’s extended low-end capability certainly did my favourite deadmau5 and CoH tracks justice without overshadowing the mid-range and high end. The XR824’s mid-range has both precision and detail and I couldn’t discern any untoward artifacts around the 2.2kHz crossover point. The treble was similarly precise and detailed, with real clarity and an attractive smoothness that made it easy to listen to.

The stereo image was rock-solid, had a real sense of depth and placed vocals and instrumentation precisely in the soundfield. The dynamics and textures of vocals, percussion and acoustic instruments were reproduced with a very high degree of accuracy, as were those of electric guitars and basses, synthesizers and acoustic and electronic drums — although poor recordings and bad mixes had nowhere to hide.

My current favourite CD for testing the ability of a monitor to reproduce low-level detail is Spes by the all-female choir Cantus (featuring Frode Fjellheim), which was recorded in a church in Norway in DXD (352.8kHz/24-bit) and issued as a double-disc package containing a Hybrid SACD and a Pure Audio Blu-Ray DVD. There is a tremendous amount of low-level information across the entire frequency range in this recording and the XR824 revealed a seriously impressive amount of this detail — as well as dealing perfectly with Fjellheim’s electronic and acoustic keyboards and close-miked male vocal.

Mackie’s XR824 is an extremely impressive performer that delivers a deep, fast, tight and clearly delineated bass, a detailed mid-range and a precise, smooth treble. I’d characterise the XR824 as being perhaps more warm and revealing rather than coldly analytical, making it easy to work on over an extended period.

The inclusion of foam isolation pads is a nice touch, as is the 35/80 Hz bass roll-off switching that lets you emulate the sound of a more domestic loudspeaker system, although that function would have been more useful were it also to have been footswitchable.

For my money, the Mackie XR824 punches well above its price, but it is parachuting into an area of the market where there is some pretty tough, well-established competition to overcome. Should you be considering the purchase of a pair of monitors at around this price range, the Mackie XR824 is more than worthy of consideration.

As mentioned, the XR824 is entering a very competitive market sector, and you’ll find similarly priced — though perhaps not always similarly specified — alternatives, from the likes of Adam, Dynaudio, Eve Audio, Genelec, HEDD, KRK and PreSonus.

An impressive performer with a precise, revealing sonic signature and a sense of warmth that makes it untiring to work on. Its well-extended, well-defined bass response and the high level of detail in its mid-range and treble frequencies will provide significant competition in its price sector. Definitely one to lend an ear to.