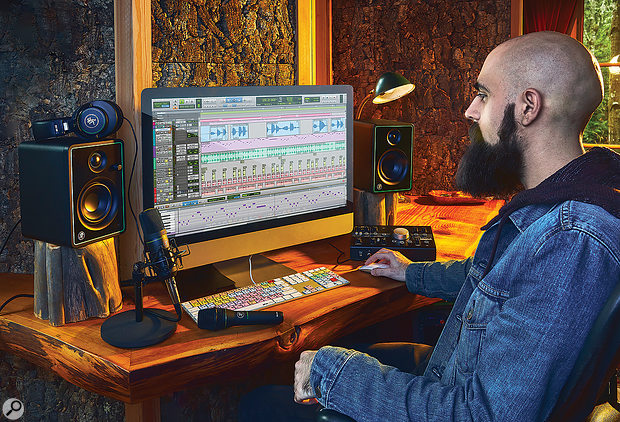 Mackie's first ever studio microphone proves to be an affordable all-rounder.

Mackie's Element series of microphones currently comprises three models: the EM‑89D dynamic stage model, the EM‑USB mic with USB‑C connectivity, and the EM‑91C large–diaphragm studio capacitor microphone, reviewed here. Designed with a tight cardioid pattern that falls somewhere between a standard cardioid and a hypercardioid pattern, the EM‑91C has a frequency response of 20Hz to 18kHz (-10dB at 20kHz) and the ability to handle sound levels up to 134dB SPL at 1kHz. Its equivalent noise level is 16dBA, which is not untypical for this style of microphone, and it has a nominal sensitivity of -30dB (0dB=1V/Pa at 1kHz).

In many respects it follows the pattern of many other affordable studio mics, but the shape of its frequency response graph is a little unusual, characterised as it is with some significant fluctuations above 1kHz, but no presence peak as such. By that I mean that none of the bumps and dips above 1kHz exceed the level of the mic's flat response portion; whereas some mics might have a presence lift at around 3.5kHz, this mic actually dips by around 4dB at that point. There's another trough at around 8kHz, so the signs are that this isn't going to be a brash-sounding, in-your-face microphone.

In terms of construction, the mic is built on what at first appears to be a standard chassis a hint over six inches in length, though closer examination reveals that the whole of the metal frame is cast as a single piece, incorporating the capsule support platform, PCB support rails and the threaded XLR housing. There also appears to be a foam sleeve inside the basket, so there's no way to get a view of the capsule and I could find no info relating to its size or construction. The circuit board is a little unusual too in that, other than two electrolytic capacitors, the circuitry is all surface-mount, and that includes the FET. This approach makes assembly very simple with the minimum of wiring, which helps to keep the price down, but may be less good news for those into doing mic mods.

The EM-91C turned out to be a capable all-rounder, while its lack of aggressive presence often worked in its favour.

The metal casing and basket are finished in satin black and the body sleeve is secured in the usual way via a separate threaded base. There are no pad or filter switches. A solidly designed elastic shockmount with a US mic-stand thread is included with the mic, as is a standard XLR cable (but there's no EU thread adaptor), and all this is presented in a foam-lined cardboard box. The best news, though, is the price: typically under £70 in the UK.

While you can't expect boutique quality from a mic at this price, in use the EM‑91C turned out to be a capable all-rounder, while its lack of aggressive presence often worked in its favour. Speech is rendered in a subjectively accurate, natural-sounding fashion, while acoustic guitar comes over as clean and confident without the stridency that some other budget mics impart. With the mic placed in front of an electric guitar amp, I found that the top end still needed taming a little, but I was able to get some very credible results with the minimum of effort. Placing the mic off-axis from the speaker also helped in pulling down the highs.

For vocals you'll always need to compare a few mics to see what works best for you, and in this price range I'd suggest you also look at the well-established Audio–Technica AT2020, the AKG P120 and the M–Audio Uber. There are also some very inexpensive models from Superlux, so it's down to finding which one pairs best with your voice rather than which one has the best paper specification.

Given its low price and included accessories, the Mackie EM‑91C makes an ideal entry-level mic that can be used on all kinds of voices and instruments. Even if you already have a decent vocal mic, the EM‑91C would still be a very useful second mic to have on hand.

An affordable yet surprisingly capable microphone, Mackie's EM‑91C also comes with a good range of accessories.