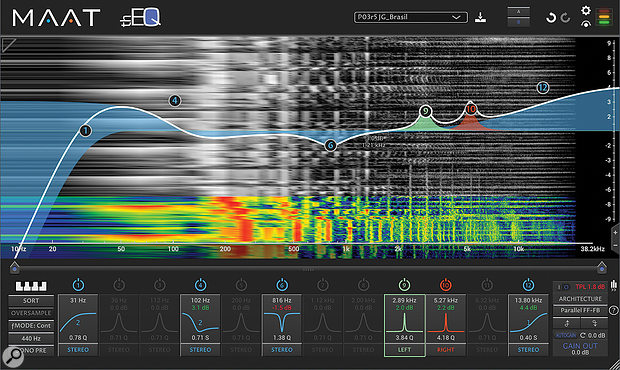 MAAT's mastering equaliser models the characteristics of 12 analogue EQ designs, but leaves out their real-world drawbacks!

Back in 2007 I reviewed Algorithmix's PEQ Blue EQ — www.soundonsound.com/reviews/algorithmix-peq-red-blue — and found it to be a great-sounding, very flexible minimum-phase EQ. It was eye-wateringly expensive, however, and Algorithmix seem to have faded from view; their website remains but hasn't been updated in years.

Thankfully, though, their Blue, Orange and Red equalisers have been taken on by MAAT and given a makeover, and while they could not be described as 'cheap', they are certainly more keenly priced than the Algorithmix versions. I don't know the precise connection between Algorithmix and MAAT, and can't be completely sure of the extent of the redevelopment which produced thEQblue (the manual is a tad coy about this) but correspondence with the development team tells me that they've done more than simply port the earlier Algorithmix code.

AAX (Pro Tools 10.3.10 and newer), AU, VST 2 and VST 3 plug‑in formats are supported, as are Mac OS (10.8 and later) and Windows (7 32- and 64-bit, and later), so most DAWs are catered for, and installation on my Windows 10/Sequoia 14 system was straightforward. There are a number of ways of activating the software; as Internet provision here on the Norfolk coast is best described as awful, I used the offline method of adding the licence to a Wibu USB dongle. Note, though, that the newest version of the software, which wasn't released at the time, no longer uses the Wibu. Instead, it allows for a cloud-based service which provides three licensing options. Online caters for users with modern Internet connections, temp offline would suit those with 'spotty' or non-super broadband, while full offline licensing is presumably designed for studios in the North Norfolk coastal area...

In essence, thEQblue12 is a digital EQ which models the characteristics of 12 different minimum-phase equaliser types, with 10 serial and two parallel 'architectures', and allows the different EQ models to be freely mixed in any instance of the plug‑in. If the cost is the main drawback for you, note that MAAT also offer thEQblue6, which has only the first six of the models — so neither of the Parallel models — for rather less. This version can be upgraded later to thEQblue12.

...thEQblue12 is a digital EQ which models the characteristics of 12 different minimum-phase equaliser types, with 10 serial and two parallel 'architectures'...

The basic complement of filters remains the same as in the original Algorithmix version, as does the basic design stance — that the character of an EQ is best represented (or determined) by how its 'bells' behave, in respect of the constancy or otherwise of the bandwidth as they are boosted or cut. In most EQs, this varies proportionally to the amount of boost or cutting, generally growing narrower as the gain change increases. But the varieties available in theEQblue include constant-Q models — in other words, bands that are the same width all the way up and down. MAAT are clear, though, that modelling does not mean emulating every foible of analogue gear. Specifically, they say that thEQblue has been designed to eliminate idiosyncratic 'errors' such as "Johnson noise, component variations, thermal effects and secondary effects like mains contamination and PSU current limitations". The manual is excellent, with a very good ratio of guff to solid information. That said, the differences between the various architectures seem to defy useful description — they really need to be heard to be understood.

In the original review, I complained that both the Red and Blue EQs were not attractive and, worse, that their design sparseness meant there was a serious lack of operational information. For example, neither could display the numeric value of the settings for more than one band at a time. In thEQblue, this has changed very dramatically for the better. Despite the manual saying that MAAT don't "do bling", my first impression was just that: the main screen presents a full-width, brightly coloured, vertically scrolling spectrogram display, and the various stereo-position options (Stereo or M‑S, which MAAT label Mono/Difference) are a mixture of purple, green, blue, red and yellow. But the whole display (colours, brightness and so forth) can be adjusted using controls hidden on the right-hand side of the GUI, and when I'd muted things to my taste, I quickly came to appreciate the usefulness of the new display.

The extent to which EQ decisions should be based on a graphic display remains a matter of dispute. Engineers brought up on analogue equipment that offers minimal visual information, or who adopt it as their main form of processing, tend to be wary of it or even negative. My own position is that although my mastering facility is largely analogue-based, I sometimes find a use for the visual feedback of the few plug‑ins that I do use. There's a strong caveat, though: first, it's plain daft to look closely at the screen before listening closely to the material; and second, it seems just as daft to look to the visuals to tell you where enhancement is needed. I use my ears, not a display, to tell me when something is lacking and needs a boost; but when I hear a low-mid muddiness that needs reduction, it can then be useful to look at the display to see more quickly exactly where that muddiness is. It might not be as theoretically pure as other techniques but it can save time, and that can be important.

Considering all of this, theEQblue is streets ahead of its previous incarnation: it is visually more usefully informative, but also more ergonomic in other ways. For example, the pendant which appears on the EQ point 'handle' can be used to solo and manipulate the parameters of the selected band, making fine-tuning of adjustments and broader focused exploratory sweeping very easy. Hardly unique, but good to have.

Although thEQblue has the same 12 basic models as the original, my sonic memory doesn't stretch back 13 years! So I began my new explorations in the same way I usually do. I found a ball-park setting for particular tasks, then moved through the 'architectures' to see what differences they made. My personal preferences don't seem to have changed much from my original testing, except that I now much preferred one of the parallel models (11) to the other (12), maybe because I wasn't tempted so often to compare it with an analogue equivalent (my trusty Knif Soma). The GML-like Type 11 is just a really good mastering/bus EQ, and the MAAT version here sounds much better than the incarnation in my TC Electronic System 6000. I also found that Model 9 (the "special topology" Constant-Q) was even better in the mastering situation than I remember when praising it last time.

...theEQblue is streets ahead of its previous incarnation: it is visually more usefully informative, but also more ergonomic in other ways.

During the testing, a couple of really nice mixes illustrated these preferences. An electronica tabla/gongs piece by Talvin Singh had complex, ringing layered textures, and the mastering aim was to to bring these textural details out a bit by reducing the masking resonances, but without affecting the overall presentation too much. In the end, I arrived at the result I wanted with only a combination of EQ and an extraordinary new digital compressor (the subject of an upcoming review!) — but this result was achieved quite quickly with thEQblue filter 9 after I'd spent a fair amount of time with my usual choice for this, DMG Equilibrium. The extreme flexibility of Equilibrium means that there were also contrary examples, of course, but this Model has become my new go-to tool when faced with otherwise recalcitrant EQ issues. On another complex piece, a Jemma Johnson song, I used the Model 9 for clarity and then the Model 11 for gentle upper-mid enhancement. In general, I only use digital for cutting and clarifying prior to the analogue chain and then switch to analogue EQ for character and colour; but in this instance there was no down side to using theEQblue for what were previously analogue-only duties — and I suspect that this kind of thing is exactly what the manufacturers intended.

In my mastering room setup, the unique sonic characteristics of thEQblue and the flexibility and sonic excellence of DMG Equilibrium complement each other very nicely. If forced to choose between them, Equilibrium's versatility would make it a better option overall. In fact, I found that with a considerable amount of experimentation and effort, Equilibrium can be made to very closely mimic the MAAT responses. But, as we're not forced too choose, why bother? Having had the MAAT in my mastering room for the past couple of months, I now find that when I know more or less exactly what I want, I choose whichever EQ will provide it — and then I'll dip into thEQblue if I want something more musical and perhaps exploratory. Until now, I have only ever had one digital EQ in my mastering room, and the fact that thEQblue has created a new space for itself says a lot.

A reworked version of the old Algorithmix PEQ Blue EQ, MAAT's thEQblue is a unique digital EQ that's well worth investigating — even if it doesn't come cheap!