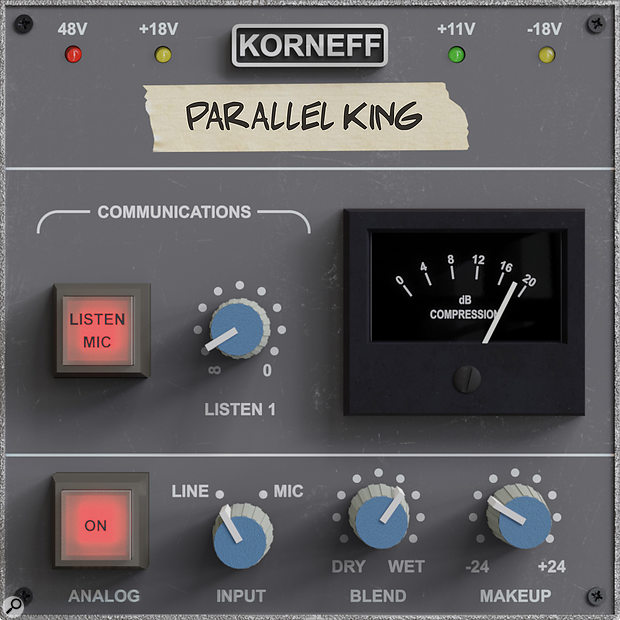 Dan Korneff is a producer/mix engineer with an impressive credits list who, reportedly, likes rebuilding and sometimes modding the analogue gear in his studio. His penchant for tweakery is reflected in Korneff Audio's two VST3, AU, AAX Mac/Windows plug‑ins: the Pawn Shop Comp and their new Talkback Limiter, which is reviewed here.

This plug‑in models the 'listen mic compressor' of SSL's analogue consoles. An aggressive-sounding limiter, this found fame as the tool behind the Phil Collins drum sound. You know. That Phil Collins drum sound. I won't dwell on that now, as its story has been detailed more times than I've had packed lunches. It has been modelled in software before, not least by SSL themselves, who released a free 32-bit plug‑in many years ago and now include a version in their Native Drumstrip, which is a great plug‑in that I use often.

Korneff's Talkback Limiter is different from SSL's plug‑in. It's more configurable and way more vibey. I had expected to fire it up, play with some drums and see how easily it can create 'that' effect (very easily, as it turns out), but I found myself drawn to it to add girth and attitude to a whole range of different sources. It's a thick, punchy, vibey processor that oozes analogue-like charm, and synth and bass guitar parts seemed to love it.

The GUI has two pages, but it's best to stick to the first until you have your head around how it all works. There's some gimmickry on show: at the top, for instance, virtual LEDs show the status of virtual power rails, and clicking on one 'breaks' the plug‑in, delivering a deliberately horrible distortion. Clicking again 'repairs' it, but it's all good fun and never gets in the way.

It's a thick, punchy, vibey processor that oozes analogue-like charm, and keyboards/synths and bass guitar parts seemed to love it. 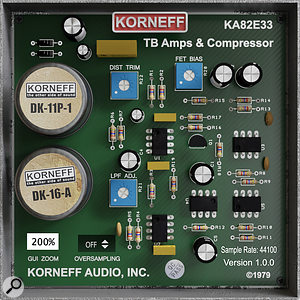 A second page — the virtual 'insides' of the virtual hardware — provides more options for tweakery.A strip of virtual masking tape displays the selected preset, and clicking it brings up more useful starting points. Beneath are the main compression controls: the Listen Mic button to (dis)engage it; Listen 1 (a threshold control); and a gain-reduction meter. The lower panel is where you dial in the vibe. An Analog button tweaks the frequency response and adds harmonic distortion to mimic analogue circuitry; there's no cheap 'hiss' trick or anything like that, and it sounds good to me. An input level selector chooses between Line (no boost) or Mic (30dB boost), and this makes a huge difference to the sound and to the behaviour of the compressor. Set to Line, the meter's needle typically dances around, while at Mic it's usually almost pinned to maximum. Having determined the character of the sound and compression, the dry/wet Blend and output level can be tweaked to taste. Though simple, the controls give access to a broad, pleasing sonic palette.

Clicking the Korneff logo at the top accesses the second page, which is designed to resemble the analogue compressor's inner workings, and here you'll find more controls: GUI scaling (options from 50 to 200 percent); oversampling (off, 2, 4, 8 and 16 x); a distortion trim pot; a variable low-pass filter; and a transistor Bias control which can exaggerate the action of the compressor. Other than the low-pass filter, GUI resizing and oversampling, I didn't feel the need to use these often, but I'm sure some will enjoy them. This is a unique and characterful plug‑in that I'll use a lot — and the price is right too.

A useful, characterful compressor, the Talkback Limiter is no one-trick pony.