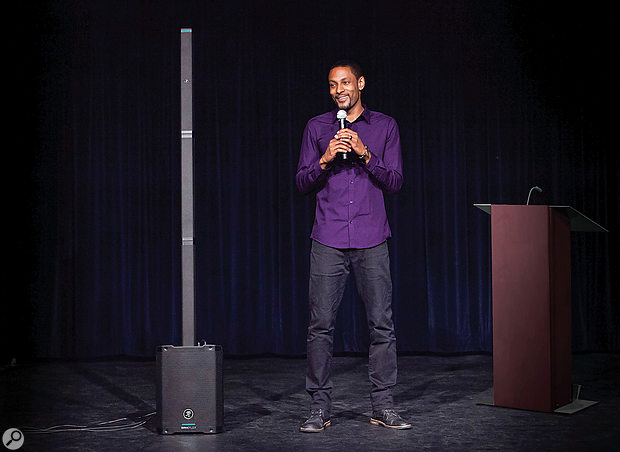 We put Mackie's portable and affordable column PA system to the test.

The mini line–array format certainly appears to be flavour of the decade for smaller gig applications, and now Mackie have joined the game with an extremely portable system of their own. We've covered the benefits of such systems more than once but the quick recap is that they are easy to set up, with no big speaker stands to create trip hazards, they tend to be kind to the vocals as the smaller drivers handle the crucial mid–range more cleanly than typical two-way boxes, and they have a wide, shallow dispersion that both puts the sound where you most need it and reduces the propensity for acoustic feedback. The downside is that unless you have two, the output is strictly mono.

Mackie designed the Flex for performers needing a lightweight, portable sound system capable of moderate sound levels combined with clarity of reproduction and wide dispersion. The foundation for the system is a 10–inch sub in a moulded, ported enclosure measuring just 432 x 330 x 361 mm, this supporting a three-piece column housing six two-inch, silk–domed drivers in the upper section. An integral top-mounted bar handle makes the sub very easy to handle and there's a green LED bar on the front of the sub enclosure (and mirrored by another at the top of the column) that can be set, via the app, to show power-on status. It can be turned off, or it can be made to light only when a signal is being passed through the mixer. Power comes in on the usual IEC connector, which is on the rear panel along with the power switch.

The lower two column sections are essentially spacers and conduits for the electrical connections between the sub and the top section, which is where the six mid/high speakers are housed. Powder-coated steel grilles protect the sub and column drivers, and included in the price is a padded cover for the sub and a three-compartment bag for the column sections. The column sections fit together very snuggly with connection via integral Molex connectors, and the bottom section seats into a fairly deep socket in the sub, so if somebody bumps into the column the whole system tilts rather than the column snapping off. With a system weight of 13.4kg, the sub is a very easy one-handed lift leaving you free to carry the column bag and maybe a guitar too in your other hand. Fully assembled, the system stands just over two metres tall, but either one or both spacers can be omitted if the system is set up on a stage or platform.

The Flex is bi-amped, with a 1000W (peak) Class–D amplifier driving the sub and a 300W Class–D amplifier driving the column, both powered from a switch-mode, universal voltage power supply. The crossover point is set fairly high at 600Hz, so the sub does most of the heavy lifting. All the usual amplifier and driver protection is built in, though deliberate abuse, such as running with the Limit LED permanently lit for long periods, is not recommended.

The Flex includes a built-in, six-channel digital mixer with EQ and reverb on the main channels, a choice of output voicings, and a wireless remote control option. Remote control is accessed using the free SRM-Flex Connect app running on a suitable iOS or Android mobile device, connected via Bluetooth. The app mirrors the physical mixer controls but also adds channel mute buttons and a settings page, as well as the ability to store snapshots. Music can also be streamed via Bluetooth — useful for those who use backing tracks or require interval music.

Given that the total surface area of six two–inch drivers isn't far off that of a single six–inch driver, you can't expect festival levels from this system, but it does claim a maximum peak SPL at one metre of 118dB (within a decibel of Yamaha's Stagepas 1K, reviewed last month), and a frequency response of 50Hz to 20kHz (-3dB). Such general specs don't tell you everything, but in practice the system turned out to be well-suited to solo artists, duos and presentations but is probably less viable for bands with drum kits. Mackie suggest the system is suitable for venue sizes up to around 100 people, which is probably fair.

Horizontal coverage is specified as 90 degrees, which is a bit less than many similar systems, and vertical coverage is quoted as 50 degrees — a little greater than some competing products, but that could be explained by the driver placement geometry: in the Flex, the lower three drivers are angled progressively further downwards, presumably to provide better coverage for those close to and slightly below the level of the upper column, and to better match the dispersion of the sub.

Recessed into the top of the sub is the six-channel mixer, which offers two mic/line inputs on 'combi' XLR/jacks and has physical rotary controls for high/low EQ, reverb and volume. These are all turn-and-press encoders, with the current value shown on the large horizontal display at the top of the mixer. Push and release three times to zero the current value, and push and hold for two seconds to see the peak input level. Channel volume, EQ, reverb and master volume settings all have this push-to-display feature. 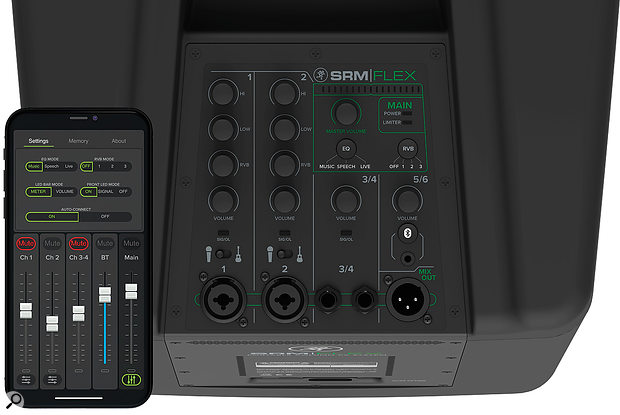 The base unit features a built-in mixer, which can be controlled from a smartphone or tablet via Bluetooth, and can accommodate two mono and two stereo inputs.

A stereo line input, with control over volume only, is fed via a pair of quarter–inch jacks on channels 3–4, and a further stereo channel (inputs 5–6) is equipped with a stereo mini–jack input and also has its own volume control. Alternatively, channel 5–6 can be used to bring Bluetooth audio into the mix, but it isn't possible to mix the two sources as the mini–jack always takes priority over the Bluetooth feed when connected. Any stereo sources are summed to mono, and there doesn't appear to be any provision to link two systems in stereo other than by using an external mixer.

There's a three-way master EQ switch with settings named Music (smile curve), Speech (LF roll-off plus a little presence lift) and Live (flat), and a choice of three preset reverb types offering shorter, medium or long reverb times. Reverb is adjustable separately for channels one and two but is not available on the other inputs. There are also mic/line/instrument switches for each of the mic/line channels that operate only on the jack part of the input socket — the XLR part is always set at mic sensitivity. A Mix Out XLR, sourced prior to the output EQ, is available to feed the mix to another active speaker or monitor. A limiter protects against overcooking things and there's basic metering on all but channels 5–6. There's no phantom power, but you can always plug in an external mixer if you need more facilities.

Setting up was luxuriously simple and the end result was definitely cleaner than we got from our usual two-way PA speakers.

The SRM–Flex displays all the hallmarks of a good mini line array, as it provides good vocal clarity as well as being kind to pre-recorded music. Despite the horizontal coverage being specified as a tighter-than-expected 90 degrees, I found that the subjective coverage still seemed usefully wide, so that if you stand to the side of the speaker, you can still hear plenty of clean level, which may help avoid the need for monitoring in smaller venues. Recorded music comes over as detailed and quite punchy while working with a mic allows for a decent amount of level before feedback becomes an issue. A slight tweak to the high and low EQ controls was usually enough to fine tune the system to the mic and vocalist being run through it. Intelligibility is excellent and the reverbs, while strictly preset-based, are more than adequate for taking the dryness off a vocal or instrument.

My practical tests included a club gig of around 100 capacity and two smaller pub venues, and in all cases the PA handled vocals, cajon and a little DI taken from both the acoustic and electric guitar amps, just to help spread the sound. Setting up was luxuriously simple and the end result was definitely cleaner than we got from our usual two-way PA speakers. The feedback threshold, high though it was, was reached before the system ran out of steam — though I don't think we had much leeway left before we hit the limiter.

The app works reliably and has a very clean layout that makes it easy to use from a touchscreen. This means of control is very convenient both for self operation, using a phone or tablet stand that you can reach during performance, or for a mix engineer within Bluetooth range. Whether or not this system is for you depends on several factors, but it you don't need numbing amounts of level and you're happy with mono, the SRM–Flex provides an easily portable, clean-sounding solution with the essential basic mixing facilities, including reverb, on board.

The list of alternatives seems to grow by the month, but if you want this degree of portability, then the choices include the smaller Bose and LD systems, the Yamaha Stagepas 1K and RCF's Evox 5. HK's Polar system doesn't have effects or remote control, but is a little beefier in both weight and output.

This is one of the most portable mini line–array systems I've tried, and while it may struggle to compete with a loud band with a full drum kit, it is certainly loud enough and clean-sounding enough for solo and small ensemble applications. The onboard mixer only offers two mic channels but you do get reverb and Bluetooth mixer control.