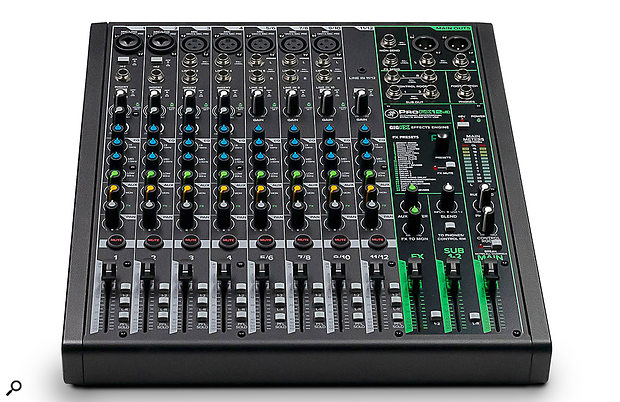 Now boasting Mackie's highly regarded Onyx preamps, the newest mixers in the ProFX range offer much to tempt musicians on a budget.

Mackie's ProFX range of compact mixers has been around for a while now, and in 2015 they got a 'v2' overhaul. Those models boasted Mackie's then–new Vita preamps and updated features such as the powerful Mackie Ready FX engine, and are still on sale. The new v3 model reviewed here appears to be a slightly sideways step from the v2, losing some features and gaining others. Like previous versions, the v3 models include a USB interface for two-channel recording and playback (24-bit, up to 192kHz sample rates), making them useful in the home studio or as a practical live mixer/submixer.

There are six different versions of the mixer available, distinguished by their channel counts (from six to 30 channels). The 12-channel version we have here features seven mic/line input channels, the first two of which are equipped with 'combi' jack/XLR sockets and Hi–Z switches to accommodate instruments with passive pickups. The first four channels each have an insert point and a one-knob compressor, while the last three channels (5-6, 7-8 and 9-10), can be used either as mono mic channels or stereo line channels. All the channels have a gain control, and all but channels 11–12 have a switchable 100Hz low-cut filter. Channel 11–12 can either be fed from a stereo mini jack or switched to the USB return, but it still has the full complement of channel EQ, send and pan controls. Note that the USB send is on USB channel 1-2 but the return is on 3-4, so you may have to change a setting in your DAW to accommodate this.

While this mixer has been relieved of some less essential features to reach its undeniably attractive price point, it still boasts all the essentials and is built in a tough steel chassis construction with sculpted ABS side panels. The circuitry has been designed to deliver low noise with decent headroom, and the preamps use the same Onyx design as Mackie's more expensive mixers. The v3 range has a frequency response flat to within a dB from 20Hz to 30kHz, and can handle levels of up to +22dBu, with +28dBu available at the output. The mic amp noise from input to insert send is quoted as -126dBu with residual noise at the outputs being below -95dB with the faders down. Crosstalk is also better than -90dB.

There are three fixed bands of channel EQ, comprising high- and low-shelving filters at 12kHz and 80Hz plus a fixed mid operating at 2.5kHz, all with a ±15dB range. Unlike the v2 models, there's no graphic EQ on the output and no master insert points, but it's trivial to place an EQ between the mixer outputs and your powered speakers or power amp if you need to. Each channel has a single monitor send that feeds a mono output jack (balanced or unbalanced), and that's followed by one effects send feeding the internal effects engine — though this also feeds a separate send jack if you prefer to use something else. Each channel has a large mute button and a medium-throw fader flanked by routing buttons (for the L-R or bus 1-2 outputs) and a PFL/solo button.

The master section has main outputs on both TRS jacks and balanced XLRs, plus additional outputs for Control Room and Sub. The latter simply carries the 1–2 bus outputs for feeding recording systems and suchlike, and it mirrors the USB feed. This has its own level fader placed between the main and effect level faders, with a routing button that sends it to the L-R mix if you need to use it for subgrouping. The effect fader also has a routing button to send it to outputs 1–2 if needed. There are no dedicated aux returns, so if you need one you'll have to hijack one of the stereo channels. There's a jack for an optional effects bypass footswitch, and a quarter–inch headphone output (that follows the main output unless a solo/PFL is activated)

The new DSP–powered Gig FX section has 34 preset effects, accessed by a 'turn to select, press to activate' encoder. Over half of these are useful echo or delay effects, with the rest made up of modulation, auto–wah and distortion. There's an effect mute button for those not using a footswitch, but no other effects adjustment other than level — it's strictly presets, the number shown via a couple of eight-segment displays. All the effect types are listed on the front panel.

Above the master faders are level controls for the Aux, Phones and Control Room outputs, an Input/USB Blend mix control for setting up latency-free source monitoring, and an FX To Monitors control. There's also a switch for sending the USB 3–4 plus inputs to the Phones and Control Room outs. When active, this mutes the main mix in the Control Room/Phones output. Levels are monitored by 12-segment LED meters that normally follow the output level but switch to solo or PFL when those functions are activated. A 'Rude' solo LED flashes to let you know one or more solo buttons are down. Phantom power is switched on just above the meters.

Power comes in on an IEC mains lead, so no nasty wall–warts, and the USB connector is also on the rear panel along with the power switch.

Mackie have done a great job of giving you the essentials for small live setups or basic studio recording without compromising on sound quality.

Return Of The Mackie

Operationally the mixer behaves predictably with no nasty surprises, though you do have to be careful when recording via USB not to route the USB return back into your mix output, as that causes a feedback loop. Otherwise, the USB side of things is straightforward, and as it's a class–compliant interface it requires no additional drivers. The manual shows the correct setup for recording, and also has a few examples of live setups, but if you've ever used a mixer before you'll have no problem using this one right out of the box. As we've come to expect from Mackie, the mic amps are clean and quiet, and while the EQ is only a three-band fixed–frequency affair, the shelving filters do exactly what they should, and the choice of mid frequency is a good compromise for vocal and instrument taming.

As for effects, you should find a reverb or delay somewhere in the selection to suit most live vocal applications, and if you don't need vocal effects, you can always deploy some of the more exotic treatments on guitar or keyboard. Most times you'll just need 'a bit of wet' on the vocals so one of the plates or rooms will probably fit the bill. While the effects are by no means exotic, they are more than good enough for use in a live sound setting and may also be useful in the studio. Similarly, the one-knob compressors on the first four channels bring in gradual and largely non-intrusive gain reduction.

Ultimately this is a budget mixer so you can't expect multiple monitor sends, parametric EQ or editable effects, but Mackie have done a great job of giving you the essentials for small live setups or basic studio recording without compromising on sound quality. Definitely worth a closer look.

Mackie aren't alone in making compact mixers with basic USB interfacing, and there are numerous alternatives from the likes of Alto, Samson, Behringer and Alesis.

Just as we were going to press, we learnt that Mackie are tempting potential customers by bundling a large collection of free software with each ProFXv3 mixer. The bundle includes Avid's Pro Tools First DAW, along with the Mackie Musician Collection of AAX plug-ins (including a wide range of delays, reverbs, EQ and dynamic-processing options). Also included in the bundle is Tracktion's Waveform OEM DAW, which also comes with a comprehensive suite of plug-ins.

A well thought-out, good sounding series of mixers at an affordable price.