With its built-in effects, compressors and graphic EQ, this compact console might just be ideal for small-scale live work. 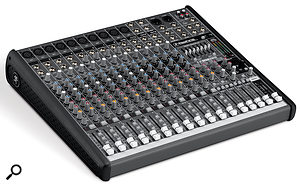 The Mackie Pro FX16 follows closely in the footsteps of earlier Mackie analogue mixers, though this particular incarnation has a few extra features, including a seven-band graphic equaliser, stereo USB recording and playback, built-in digital effects, and compression on four of the channels.

Constructionally, the mixer is typical Mackie, with a robust steel case and tough, moulded end-cheeks (although these may be removed for fitting an optional rackmounting kit). A switching, multi-voltage PSU is built-in, so no wall-wart is needed, and all the connections are on the top for easy access.

Although it's designated as a 16-input mixer, there are actually only 10 channels with mic preamps, the remaining channels being line only — something I always find frustrating when I run out of mic inputs at a gig. However, the stereo inputs are still useful for accommodating keyboards, guitar-modelling preamps and the like.

The way the input arrangement works on this model is that the last two mic-capable channels (9/10 and 11/12) may be used either as mono mic channels or as stereo line channels. There are two more line-only stereo channels at locations 13/14 and 15/16.

All the mic inputs have a switchable 100Hz, 18dB/octave low-cut filter, and the gain controls can provide up to 50dB of gain, with a further 10dB available 'in hand' via the channel fader. Although the manual doesn't say whether these preamps are based on earlier Mackie designs or not, they work well in practice, they sound clean, and they have adequate headroom and negligible noise.

The mono mic channels (1-8) have a three-band EQ with sweepable mid-range (these have a wide range, from 100Hz to 8kHz), while the remaining channels (from 9/10 to 15/16) have a fixed mid-range band, set at 2.5kHz. Of course, there's phantom power for capacitor mics or active DI boxes, and this is switchable globally. There's no EQ bypass, unfortunately, so you have to rely on the centre detents on the controls if you want to set the EQ flat.

Each channel has its own mute button, with an accompanying LED that shows both mute and input overload status. A further button below the bus routing switches activates the Solo/PFL function, with the usual Mackie flashing warning LED in the master section to indicate that one or more channels are solo'd.

The channel strips have access to three auxiliary sends, of which the first two are pre-fader and intended for monitoring, and the third is post-fader and designated for effects. By default, aux send 3 goes to the internal effects, but there is also a physical aux 3 output, should you wish to use external effects. Channels 1-4 additionally have a TRS jack insert point.

For connecting external audio devices, there are stereo tape in and out sockets on RCA phonos. The tape out is a duplicate of the main mix, and the tape input has its own level knob, which sets the level of tape return going to the main mix. A switch next to this chooses between the analogue tape return and a two-track return via USB (of which more in a moment). A button marked 'break' mutes all the input channels except for the stereo tape/USB return, for playing background music between performances.

In addition to the main output, which is presented on both XLR and jack sockets, there are four 'sub' buses, each with its own jack output. The channels can be routed to these buses using 'sub' buttons 1/2 and 3/4, making this mixer a practical proposition for studio recording when there are multiple sound sources to deal with. The buses can individually be routed to the left, right or both channels of the master bus, via buttons labelled 'L' and 'R'. The channels and buses are all controlled by 60mm faders, with the master bus using a single stereo fader.

As well as the two monitor aux sends, and the aux 3 effects output, a stereo aux return is available (either for use with external effects or as another stereo line input), and three knobs allow this to be sent to the main mix and the two monitor sends. All the auxes have their own master level control, and a separate rotary level control feeds a set of control-room outputs and the headphone out, which mirrors the control-room feed.

The on-board effects are courtesy of the built-in 32-bit effects processor. It's a simple preset system, but most of the 16 delays, choruses and reverbs are of the type you'd want to use — although you still get a Cathedral setting, which is probably only of use to Gregorian Chant cover outfits! I'd have appreciated a tap-tempo delay button, as it is often necessary to set delay time somewhere close to the song tempo. Mackie's choice of effects is practical, however, especially in a live situation, where having 99 presets, only three or four of which are actually usable, isn't much help.

A rotary control scrolls through the available digital effects, and separate controls regulate the amount of effect being added to the main mix, or the two monitor auxes. The effects can be disabled using a bypass button, or by means of an optional footswitch.

In addition to the onboard effects, four of the Pro FX16's mic/line channels (5-8) feature compressors, adjustable with a single 'more or less' control, not unlike those on some Yamaha mixers. These are basic soft-knee compressors, and they sound fairly benign in action as long as you are sensible with the amount you use.

The seven-band graphic EQ sits above the master section, and it can be applied either to the main mix output, or to the aux 1 output (for EQ'ing the stage monitor). A switch allows this to be bypassed if it's not needed.

The USB socket is there to let you make quick recordings of a stereo mix at gigs, which you can then import into the bundled version of Mackie's Traktion 3 Mac/PC software (or any other DAW of your choice) for editing and tweaking. You can record either the main mix or the group 1/2 mix, and you can also play back a USB source, either as an alternative to the tape return, as mentioned earlier, or via the stereo channel 15/16 (which has a button for selecting either the analogue or USB input).

The USB side of things is very simple: my Mac Pro recognised the mixer as a class-compliant device without the need to install any audio drivers. However, on my Lion OS MacBook Pro, I found I had to switch the mixer on after it was connected for it to be recognised.

I took the mixer out to one of my gigs and, other than the lack of a tap-tempo delay, found it did everything I required of it, with the reverb and delay effects sitting pretty well in the overall mix when used on vocals. The graphic equaliser is well suited to moulding the sound to different rooms, but it is far too coarse to be very useful in tackling feedback — you need 24 or more bands to do that.

Having low-cut filters on the mic inputs makes it easy to attenuate unwanted low end, and can also reduce the likelihood of vocal popping. The mid-range EQ sweep, meanwhile, actually goes low enough to be useful in addressing boom and boxiness problems. I also liked the very conventional layout, as anyone who's used a live mixer before should be able to find their way around the Pro FX16 without having to consult the manual.

The USB side of things is somewhat limited, as it is only capable of handling two channels, but it's still better to have it than not. The provision of the four buses plus two pre-fader sends allows for up to eight individual feeds (taking the master bus into account), making it useful as a recording mixer if used with an external interface. (If you want to record multiple parts without buying a separate audio interface, something like one of Mackie's Onyx Firewire mixers would be more appropriate.) On the whole, though, the Pro FX16 is very useful for live work, as long as you don't require more than 10 mic inputs. It's well built and sounds good, while the built-in effects, compressors, graphic EQ and USB interfacing all add to its value.

The closest alternatives that I've used myself are the Behringer 2442USB and the Soundcraft EFX12. You may also wish to check out the Allen & Heath range of live sound mixers.

Mackie's Pro FX16 is a practical choice for live mixing provided 10 mic inputs are enough for you. The effects are useful for adding a bit of ambience to the vocals, and you also get four compressors, the graphic EQ and stereo USB I/O. It isn't the cheapest mixer in its class, but I think the price is fair.