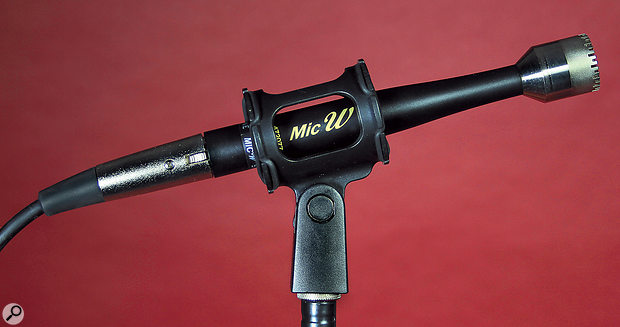 This Chinese mic bears a close resemblance to some premium European models. Does its sound live up to its looks?

MicW are part of the BSWA Technology group, which was founded in 1998 in Beijing, China, as a joint venture between the Chinese Academy of Sciences and a group of local sound engineers. In many ways mirroring the Brüel & Kjaer/DPA story, BSWA started out making measurement microphones, and then launched the MicW brand to develop the underlying technology for professional music‑recording and consumer applications.

The DPA similarities keep coming when you look more closely at the MicW designs, which are claimed to use unique methods of capsule design and manufacture. The mic diaphragms are titanium, nickel, or gold‑sputtered polymer composites, and the studio models employ stainless‑steel capsule housings and quartz insulating materials to ensure stability in humid and hot environments — just like the DPA designs. Capsules are 'aged' in an environmental chamber to ensure long‑term stability, before being individually calibrated according to the IEC 61049 standard. MicW seem to take quality control very seriously, and are an ISO 9001 certified company.

In addition to the company's original M‑series test-measurement microphones, the MicW product line-up currently includes the E‑series entry-level microphones, the i‑series microphones intended for plugging directly into iOS and other portable devices, and the N‑series and T‑series large‑diameter studio microphones. The 'N' indicates the use of nickel diaphragms, while the 'T' means titanium diaphragms.

The subject of this review is the N101 model, which is described as a large‑diaphragm, omnidirectional microphone. The capsule is actually a pre‑polarised (back‑electret) design, like many of the classic DPAs, with a stainless‑steel housing size of just under 24mm in diameter. However, the diaphragm itself is actually more like 19mm in diameter (so is really a medium‑sized diaphragm), and is made of nickel that is five microns thick. The grille design — indeed, the entire mic's aesthetic — is also remarkably similar to DPA's 4041SP large‑diaphragm microphone (a DC‑polarised design, in fact), although the MicW's matte‑black body is slimmer and not quite as long, at only 157mm. My personal opinion is that this kind of close imitation is technically unnecessary and commercially unhelpful, but it is common among Chinese products. The N101 mic requires standard 48V phantom power, and is not equipped with either a switchable pre‑attenuator or a high‑pass filter. The solid‑state impedance converter has a transformerless output stage.

The N101's frequency response is quoted as extending between 10Hz and 20kHz, although no amplitude tolerances are given and the calibration charts show the response to be about 10dB down at 20kHz, relative to the sensitivity at 1kHz. However, the on‑axis response appears to be substantially flat from 20Hz up to 1.5kHz, with a mildly (‑1dB) recessed mid-range between about 120Hz and 800Hz. Above that, a strong presence peak takes over, reaching +4dB between 3kHz and 4kHz, and then the response falls back to unity by 10kHz, before rolling off quite rapidly to about ‑10dB at 20kHz. The polar response plot suggests that at 16kHz the sensitivity is 10dB down for sources to the sides of the mic and nearly 20dB down for those directly behind. At 10kHz, the attenuation is more like 5dB and 10dB, respectively.

The N101's on‑axis sensitivity is given as 40mV/Pa on the Mic W web site, although the supplied user manual suggests 22mV/Pa. However, after comparing the N101 with my reference mics, I think the 40mV/Pa figure is the more accurate one. The mic can cope with 130dB SPL (for one percent THD), and the self‑noise figure is given as 18dBA. This seems a little disappointing for a large‑diaphragm capsule — for comparison, DPA's genuinely large‑diaphragm 4041SP manages just 8dBA. However, the N101, with a 19mm diaphragm, isn't really a large‑diaphragm mic at all, and if you take that into account, a much fairer comparison would be DPA's 4006A, which has a self‑noise of 15dBA. In other words, the MicW N101 performs in the same ballpark as comparable medium‑sized, self‑polarised microphones. 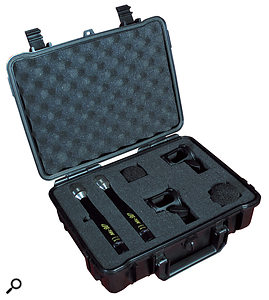 The N101s are available in a kit including matched pairs, as shown.

I was supplied with a stereo kit of N101s for this review, comprising a pair of N101 omni mics with sensitivities matched to within 0.5dB, a pair of simple tubular shockmounts with an arrangement of crossed elastic bands at each end to support the mic, and two open‑cell foam windshields — all housed in a tough plastic carry case fitted with a diced‑foam insert. The four‑page user manual was actually just two pages printed twice, and contained minimal information, but the supplied individual calibration charts for the two mics were quite helpful. The sensitivity and response matching appeared to be very close, with near perfect alignment on-axis at 1kHz, and only a very small response difference around 8 to 9kHz — nothing that would cause any stereo imaging problems.

I tested the mics both individually and as a stereo pair, the latter in typical spaced‑array and Schneider‑disc configurations. The Schneider disc is essentially the same as a Jecklin disc (an acoustic baffle between a spaced pair of microphones), but with an additional partial foam sphere to more closely replicate a human head.

When used on-axis, the N101 sounds a little bright and forward, but not to the extent of being 'edgy'. As a result, it has a very detailed and revealing character that works well on many sources in a mix situation. My initial tests involved hand‑holding the mic, during which I found it picked up far more handling noise from the mic body than I was expecting, so using the supplied shockmounts, or a third‑party alternative, is very highly recommended.

As the polar response charts hinted would be the case, there is quite a pronounced reduction in HF pickup when the source moves off axis. The N101 is, in practice, quite a directional omnidirectional microphone, at least as far as the high frequencies are concerned, although, to be fair, this is not particularly unusual in mics with physically large capsule housings such as the N101 has. In fact, some HF directionality can be a very useful feature in stereo array applications, but it is something that needs to be borne in mind when positioning the mic. The N101s bass extension proved to be deep and well extended, with a very natural and clean‑sounding character, and it was certainly sufficiently extended to warrant the use of the shockmounts to avoid unwanted subsonic vibrations.

I trialled the N101 on an acoustic guitar, a cello, and a variety of hand percussion, and compared the results against those obtained from a borrowed original B&K 4006 and a Sennheiser MKH20. The MKH20 sounded a little smoother but more extended at the high end, while the B&K 4006 was brighter (although not as bright as the N101) and seemed slightly more controlled — but the differences weren't that huge, and it was really about equalisation rather than differing levels of refinement or detail. In some situations, I'm quite certain that the brighter focus of the MicW could easily win out. In terms of the low end, transient response, dynamic range and noise floor, there really wasn't much to choose between the three mics either.

As a stereo array, the N101s worked very well, and here I think the HF directionality is actually a beneficial quality, since it introduces some level differentiation, as well as time of arrival differences between the signals from the two mics, and that translates into better definition of the stereo image. Arranged as a simple spaced pair in front of a grand piano, the N101s performed well, offering a clear, crisp and detailed sound with a good sense of spaciousness and scale, and a naturally proportioned bottom end. When they were mounted on the Schneider disc for a quick test recording in front of a school orchestra, I felt the HF directionality was less beneficial, and I ended up having to angle the mics outwards much further than I normally would with the MKH20s, to achieve a reasonably consistent tonal response across the full stereo sound stage.

Overall, the N101 is a very good microphone, and although it's not quite as smooth and controlled at the high end as the industry benchmarks, I felt it gave little away in terms of clarity or resolution, and managed a similar performance in terms of noise and maximum SPL figures. The distinct HF directionality exhibited by this mic may be perceived equally as both helpful and unhelpful, depending on the application. To sum up, the MicW N101 is a very competent performer and represents good value for money.

The DPA 4006A is the obvious alternative from a performance point of view, and the DPA 4041SP from a styling perspective, although both cost considerably more than the N101. Sennheiser's MKH20 and MKH8020 have a smoother and more extended HF response. Neumann's KM183 is a smaller high-quality omni, and the Rode NT55 with omnidirectional capsule is a more cost‑effective alternative.

This Chinese back‑electret studio microphone performs well and is a very strong contender that stands up to comparison with the industry benchmark. The very strong styling similarities leave you in no doubt as to which mic that is!