The latest Moogerfooger, offering chorus and flanging, is alluring but not cheap — so is the Cluster Flux worth the bucks? 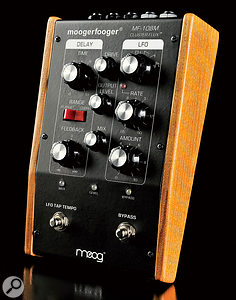 Moog's range of analogue Moogerfooger pedals continues to thrive, the latest arrival being the 'Cluster Flux', a name loosely derived from its functionality as a chorus and flanger pedal. Being from Moog, it's not just the name that's out of the ordinary, as evidenced by the many voltage-control inputs and expansive MIDI implementation.

The Cluster Flux is built around analogue delay lines — specifically Bucket Brigade Devices or BBDs. Interestingly, Moog chose two venerable Panasonic BBDs in preference to modern alternatives (based on their noise profiles, tone and headroom), despite neither having been in production for decades! It's therefore reasonable to assume that the asking price reflects the rarity of these components, or the effort it took to secure enough for a production run. Moog aficionados will no doubt remember that the earlier MF104Z Analog Delay contained an even rarer BBD, and is now discontinued.

No Moogerfooger would be accepted into the fold without being ruggedly made of metal and wood, with knobs that are perfectly weighted and switches that are solid. The Cluster Flux is just such a beast, and, at around 1.8kg, won't be easily kicked aside either. Earning extra friendliness points, a label on its underbelly supplies the reference information you'll typically need in a hurry, including the MIDI CC assignments and the voltage range of the CV inputs. Despite its guitar-pedal format, batteries are not an option, the crumb of comfort being that the supplied adaptor is small and neat.

As its suffix proclaims, the MF108M has a MIDI input. It also has as many quarter‑inch jacks as will fit on its pertly inviting behind. The majority of these are CV inputs for external control of the main panel functions, either by pedals (such as Moog's EP2) or by other voltage sources. Audio enters via a single input and departs through one or two outputs, with up to four different configurations for these selected via DIP switches on the main board. Moog have fitted some of the tiniest switches I've ever been challenged to prod and poke, and I wonder if it's a coincidence that, directly after describing how you open up and adjust them, the manual goes on to discuss warranty and service? With the switches at their default setting, the right-hand output carries the original signal plus the out-of-phase wet signal. This results in a chorus or flange that can be tastefully spread across the stereo image. Other combinations change the handling of the mix and also switch the phase of the wet or dry signal. The connectivity story doesn't end at the outputs. An 'FB insert' jack is on hand to enable external processing of the delay's feedback signal. This gives unusually precise control over its tone and character.

Even if you've never seen a Moog before, there shouldn't be anything unfamiliar here. A quick scan reveals three functional areas, relating to the delay, the signal levels and the LFO, with a rocker switch toggling between the pedal's two modes. Either negative or positive feedback is available and at high levels a signal is generated even with no input present. If you're fond of the sound of fingernails on blackboards, this will be right up your street! Now all that remains is to connect an instrument and adjust the Drive control for optimum level. With between ‑7dB and +28dB of attenuation, the Cluster Flux coped easily with every line-level signal I could muster.

Flanging and chorus are logical partner effects, as both feature LFO-modulated delay. Flanging requires a shorter delay time to generate its trademark metallic tones and jet-engine whooshes; here it's between 0.6 and 10ms. Chorus is more about discernible pitch changes, and therefore longer delays. A range of 5 to 50ms ensures that the Cluster Flux delivers smoothly at the lush and swirly end of the spectrum.

The manual includes a few starter patches, but it shouldn't be long before it's superfluous. Judicious tweaking, after all, is the key to Moogerfooger enlightenment, and I soon found the chorus to be addictive, while at the same time unobtrusive. When pushed, it slips into acidic regions of shimmering delay. In flanger mode, although the output is often more conventional, it still delivers the required swirls and boings.

If you have a foot free, a few presses of the tap-tempo switch neatly adjust the LFO rate. Personally, it was my hands that were never far from the controls, whether tweaking delay time or LFO rate, amount and waveform. Naturally, all the traditional LFO shapes are present, from sine to rising or falling sawtooth, the only omission I could spot being a smoothed sample and hold. The existing stepped random wave was ideal for sequenced effects, but its sudden transitions occasionally felt jarring. Fortunately, a partial workaround exists, assuming you don't mind a session of digital delving...

Thanks to a great MIDI spec, most of the panel's controls can be automated from a MIDI sequencer or DAW. Better still, more outlandish features can be slipped in, some of which you definitely don't want to overlook. Using only MIDI CCs, fundamental changes are at your command, the most significant being that the delay time can be increased by a factor of eight! To experience these mutated delays, send the appropriate CC and switch into chorus mode (where the delay times are longer). At its new maximum delay time, the Cluster Flux no longer delivers chorus as we know it, although you'll spot right away that there is a price to pay for the increase. The delay becomes dirty, creaky and aliased, with the BBD clock leaking through too. Given that you now have a freaky analogue delay to play with, the noise hike should be seen as adding character to what is otherwise a quiet and well‑behaved pedal, but if you prefer to tame this, you can connect an external equaliser or filter to the insert jack and some of the roughness can be smoothed away.

Earlier, I mentioned a way to render sample-and-hold modulation less edgy. This is achieved by another MIDI CC that slows the transitions between delay times. The resulting smoothing applies to manual delay tweaking or to any other method, including LFO modulation. Further MIDI applications include sync'ing the LFO to MIDI clock, its rate LED turning yellow to tell you this is happening. Delay times can also be 'played' by MIDI notes, a feat that's particularly effective on comb filter‑style flanging loaded with high feedback.

Finally, if all this MIDI talk leaves you cold, the five pedal inputs at the rear are eager to accept trusty old voltage, in the range of 0-5 Volts. Via pedals or other analogue sources, you can manipulate delay time and feedback, LFO rate and amount, or just the effects mix. I now need to confess that if you ignore the stated voltage requirements and send larger voltages, the Cluster Flux might spontaneously reboot. Thankfully, it doesn't appear to bear grudges.

In approaching these familiar effects from an analogue perspective, Moog reach parts that regular chorus or flanger pedals rarely do. The build quality is as we've come to expect, and even though the Cluster Flux is priced above many of its siblings, it has the personality to get away with it.

You shouldn't expect the kind of deep ensemble chorus available from digital units; the Cluster Flux's nuances require time to fully appreciate. Having spent that time, I found myself returning again and again to a gentle, swimming chorus for its warmth and transparency and to the flanger slightly less often. Some of the most interesting effects were obtained by combining the Cluster Flux with other Moogerfoogers, and especially by exploiting its MIDI control.

From the simple act of multiplying the delay times to make noisy, dubby delays or sync'ing the LFO to a drum machine to indulge in stepped flanging, MIDI was the key to the most memorable fluxing. Anyone looking for an unusually versatile flanger and chorus unit should, therefore, check it out. Moog's Cluster Flux doesn't quite reach infinity, but it sure goes 'beyond'.

There aren't too many analogue alternatives that spring to mind, other than a few choice guitar pedals, such as MXR's M234 Analog Chorus or the Hartman Electronics Analog Flanger (apparently a clone of the Electro Harmonix Electric Mistress). There are many, many digital flangers and choruses built into multi-effects processors, so I'll mention just the one I'm most impressed with — Eventide's Mod Factor. Also not a budget item, it offers highly controllable flanging and chorus, along with many other (digital) effects, a wonderful MIDI implementation, and even some voltage control thrown in.

Chorus and flanging Moog‑style, featuring analogue delay lines and plentiful voltage inputs to interface with other gear. The Cluster Flux should not be mistaken for a typical guitar pedal and, at the price, will probably attract more die‑hard Moog and analogue fans than general seekers of chorus.