Most processors in API's 500‑series format are classic studio tools such as preamps, EQs and compressors — but now a heavyweight champion from the synth world has joined the party. 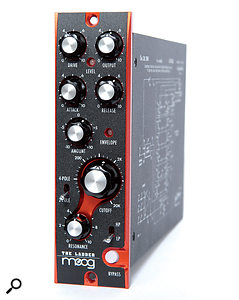 Much has been said and written about Moog synthesizers and their components, such as the filters, in the last few decades, and deservedly so, because Robert Moog created several instruments that set the benchmark for generations of engineers and synthesists to aspire to.

One of his classic designs is a much‑loved filter circuit, on which Moog filed a US patent in 1966, and which became one of the most important elements (if not the key element) in the Moog sound. The famous Minimoog Model D, the world's first compact and portable synthesizer, employed this filter, as did many of its successors. Almost 50 years later, Moog's invention remains one of the most musical‑sounding of filter designs, and it is loved by countless enthusiasts for the lush, thick, creamy tones it can generate. Interestingly, it gained its name 'ladder filter' from the schematic of the filter circuit, which is based upon two symmetrical cascades of four transistors, with a capacitor between each pair of transistors. As you can see from the photo, this does indeed look like a ladder. 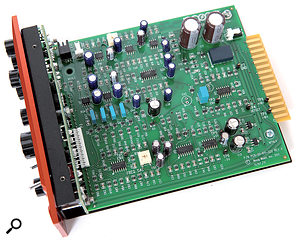 Clean PCB inside the module, populated mainly with SMD parts.

Modular components are nothing new in the world of synthesizers. In fact, this is how it all began in the '60s: synths could be huge devices consisting of numerous individual modules, all tied together with a spider's web of patch cords. Some of these impressive installations did not even have a keyboard, as synthesists took pride in creating patches which did not even have to be played in a traditional way.

Moog haven't produced such 'modules' in a long while. Rather, they're famous for classic self‑contained analogue synths such as the Minimoog. So with the Ladder, are Moog returning to this modular world? Well... no, not really, because this isn't a typical synth module at all, in that it's not intended to form part of a larger modular synth. It's a fact that seems to have stirred up a little confusion amongst synthesists who were expecting exactly that, but as you might expect from an API 500‑series 'Lunchbox' module, the Ladder is aimed first and foremost at studio engineers.

Given the format, the Ladder filter's connectivity is limited to simple, balanced audio inputs and outputs, which unfortunately means that there are no CV/gate connectors. Instead, though, this small, self‑contained module is filled with a number of features that modify the sonic behaviour of the filter.

Traditionally, Moog's transistor cascade ladder filter is a four‑pole design, with each pole responsible for a roll‑off of 6dB per octave, adding up to a total of 24dB per octave. This is a powerful design to begin with, and capable of very robust filtering, but many Moog filters can be constrained to operate as two‑pole filters, resulting in a more gentle 12dB-per-octave slope — an approach that's used in the Ladder, which can be toggled between the classic four‑pole and the softer two‑pole circuits. It can also operate as a high‑ or low‑pass filter, attenuating the frequencies below or above the cutoff point, respectively. The latter filter type is more commonly used, of course, but a high‑pass filter is good for creating a lot of interesting sounds as well. Incidentally, the venerable Minimoog did not offer either of these options: its filter always operates as a 4‑pole low‑pass, so you could argue that we're being spoiled here!

Before turning the actual filter knobs, the gain structure can be set with the Drive and Output pots. The former not only determines the input level (and thus the signal‑to‑noise ratio), but it can also change the sound of the filter module drastically: when cranked, it introduces a meaty overdrive, with lots of organic‑sounding, second‑order harmonic distortion, which is typical of triode‑tube and some discrete transistor circuits. Furthermore, this control modifies the sensitivity of the envelope follower, which has control elements for attack (250μs-2s) and release (150ms-2s) and a centre-detented 'Amount' pot, for both positive and negative cutoff modification. In addition, the Ladder provides visual feedback via a three‑colour input-level LED, another LED indicates the envelope signal strength and dynamics, and there's an illuminated bypass button. Last but not least, two Ladders can be stereo linked using a jumper wire. 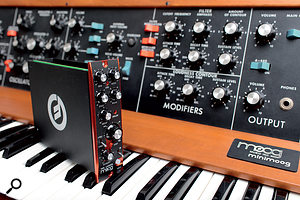 All controls are centred around the cutoff knob, which is considerably larger than the other ones, without actually being big. Without CV/gate connectivity, all the special features of the Ladder come in very handy, but I found that the knobs were almost too small for making fine adjustments — and this, arguably, is the only true Achilles' heel of this module. Being used to the huge knobs of my Minimoog, with ample space in between them, adjusting the Ladder feels completely different.

Luckily, though, the sound is not at all small, and the typical, classic Moog filter sound — with all those thick, lush, saturated sweeps — is there from the word 'go'. Sometimes, a Moog filter puts me in mind of a huge crocodile swimming just below the surface of the water: it might sway gently for a long time, but then suddenly it jumps out of the water, jaws open wide; and the Ladder is no exception. It provides great‑sounding results, even on a simple sweep with little or no resonance, but it also offers more than enough sonic variety for the most hardened of tweakers.

Even in direct comparison with my Minimoog Model D, the Ladder's qualities were evident. The two sound a little different (not a surprise, given that the circuits employ totally different parts), but the Ladder is clearly worthy of the Moog name. The sonic scope ranges from clear and glossy to a fully overdriven roar. However, the saturation curve is not entirely smooth: the Ladder breaks up nicely up to a certain point, after which a nasty, crackling distortion occurs. That's not to say that you can't take it to the extremes, but you do have to tread with more care beyond a certain point.

The Ladder sounds a little thinner, to my ears, at higher resonance settings than the Minimoog's filter does. (This is a common behaviour of many filters, as the fundamental frequency gets masked by the resonant harmonics.) But just as you'd expect from a Moog filter, the Ladder self‑oscillates when the resonance control is turned fully clockwise. This can be a disturbing effect at times, but it can be used to great advantage in some situations. In other words, it's very much a feature rather than a bug, and demonstrates how powerful this filter is; you simply have to know it and deal with it... and get some fun out of it! In fact, with a little practice, you might even be able to coax some Theremin‑like sounds out of this tiny module! 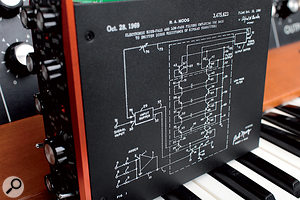 A small nod to genius: the 'ladder' schematic of Robert Moog's original US patent file is printed on the Ladder module.

Even though the Ladder filter is not a traditional synth module, it breathes the typical Moog character through every pore. It brings previously unheard sound design capabilities to the 500‑series form‑factor, and as you can see from the alternatives box, it has no real competition in this format. Some aspects, though, such as the ample set of controls on the face plate, come at a price — in this case the small knobs make it harder to control the huge sound of the filter than would be ideal.

If you are looking for a filter and you're not limiting yourself to the 500 standard, there are quite a few more options, including some from Moog. But in a true studio environment — which is what most 500 series modules are made for, and is presumably the target market for the Ladder — a simple feature like the balanced XLR audio inputs and outputs of the Lunchbox could be a deciding factor in making your choice.

No matter how you look at it, the Ladder is a quality tool that can inject some life and excitement into an otherwise dull and boring signal. This filter offers the user real inspiration, and it can transform and transcend a signal literally at the flick of a switch. What more can you ask?

On our web site you can find audio files created by the author that demonstrate what the Ladder (and his Minimoog!) can do.

As a creative sound-sculpting device, the Ladder does not have much competition in 500‑series format. If you're looking for simple, corrective high‑ and‑low pass filtering, the ShinyBox Guillotine might be worth a closer look. In other formats, there are many filters, such as Moog's own Moogerfooger MF101 Lowpass Filter pedal, which is considerably more affordable than the 500-series module. While this lacks some of the Ladder's features, it also brings external CV/Gate connectivity to the table.

The Ladder offers the typical, much‑loved Moog sound, and packs many special features in a small 500‑series package. Within this form factor there is no competition at all, but outside the world of the Lunchbox there many alternatives, some of which are equally interesting in terms of sound and features, and even better value for money. Nonetheless, the Ladder is a very inspirational processor that offers a classic tone, tailored (but not exclusively) to a professional studio environment.