The Squid is a sequencer with a mission: to unify your gear on stage and in the studio...

Almost every synth, drum machine and groovebox in my studio has an onboard sequencer that's capable of driving external devices. So do I need another sequencer that can't produce any sound on its own? The Toraiz Squid aims to persuade me that I do, promising a central control point for all my devices, with or without a computer.

The Squid is a stand-alone sequencer that can connect over MIDI, USB and CV. It has a pattern-based workflow, with 16 tracks storing up to 64 four-bar patterns that can be combined into 16 scenes per project. Beyond conventional sequencing, the Squid offers a number of unique ways to mess with sequences and inject timing and rhythmic variation.

Like the other Toraiz devices Squid is a chunky monkey, built for live environments. It has solid, clicky buttons, and a performance grid of 16 rubber pads with integral LED rings. The various rotary encoders are similarly robust with a smoothly‑stepped action. Two small screens serve up morsels of feedback and menu options.

The front panel is split into two main areas. On the right-hand side you have a familiar performance and composition zone for creating and triggering patterns. The left-hand zone is where you can get hands-on with the groove, speed and playback direction of your sequences, to name just a few possibilities. 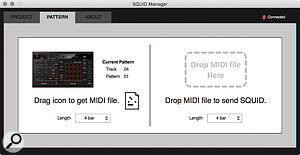 The Squid Manager software provides backup and file management, and also lets you transfer MIDI files into and out of your Squid tracks.I was delighted that the Squid can get by on USB power, although like the Ableton Push it has to dim its lights when doing so, and it's much easier to see the status of pads when using the DC adaptor. The USB port is primarily there for MIDI communication with a computer. It's also the conduit for backing up or importing project and pattern data (including MIDI files) via the Squid Manager software.

To get started with Squid you need to hook up some instruments (it has no internal sound sources or click). There are only two regular MIDI outputs, so you might need to daisy chain devices and divvy up channels if you have a lot of gear. I tested with a simple set up comprising two synths taking a MIDI port each, one synth using a CV/gate pair and other sounds sources on my USB connected laptop.

Track mode lets you focus tracks using the pads, and from here you can assign their outputs and channels. You can also set other properties for each track such as name, mono/poly mode, and playback speed. Other parameters are stored per-pattern within the track, including length, scale and arp settings.

So far so good. Next I wanted to set a tempo. I could see the Tap Tempo button no problem, but if I wanted to dial it in manually? This was one of a number of operations — setting pattern length being another — that there's little hope of guessing without reaching for the manual.

The Squid offers two methods for creating sequences: real-time recording and step programming. The former is generally done with the pad grid set to Scale mode (which most devices would call a Notes or Keyboard mode). A dedicated knob sets the scale and key, and you can shift the range of the pads. The pad lights indicate notes belonging to the selected scale and off-key pads are rounded to the nearest valid note. Disappointingly, there's no option to show only the notes in the scale.

Step sequencing happens in Trigger mode, where the pads represent 16 steps. Playback advances from the top left corner, which feels more natural to me than the step modes in MPC and Maschine which both start on the bottom left and run upwards. Patterns can be up to four pages long (I hesitate to say bars, as the step resolution can be changed) and both the pattern length and current page are indicated graphically on the screen. A small on-screen grid shows which steps are active. You need to page manually through the bars as there's no follow mode.

To assign notes to a step you hold a pad and use the encoders on the right to set the pitch, velocity and gate length. A fourth encoder sets step count, changing the actual length of the individual step, and by extension the pattern. Encoder five (Divide) is a retrigger/ratchet control, creating double, triple and quadruple triggers split evenly within the existing step length.

Each track is eight-note polyphonic. As you hold a step, the main encoder moves focus between the eight 'voices', each of which can have independent timing and velocity.

Step entry on the Squid can be fast and fluid, and feels similar to that on sequencers like the Cirklon, Pyramid or Elektron's boxes. Notes auto-trigger as you make changes, so it's easy to home in on the right one, and you can also copy and paste steps. You can hold multiple notes and change them together, or, if no notes are held, the parameter encoders affect the entire pattern relative to their current settings.

Both real-time and step-sequencing methods are greatly enhanced with an external MIDI keyboard (and I wish Pioneer had included a USB MIDI host port). In Scales mode incoming MIDI is constrained to the current pattern scale, which is often not the case with other sequencers. In Trigger (Step) mode a keyboard works in a similar to way to Novation's Circuit and SL MkIII, letting you add notes and chords to held steps.

The Speed Mod and Groove Bend are truly innovative and made me rethink the whole idea of feel in electronic music.

All tracks in a Squid project are structured as straightforward polyphonic note sequences. Unlike workstations of the MPC, Maschine or Push variety there are no track types or groupings to distinguish between drum tracks or melodic instruments. To sequence drums you can either use a different track for each sound, or use a single track with sounds spread out on notes. The first option would eat up your 16 tracks pretty quickly.

Using a single track is no problem when you record in real time, but is awkward for step sequencing or editing. It would be much better if you could choose to filter the Trigger view by individual notes, something you can do on the Squarp Pyramid, for example. (The Pyramid's basic piano roll display also makes this easier to navigate).

One nice touch when playing drums is the Note Repeat pad layout, where a row of the main pads gets commandeered for controlling repeats/rolls. You get separate pads for eighth, 16th and 32nd note repeats, plus another pad that pushes the others into triplets. There's a slight oddity in how Note Repeat behaves, in that while Repeat is active, hitting a drum pad will immediately trigger it (unquantised) then proceed to generate repeats on the grid. This often results in double hits and flams on the first trigger.

Round the back we find a USB port, MIDI In, Out and Out/Thru ports, two CV and Gate outputs and clock I/O, all on 3.5mm sockets and, unusually, a pair of DIN Sync ports — great news if you've got one of those unfashionable Roland drum machines collecting dust in a corner of the studio.