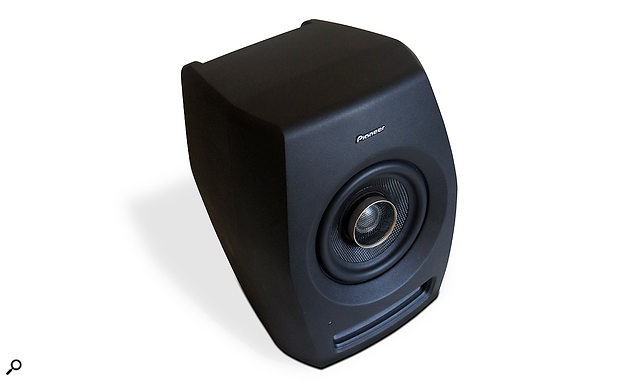 When we looked at Pioneer’s flagship monitor last year, we were hugely impressed. Does its smaller sibling have the same charm?

Back in the heady days of Spring 2016 I reviewed the Pioneer RM‑07 active nearfield monitors, and it’s fair to say that I thought they were great. The combination of thoughtful electro-acoustics founded on a well-engineered dual-compound driver, some neat solutions to port and enclosure resonance, and engineering quality that wouldn’t be out of place in a nuclear installation delivered the goods on pretty much every level. It helped too that the performance of the RM‑07, in the grand scheme of things, can be had at a relatively affordable price. They are an awful lot of monitor for the money.

So I’ve been hoping to find out, ever since my experience with the RM‑07, if its smaller RM‑05 sibling could repeat the success, and finally, as of a couple of weeks ago, I got my hands on a pair. Now, my RM‑07 review included a good deal of background on dual-concentric (or, more correctly, dual-coincident) compound drivers, their pros and cons, and the likely genesis of the technology for Pioneer, and as the RM‑05 appears to be almost identically engineered, I won’t repeat that material here. However, should you have missed it the first time, or feel like reminding yourself about the RM‑07 and compound drivers, that review is here: /reviews/pioneer-RM-07.

The RM‑07 gained its name partly, I suspect, from its use of a nominally seven-inch bass/mid driver, so it will probably come as no surprise that the RM‑05 is built around a slightly smaller five-inch unit. The RM‑05 enclosure is slightly smaller too, however the bullet-proof, die-cast aluminium construction that so impressed on the RM‑07 has been retained. If anything, the RM‑05, thanks to its smaller dimensions, feels even more as if it’s carved from a solid block of unobtanium. The slightly different proportions of the RM‑05 enclosure also seem to me to sit better with its overall form. Where the RM‑07 looks to my eyes slightly uncomfortable and dumpy, the RM‑05 definitely approaches ‘cute’ (although why a 57-year-old audio geek should believe himself to be a competent judge of ‘cute’ I’m not entirely sure). As with the RM‑07 though I’m still not convinced by the unremittingly dark enclosure finish. Couldn’t we at least have had a classy battleship grey?

The RM‑05’s smaller compound dual-coincident driver incorporates what appears to be the same metal-dome high-frequency element as the RM‑07, again enclosed by a short horn-style ‘waveguide’. The role of the waveguide is partly to isolate the radiation of the tweeter from the influence of the bass/mid driver, and as such can perhaps be seen as a slight compromise: the alternative approach, in which the high-frequency driver is more integrated with the shape of the bass/mid diaphragm, is more true to the philosophy of dual-coincident drivers. That alternative approach, however, is perhaps fraught with difficulties, not least that I understand some techniques needed to make it work optimally are protected by one or more patents owned by UK-based speaker company KEF Electronics.

The RM‑05 bass/mid driver appears to be fundamentally similar to the unit used in the RM‑07. The Aramid-fibre composite diaphragm and rubber roll surround look very similar, and the location of the high-frequency driver on the top of the pole piece requires the same larger-than-usual voice coil (this is a good thing, as it should increase power handling and reduce thermal compression). The unusually low crossover frequency of the RM‑07 is repeated on the RM‑05. It is slightly higher, at 1.7kHz, but this is still not far off an octave below where one would traditionally expect a two-way system to split the bandwidth between bass/mid and high-frequency drivers. All other things being equal (yeah, I know, as if that would ever happen!), a lower crossover frequency should tend to make a speaker’s dispersion less variable with frequency, but at the same time it demands more of the tweeter in terms of power handling and distortion performance at the lower end of its band. A low crossover frequency fundamentally demands a well-engineered high-frequency driver. 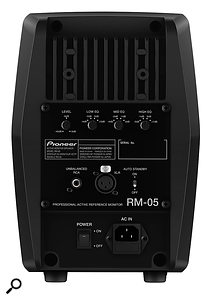 The rear panel houses controls for three bands of EQ adjustment, as well as an input-gain knob and the balanced and unbalanced input connections.Below the bass/mid driver on the RM‑05 front panel is a letter-box-style reflex port equipped with all the same subtle features aimed at suppression of pipe resonance and flow turbulence as fitted to the RM‑07. One of those features, given by Pioneer the somewhat less than snappy title, ‘Acoustic Filter Assisted System Tuning’ (AFAST for short), comprises a small blind tube attached around half-way along the reflex port tube. The idea behind this is that the AFAST tube creates a resonance that cancels out the fundamental pipe resonance (rather than the desired, and much lower, port/cabinet resonance) of the port tube. What I hadn’t fully appreciated on the RM‑07, however, is that the AFAST technique is also used to suppress internal enclosure resonance. Within the enclosure are a couple of resonant chambers tuned, presumably, to the fundamental standing-wave resonance frequency and (again, I assume) positioned so that their mouths are located at the standing-wave anti-node.

Continuing the theme of the RM‑05 being fundamentally a shrunken RM‑07, its amplifier power rating, specifically 50 Watts for both bass/mid and tweeter, is lower, but its rear-panel connection and control facilities are the same. Apart from the obligatory mains power inlet there’s balanced XLR and unbalanced RCA phono input sockets and, along with a power switch, there’s an auto-standby defeat switch, three switched knobs that select EQ options, and a variable knob for input gain. My usual moan about variable controls on items used in pairs ranking just below the chocolate teapot on the usefulness scale is, of course, unnecessary by now, but in the case of the RM‑05 it’s given a little added intensity by the EQ knobs being switched. Why could the gain knob not have been switched? As it is, gain control may as well not be present, because it’s only possible to be sure the pair are matched for level when the knob is at maximum (0dB) or minimum (-40dB). Thankfully, the 0dB option was absolutely fine in terms of monitoring gain structure for my DAW and interface.

Back on those EQ knobs; they provide -4 to +2 dB options for LF, -4 to 0 dB options for MF and -2 to +1 dB options for HF. These are at 50Hz, 140Hz and 10kHz respectively. As with the RM‑07, the 140Hz location for the MF EQ is unusually low, however it is quite a useful frequency at which to have some tweaking options.

The all-important part of the RM‑05 story is, of course, the conclusion. Does its undoubted build quality and classy electro-acoustic design result in as successful a monitoring package as the RM‑07? The short answer is, yes, it’s equally impressive, and at its significantly lower price than the RM‑07, perhaps even more so. As with the RM‑07, the RM‑05 immediately generated a sense of confidence and assuredness that what I was hearing genuinely reflected the quality, balance and dynamics of the material I was playing. I didn’t feel I needed time to learn its quirks. It images really well, its ability to deliver clarity and detail is up there with the best (I suspect the hugely rigid enclosure is a significant reason) and its basic tonal balance is suitably neutral, although, like the RM‑07, it is slightly on the warm side: its balance is more BBC than NS10.

The frequency response of the RM‑05, both on-axis (orange trace) and 20 degrees off-axis (red trace).

While I’d never argue that a single frequency response curve can reveal everything about a monitor’s balance, the slight warmth is perhaps visible in the FuzzMeasure response in the diagram. The upper mid-range level is a little suppressed between around 3 and 7 kHz, before it recovers around 10kHz (I tended to listen to the RM‑05 with the HF EQ at -2dB). Also illustrated in the diagram is a 20-degree off-axis curve showing the RM‑05’s gently falling and, apart from a narrow suck-out feature at 4.5kHz (almost certainly a result of HF output reflecting off the bass/mid driver), well-controlled dispersion.

Having praised the RM‑05, there’s no denying that it is a small monitor with relatively limited low-frequency bandwidth and maximum level. So if you regularly monitor at high levels or with material that relies upon copious low bass, the RM‑05 won’t be for you — but then probably no small monitor will be. And very occasionally, in its efforts to squeeze bass from a small box, the RM‑05 reminded me with just a hint of kick-drum sluggishness and bass guitar overhang why I generally prefer closed-box monitors. That shouldn’t really put you off though — the RM‑05 is still an outstanding little speaker.

There’s some great compact monitoring choices around the price of the RM‑05. Try the Dynaudio Lyd 5, the Neumann KH120A or the Genelec M030 for starters.

Pioneer deliver the goods again with their entry-level RM-series monitor. The RM-05 does everything a compact monitor should.