Marshall Jefferson talks about his early years in the Chicago house music scene, his seminal 'Move Your Body’ track, the classic equipment he's worked with and how modern music technology allows anyone to create with ease.

Marshall Jefferson has been a key player in the house music genre. Starting out in the Chicago house scene, his early tracks like ‘Open Our Eyes’ and ‘7 Ways To Jack’ were put out on the TRAX Records label and made an impact on the scene, but it was his use of piano in the 1986 release ‘Move Your Body’ that brought wider attention to his work. 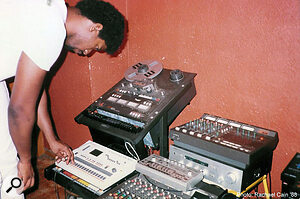 Since those early years, Marshall has helped to develop the acid house movement with his work on ‘Acid Trax’ with DJ Pierre in 1987. He also turned his hand to deep house, most notably on ‘Open Our Eyes’, released in 1988 on Big Beat. He headlined the first House Music Tour of Europe in 1987 and in the '90s did a five-year residency with the Tribal Gathering and Big Love Events in London, during which time he released his 1997 studio album Day Of The Onion.

In 2021, Marshall teamed up with Byron Stingily to release a new album Judgement under the Ten City band name, their first collaboration in 25 years.