Each Squid track can sequence up to five MIDI CC parameters alongside gates and notes. CC mode is a sub-mode of Trigger and uses the five main encoders. CC automation can be captured in real time while recording, or printed parameter-lock style by holding steps on the pads and setting values.

Each Track can have different CC channels assigned to the encoders. What is absent, though, is any way to save Track presets or definitions once you've configured a Track to control a specific device. This is a valuable feature in several competitors such as the Novation SL MkIII, Cirklon and Squarp Pyramid.

There's no way to generate CV modulation other than using note sequences. Tracks assigned to a CV/Gate output still have a CC mode but the data doesn't go anywhere.

Once an encoder has a value corresponding to a remote MIDI parameter it gives you direct control, but I was confused that after recording modulation it didn't seem to play back. I eventually realised that each corresponding step in the pattern has to be activated for the CC data to be transmitted. So after recording you have to manually tap every pad in the pattern, which seems a bit crazy.

With a few patterns saved in your project the real fun with the Squid begins. Basic sequence triggering works much like other pattern-based workstation and drum machines. Tap a pad in Patten mode to launch it quantised to the current grid. The Squid doesn't have an instant take-over mode: patterns always start at the beginning, even with launch quantisation off. Perhaps I've gone on about this enough in other reviews but, for me, being able to flip sequences at the current beat position is the key to performing arrangements with interesting fills and breaks.

The Squid faces the same challenge as other multitrack workstations built around 4x4 grids: you can only see patterns belonging to one track at a time, and you can find yourself flipping pad modes a lot. This is mitigated by the Squid's adoption of the 'momentary mode change' convention, where you can 'peek' at another view mode by holding it, making your selection then letting go.

Performance triggering is aided by a scene system. Combinations of patterns from each track can be stored as 'Pattern Sets' and triggered from a pad mode of the same name. This mode is analogous to the Scene mode in Maschine or Next Sequence mode on an MPC. 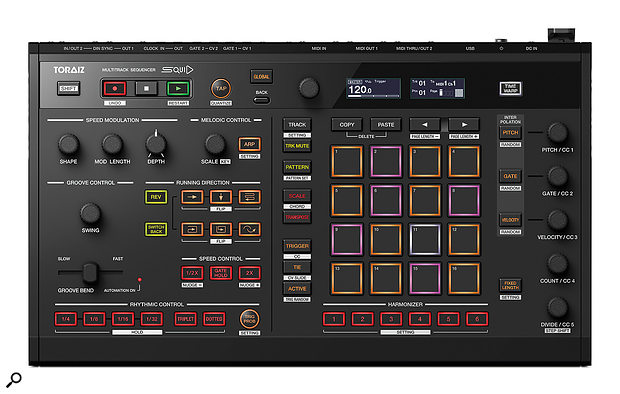 The Squid is a substantial piece of kit, measuring 37 x 22 cm and weighing in at 1.9kg.

Triggering sequences is really the most basic feature of the Squid as a performance instrument; it's everything else that the Squid does that makes it interesting.

Most sequencers let you change the playback direction of patterns, usually offering reverse and ping-pong options. The Squid laughs at their paucity of imagination. A whole section of the front panel is dedicated to messing with the order of sequences by offering numerous different playback routes through the step grid. I initially suspected that this was a gimmick and that the results would all sound random. Surprisingly, the different options often show a structure that relates to your original sequence. My favourite is the Odds & Evens mode that follows a two-steps-forward-one-step-back algorithm.

On-the-fly pattern variation is also afforded by the Active pad mode and Rhythmic Control section. Active mode mimics the Active Step feature on Korg's SQ-1 and Volcas, letting you skip specific steps in the sequence and throw the whole pattern out of phase with the grid. I'd love to see a Step Jump mode as well where you can momentarily hold pads to exclude all others.

Rhythmic Control is your classic stutter or roller effect, looping the most recent section of the pattern. Individual buttons choose the loop length from 1/4 notes to 1/32 notes. Trap fans will be pleased to see the Triplet and Dotted modifier buttons.

The Rhythmic Control section also contains a Trig Probability button. This applies an element of chance to each trigger in a pattern playing. You can't set this probability per-step as you can on Elektron devices. This makes it much simpler to use, but tends towards randomness as you can't preserve downbeats.

Things can get out of hand with this many options, so a great feature is the dedicated Fixed Length toggle button which can help to reign things back in. This lets you force a track to resync to the 1 after a set number of steps.

The most conspicuous control on the Squid's front-panel looks like a crossfader but is in fact the 'Groove Bender'. This slider is centre-sprung like a pitch wheel, and produces momentary shifts in a track's timing. Push to the left and notes will drag up to one step behind the beat; push to the right and they'll rush ahead. The results can be recorded into your Pattern non-destructively as automation. The Groove Bender can create total bedlam, or can inject subtle and interesting feel that is genuinely different to preset shuffle or groove templates.

Complementing Groove Bend is Speed Modulation. This is essentially a grid–sync'ed LFO affecting track playback speed. With various shapes and depths you can push and pull the timing of a sequence over cycles of two to 64 steps. Initially I really didn't get this, as at the default 16-step setting it tends to just throw everything out in a not-so-groovy fashion. However, set the cycle length to between two and six steps, play with the mod shapes and direction, and you open up a landscape of fresh shuffles, swings, bounces and alien jazz guaranteed to get your head nodding.

Much like Teenage Engineering's OP-Z, what the Squid is brilliant at is letting you take some starter patterns and mangle them in all kinds of ways in real time. It's also a single focus for sequencing all your gear. So on paper it seems an ideal centrepiece for a live performance setup. However, as it stands there are a number of issues standing in the way.

While Pattern Sets are ideal for improvising or orchestrating an arrangement in real time, there's no song mode to sequence changes automatically. This is perhaps surprising given that the Toraiz SP-16 provides a rather decent song playlist feature that you can use as the framework of a performance.

Perhaps a greater hindrance to live performance is the limit of 16 scenes in a project. Also, with program changes and CC assignments fixed per-track, and tempo set globally for a project, you probably couldn't run a live set in a single project. All of which wouldn't be a problem if it weren't for the fact that loading a new project involves menu diving and stops playback.

If you use a combination of MIDI, modular and computer-based synths there's a lot to be said for the idea of a hardware sequencer that unifies them all. The Squid achieves this, and is packed with fascinating, creative features for both generating and mangling sequences. The Speed Mod and Groove Bend in particular are truly innovative and made me rethink the whole idea of feel in electronic music.

I did find myself thinking that maybe the designers were so focused on these new ideas that some meat-and-potato workflow considerations got less attention. Certain operations (eg. Saving) are fiddly, and there's a lot of mode changing. Step programming (especially drum sequencing) could be improved a lot with a per-note view. The project and scene structure could also do with a rethink to make Squid a viable hub for a live set. As it is, it's best suited to being a creative studio tool. The bottom line is that I'd love to have the Squid around to take advantage of its powerful and playful sequence manipulation, but it probably wouldn't become part of my day-to-day setup until some of the bumps are smoothed out.

There's plenty to choose from in the sequencing scene at the moment. The Squarp Pyramid is the most similar in scope. It doesn't have the Squid's pattern-warping depth (or velocity sensitive pads), but it does have much longer track lengths, per-note step view and chaining. If you have deep pockets and don't mind a long wait you might consider the almost mythical Sequentix Cirklon. If you'd prefer a workstation with its own sounds check out Elektron's range, the Akai MPC or Force, or Synthstrom's Deluge. Finally, for a sequencer with a keyboard and recallable CC templates, consider Novation's SL MK3.

As well as its pattern-mangling tools, the Squid has several tricks for assisting sequence creation. Trigs, pitches, gates and velocities can all be randomised separately. There's also an unusual Interpolation feature which can be applied to these parameters, automatically creating a smooth ramp between start and end steps.

There's both a Chord mode and a Harmonizer. Chords mode stores various chord progressions onto the pads, while the Harmonizer holds up to six chords which affect notes playing back in real time.

My favourite, though, is the Transposer, which provides a simple interface on the pads for transposing the current sequence by sensible intervals. This is applied in real time, and can be recorded into the Pattern. As with the Harmonizer, Speed Mod and Groove Bend, Transposition is a separate layer so you can always revert to your original sequence.

Let's Do The Time Warp

While I've got a few niggles with the basics of sequence creation on the Squid, there's one feature that is brilliant. Despite the name, Time Warp isn't a function for changing timing of sequences — the Squid has a bunch of other mental features for that, which I've described elsewhere. No, Time Warp is a way to capture events that happened while you weren't recording. We've seen this idea in DAWs before but this is the first time I've found it implemented in such a usable way.

During playback, the Squid generates a rolling buffer of up to 16 bars, capturing what you do in the background. If you hit the Time Warp button the pads switch to a view that represents the bars currently in the buffer. Tapping a pad will begin preview from that position. The main encoder sets preview length from one to four bars. Previews launch in time, just like a regular pattern. Switching to Pattern view and tapping an empty slot will save the current preview.

Time Warp works really well, letting you jam away then jump back and grab things that are working. I used it in a similar way to how I record in Live: recording a part a few times over, then finding a section I didn't fluff, or capturing a few variations as separate patterns.

A unique and inspiring creative sequencer, with some room for improvements.