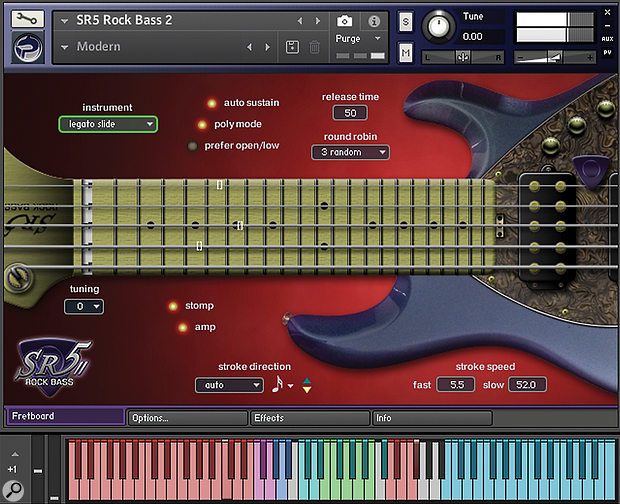 The main Fretboard screen displays string activity, current articulation, stroke direction and effects status, with the option to lower the range of the instrument by up to four semitones.

The original version of SR5 appeared in 2010 [see SOS December 2010 review] amid a market already well served by virtual bass instruments from the likes of Scarbee, Spectrasonics, Chris Hein and Vir2. Aimed squarely at the rocky end of the spectrum, SR5 featured the sound of a five-string Musicman Stingray played with a plectrum, sampled in great detail to include additional noises, fingering techniques and artifacts typically associated with an 'energetic' style of bass playing. There's a tangible sense of physicality to the SR5 sound — raw, lively, and full of attitude — yet equally adept at gentler musical styles despite its butch intentions.

The Story So Far

The architecture of the original version was somewhat unusual; the 'full Monty' with access to all features was an nkm Multi called the Super Performance Multi. This comprised 14 separate Kontakt instruments all assigned to a common MIDI channel, each hosting its own string or 'add-on' articulation, accessed via keyswitches. Whilst ostensibly cumbersome, this approach had its advantages. Since each articulation or 'add-on' was a separate Kontakt instrument, they could have their own volume or EQ, for example, and bearing in mind that memory was more of an issue in 2010 than it is now, individual elements could be simply deleted from the Multi if not required, reducing RAM usage and subsequent project loading times. In those days of mechanical hard drives the full Multi took a lunchtime to load, so Prominy also provided a single-patch Lite version containing the main fingered articulations (legato slide, non-legato, hammer-on/off, repetition, mute and pick) and the all-important release noise details, with 'intelligent' string selection but no option to force-select strings. Despite these economies, the Lite version was more than capable of producing extremely lifelike and elaborate bass parts.

SR5 2 not only consolidates the full set of features into one streamlined NKS-compatible Kontakt instrument, but adds chord voicings, strumming, arpeggio picking, built-in stompbox effects and amp sims to its arsenal. Now with a total of 21,700 samples (26GB uncompressed 44.1kHz 24-bit, 14.2GB on disk), there are 7700 additions to the sample pool, including a vastly expanded array of effects (noises, scrapes and other bass-centric performance effects), additional release noises and note-ending artifacts, an extended low range, and an additional 'buzz sustain' high-velocity layer that really gets those frets rattling.

The new GUI (shown above) takes its cue from Prominy's Hummingbird virtual acoustic guitar, and includes many of that instrument's abilities. The Fretboard screen gives real-time visual feedback of the currently sounding strings, neck position, current articulation, plectrum movement and stroke direction. Articulations and chord voicings are typically activated via keyswitches, but can also be manually selected from a drop-down menu. Up/down pick direction can be tempo-sync'ed, alternating automatically according to the chosen note value or forced via keyswitches. A choice of two, three or four round robins ensures note repetitions sound natural — important if you're pedalling on eighth or 16th notes. Among the new features here are on/off switches for the built-in stompbox effects and amp simulator, discussed later; and an option for drop-tuning the instrument by up to four semitones, taking the fifth string down to an ear-bogglingly low G — sure to delight the death metal fraternity/sorority. This has the knock-on effect of adjusting the playing range of all strings downwards by a similar amount. Also present are the option to favour open/low strings, a release-time amount, and slow/fast strum speeds for chords.

The Options tab presents five sub-pages; first up is the keyswitch mapping page. There are 41 assignable keys, spanning C-2 to C1, reaching well below the untransposed range of an 88-note keyboard, with a total choice of 61 possible actions that could be assigned. These are all pre-populated by default, however you are free to reassign them to meet your needs. Since it's unlikely that all 41 will be used in one performance, it makes sense to assign only the ones you need as close to the top of the keyswitch range as possible, making them accessible without having to transpose your keyboard. The actions in question are fingering techniques (legato slides, hammer-on/off/trills, non-legato, heavy hammer-ons, harmonics and fret-tap noise), 12 dyad chords, 24 full chords, 10 User chords and 11 effects types. 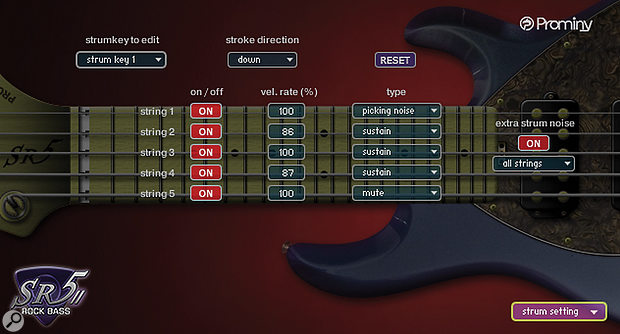 The strum settings can be radically different for each of the eight strum keys. In this example for strum key 1 (C2), all strings are on. Different sounds and volumes are specified for each string, and it plays with a downstroke.

SR5 2's strumming system is nothing if not comprehensive. Eight strumming keys are located within the cyan and green zones shown on Kontakt's keyboard display, each of which can be configured to play chords in specific ways. Since chords are constructed from individual samples (not pre-recorded), the strumming behaviour can be customised for each strum key, eg. whether a specified string will sound or not, its volume relative to the other strings, its sound (sustained, muted or picking noise) and whether a particular strum key plays an upstroke or a downstroke. The white (natural) keys E2 to B2 play each string individually, the available keys depending upon the currently selected chord type, so you can freely mix strumming and arpeggio/finger-picking styles.

Chord types can be selected in two ways: firstly by choosing from SR5 2's preset list of shapes using keyswitches. The second method uses chord recognition, whereby SR5 2 analyses any chord or dyad shape played within the red keyswitch area (C-2 to C1) and creates the necessary voicing. Where it differs from similar systems is that SR5 is only analysing the shape of the chord, not the pitch at which it's played. So if you want a major triad, it doesn't matter whether you play a C major, E major or any other major, as long as it's within that lower red keyswitch area. The actual pitch is determined by what notes are played in the blue playing area. It takes a while to get used to the fact that what you're playing with your left hand often disagrees with your right hand, but it's a more intuitive means of chord voicing, and avoids having to remember keyswitch chord assignments.

One drawback of SR5 2's key layout is the considerable distance separating the blue playing keys from the red keyswitches — shorter keyboards cannot access both without transposing, limiting what's possible in a real-time performance. An 88-note keyboard is recommended, with 76 notes being the shortest practical length.