Korg's Pandora series first appeared almost 20 years ago, but the range has evolved with the march of technology. Today's Pandora devices use Korg's REMS modelling technology to create amp, speaker and effect emulations, and the rhythm accompaniment functionality has also been updated.

As the name implies, Korg's Pandora Stomp puts this technology in a rugged cast-metal stomp-style pedal. It also sports a USB interface, via which the pedal can be both powered and edited, using free-to-download Mac and Windows software. There are 158 types of modelling effect, up to seven of which may be used simultaneously — and you get 200 factory presets, 200 editable user patches and 100 rhythm patterns to strum along to. When the pedal is bypassed a bright LED tuner comes on automatically, which is handy.

Everything is accessed using just a few controls. Above the display is a Play/Edit button (press and hold to get into Edit mode), a Utility button and a Rhythm button. Utility accesses things like alternate footswitch modes, speaker emulation bypass and so on. A Data knob on the right-hand side, next to the input jack, is used to select presets and has a role in the edit mode. For instance, on pressing the Rhythm knob, different rhythm styles are chosen using this Data knob. Four buttons below the LCD are used in editing but can also be arranged to select four favourite patches directly. 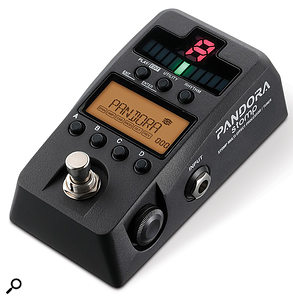 A mini-jack aux input, next to the main output jack, allows an external source to be connected for play-along practise, and the pedal allows you to pitch-shift the incoming signal to a convenient key within a ±1 octave range, which is useful when learning new parts. Power comes from a 9V battery, from a 9V centre-negative PSU, or via the mini-USB input (no USB cable is provided) and a three-position power switch select between USB, Standby and On.

A wide range of amp and cab models, including all the usual suspects, is followed by a chain of effects that includes noise suppression, which is useful for taming those noisy high-gain sounds. In addition to the expected modulation, reverb and delay effects, you get pitch shifting, intelligent harmony creation (monophonic solo lines only), and some pseudo-synth sounds, which are based on pitch tracking. Again, the last are mostly for monophonic sources. There are also filters, wahs and vocal-like formant effects.

Editing is much easier using the software than the pedal, not least because the boxes representing the effects modules show up at around the size of match heads in the Pandora Stomp's LCD screen, and the text inside them is so tiny that you need a magnifying glass to read it! The software GUI comprises two tabbed pages, one for editing and one showing the program list. The editor shows separate sections for dynamics, amp, cabinet, modulation, delay, reverb and noise reduction. The controls are very simple, in some cases with just a single knob and a menu. Even the amp section has just gain, bass, middle and treble controls to address the selected amp type.

As you might expect, the factory presets are there largely to show off the variety of sounds that can be achieved, and this means they include some fairly whacky effects as well as the expected 'snails in a blender' metal distortion treatments. Some of these heavy overdrive effects get quite noisy — but applying that much gain to the front end of a real amp would also generate a fair amount of noise, unless you used gating to hide it. I liked the clean sounds and the basic mod/delay/reverb effects; the pitch-shifting is a bit lumpy, but that's all that can realistically be expected on a budget unit, and it works well enough when layered behind the unshifted sound. You have to play very cleanly for any of the effects that rely on pitch tracking, such as the synths and harmonies, but if you do that they do work pretty well. 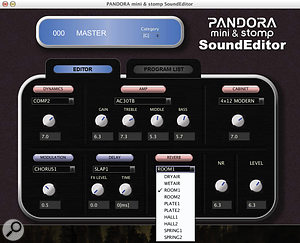 The software makes editing your patches much easier!Perhaps the weakest area is when you come to those lightly overdriven blues sounds, but even they can be tweaked and tuned to sound reasonable for practice — though I wouldn't choose these sounds for any serious recording, as there always seems to be a trace of digital grit in the sound somewhere.

All criticisms have to take into account the price, size and sheer versatility of this pedal. You could, for example, put the Pandora Stomp on your regular pedalboard just to take care of the special effects that your normal pedals can't handle, and leave the amp/cab emulation off. It also saves you the cost of a separate tuner pedal.

For practice, the sounds are a lot of fun and there's a decent choice of both metronomes and drum kit rhythms to play along to, which is great for improving your timing. The Rhythm button starts the drum section while hitting the footswitch to put the unit into Bypass mode stops it. At around the cost of a good overdrive pedal and cheaper than many plug-ins, though, the Pandora Stomp is great value and a very versatile device. Paul White