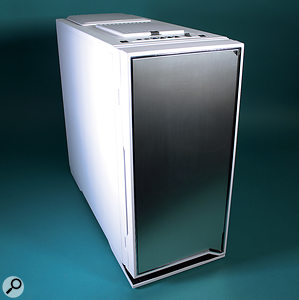 This is the fourth audio PC I've reviewed from Inta Audio over the last few years, and they always manage to pull something new and different out of the bag. They were the first company to send SOS an AMD-based audio PC for review, the first to use a case with a hinged front door that significantly reduced noise levels, and the first to take advantage of a commercial multi-way fan controller to stop cooling fans altogether when they're not required.

Even so, I was still surprised at the sheer number of new features on this, their latest flagship music PC. From its stylish white case that looks rather like an Imperial Stormtrooper's backpack and the total absence of traditional hard drives in favour of solid-state models, to the massive 32GB of installed RAM, this is a powerhouse of a machine to suit those who demand exceptional audio and sample-streaming ability and soft synth and plug-in performance.

I really liked the look of this Hush 2 case (available in both 'Stormtrooper white' and 'Darth Vader black'), but its beauty isn't just skin deep. Apart from a solid hinged front door with strong magnetic catches (lined with acoustic foam to keep noise levels low), this PC features a wider than usual selection of easy-access controls at top front, including on/off and reset switches, one USB 3 and three USB 2 sockets, and even a three-way fan-speed control, should you ever need to increase cooling to cope with (for example) placing the PC in a cupboard.

However, the most unusual aspect of this case is its external hard-drive bay on the case top panel: you can just unclip its cover and slide in an SSD or a SATA hard drive without having to undo any screws. To partner this bay, Inta Audio supply, as standard, a 2TB Lacie Minimus USB 3 hard drive — perfect for backup purposes, and an elegant solution to an age-old problem!

Inside the case, I found that wiring was neat and tidy, with just the gentle whirr of several slow-spinning 120mm cooling fans; two models pulling cool air in at the case front, a third pulling warm air out at the case top back, and a fourth mounted on the CPU cooler. The three case fans are under the control of the three-way speed control mentioned earlier, while the 'semi-fanless' 700-watt PSU has its own cooling fan that only spins up if the temperature rises above 65 degrees Celcius.

The four solid-state drives were Corsair Force 3 models, all mounted in 3.5-inch bays. There's a smaller 120GB model for Windows 7 Ultimate 64-bit and all the applications, while the other three were larger 240GB models allocated to Audio, Samples and Backup respectively. Having separate drives for audio and samples is an ideal arrangement for the musician who needs lots of audio tracks and streamed sample voices simultaneously, especially since each solid-state drive offers considerably higher sustained transfer rates than traditional mechanical hard drives.

At the heart of this system is Intel's popular 2600k processor, running at its default clock speed of 3.4GHz. Inta Audio do not offer overclocking as standard, particularly when the system in question is pushing the boundaries in other areas (such as featuring a massive 32GB RAM across four 8GB sticks), although this CPU and motherboard is certainly overclockable if you want to try for yourself.

The Sapphire HD 6670 graphics card has a generous 1GB of onboard RAM and supports ATI's Eyefinity technology, with screen resolutions up to 2560 x 1600 pixels and up to triple-head operation if you have three monitors. Fortunately, the graphics card is heat-sink cooled, adding no noise, although the size of the heat sink does block one of the otherwise available slots (either a PCI or a PCIe slot, depending on where the graphics card is installed).

Although the Asus motherboard already offers two VIA Firewire 400 ports, Inta Audio also fit a three-port Texas Instruments Firewire card in one of the PCI slots for maximum compatibility with Firewire audio interfaces. The board also features a built-in Bluetooth module for anyone that needs it, and dual LAN connections to make network storage or expansion easier.

Overall, despite the 20x optical and four solid-state drives, there's still plenty of expansion potential for those with even more ambitious requirements, with two empty 5.25-inch bays and four 3.5-inch bays still available, along with two PCI and two PCIe slots. The system also includes a black PS2 keyboard and mouse set in the price, although various options, such as Pro Tools or Cubase Editors Keys versions, are available. 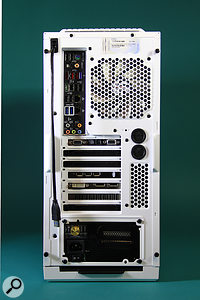 The back panel features a wealth of connectivity, but even more is to be found, easily accessible, on the top of the case.

As expected, the solid-state drives provided very quick boot times — from the 'Starting Windows' message it took just 15 seconds to reach the desktop. However, the system was also stunningly quiet, and I was glad at times for the blue LED lighting the case front panel, as otherwise it was tricky to tell whether this PC was even switched on without placing your ear right next to it!

The complete absence of hard-drive noise certainly helps here, although, of course, you are paying considerably more than you would for traditional hard drives. However, the other huge advantage of solid-state drives is their hugely increased transfer rates: a typical average rate for traditional hard drives like WD's Caviar Black is a very healthy 100MB/second, but these Corsair Force 3 SSDs measured a staggering 254MB/second, so massive track counts are feasible.

The CPU idling temperature sat at a comfortable 31 degrees Centigrade, while during my Prime 95 100-percent torture tests no core ever exceeded a safe 63 degrees, even with the top case fan control left at its minimum setting. The 'semi-fanless' power supply operates for 90 percent of the time without its fans spinning up at all, and it stayed totally silent throughout my testing regime.

Windows 7 had its power plan set to 'High Performance', best performance of Background Services, and Windows Sounds, graphic animations, shadows and fades had been disabled for optimum audio performance. The DPC Latency Checker utility showed no processing spikes above 100 microseconds. At 21GB/second, memory bandwidth measured about the same as the previous 2600k-based machine I reviewed, significantly ahead of previous PCs and perfect for those who want to avoid internal bottlenecks when streaming lots of samples.

This 2600k CPU was run at its nominal clock speed of 3.4GHz, so I wasn't expecting quite the CPU performance that I measured on the overclocked Rain Recording system reviewed in the June 2011 edition of SOS. The Sisoftware CPU Arithmetic score was 106GIPS Dhrystone (a reduction of 40 percent from the 176GIPS of the overclocked machine), and the Integer CPU Arithmetic score was 211Mpixel/s, compared with the 259 of the overclocked machine (just a 19 percent drop). However, Inta's CPU Multimedia Float performance was significantly ahead, at 288Mpixel/s (47 percent better than the 196Mpixel/s of the overclocked Rain Recording system), no doubt due to Inta Audio's use of a far more powerful graphics card. 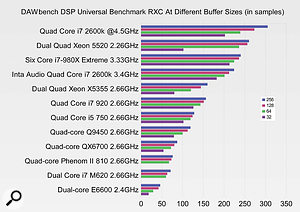 Once again, the 2600k Sandy Bridge processor turns in a solid performance at its standard clock speed, although if it were safely overclocked to 4.5GHz, this system could match the fastest in the chart.

The acid test for audio performance is a proper audio benchmark test. To make sure the review system got the best chance to perform, I'd asked for an RME AIO PCI-e audio interface to be fitted, so that I could do my DAWbench tests inside Cubase 6.

As I'd expected, performance was significantly lower than the system I measured with the same 2600k processor Turbo Boosted from a clock speed of 3.4GHz to 4.5GHz. At a conservative 256-sample buffer size, though, the Inta PC nevertheless managed a healthy 224 Reaxcomp multi-band compressor plug-ins, compared with 305 for the overclocked version, which is almost exactly in line with the 4.5/3.4 difference in clock speeds. This proves that if you were prepared to overclock this machine it should match the higher level of performance. At 212 Reaxcomp plug-ins, the 128-sample buffer result was, again, close to the clock ratio.

However, the RME card proved its mettle at low latencies. The Firewire audio interface I was sent with the overclocked Rain machine couldn't manage a 32-sample setting at all, yet at this setting the RME card results had dropped by less than 20 percent from the 256-sample settings, still measuring an excellent 182 Reaxcomp plug-ins. Once again, this proves that if low-latency performance is important to you, your choice of audio interface can be as important as the spec of the PC.

This system is designed from the ground up to suit the musician running complex projects who wants total reliability and rugged, workhorse performance. It should be suitable for a film or TV composer who wants to run video alongside music projects with up to three large screens, or musicians who demand lots of 24-bit/96kHz audio tracks (helped by the SSDs) and a huge number of streamed sampled sounds (facilitated by the massive 32GB RAM).

This is a luxury machine at a luxury price, but Inta Audio let you configure any of their systems in many different ways if you need to bring the price down. For instance, reducing the amount of RAM from 32GB to 16GB would cut the final price by a huge £549, while each SSD you replace with a standard 1TB hard drive would bring down the price by a further £150.

Rarely does any computer live up to the claim of being 'Ultimate', but Inta Audio's i7 Ultimate Audio PC is just that, offering the fastest boot I've ever experienced, as well as an 'is it switched on yet?' noise level. It's not cheap, but it is highly desirable!

There's plenty of competition if you want an audio PC based around Intel's 2600k processor. In the UK for instance, Millennium (www.music-pc.com) offer their Vortex Extreme i7 Music PC, and Scan 3XS (http://3xs.scan.co.uk) offer overclocked systems such as their SA68, while in the US, PC Audio Labs (www.pcaudiolabs.com) have their RokBox MC 7x series and ADK Pro Audio (www.adkproaudio.com) offer their Quad Xtreme with overclocking to at least 4.5GHz.

I think Inta Audio are being over cautious leaving this 2600k-based machine running at 3.4GHz. Although in the past overclocking has been frowned on by many professionals as 'pushing the boundaries until the PC falls over and then backing off a little', the 'k' in the designation of this processor stands for 'unlocked multiplier', meaning that Intel specifically cater for it to be overclocked. Various other professional system builders are successfully selling and guaranteeing such machines, and this one should be fairly easily overclocked as well.

Included in the package, Inta's Standard Care Plan offers a first-year parts warranty (return to base), with years two and three labour only, free return of the computer in the first year, and three years telephone and email support. You can upgrade to the Essential Care Plan with three years parts and labour for £49.95, while the £99.99 Premium Care Plan extends collection and return of your PC to three years, and gives lifetime telephone and email support.

Inta Audio's i7 Ultimate Audio PC is a tour de force for the musician who demands the best, with near silent operation, speedy solid-state drives throughout, and a massive 32GB of RAM to cope with complex sample-based projects.

Inta Audio i7 Ultimate PC as reviewed, £2649 including VAT