All loudspeakers, whether active monitors, or guitar/bass amps, tend to exhibit cabinet vibrations. Sometimes those vibrations are intentional and sometimes not but, either way, if allowed to pass into the structure on which the speaker is resting that structure can start to vibrate in sympathy, adding unwanted colorations to the sound. 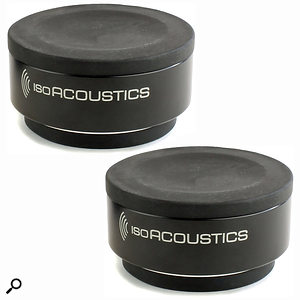 IsoAcoutics, a Canadian company formed in 2012, will already be well known to SOS readers, as we employ their L8R isolating speaker stands quite often in our Studio SOS visits, and there have been reviews of a couple of different L8R models by Paul White (October 2012) and Matt Houghton (March 2014). However, both of those reviews concerned complete stands — isolating legs joined together by a frame — whereas the product I’m looking at here is a new stand-alone isolating ‘puck’ called, logically enough, the Iso-Puck.

Iso-Pucks are sold in pairs, and the idea is to purchase a sufficient number to accommodate the weight of your loudspeaker (or other equipment). Each Iso-Puck can accommodate up to 9kg, and the minimum number that can be used under each speaker is three (for obvious reasons of balance). Heavier monitors might need more, of course, and six pucks could support a monster speaker of up to 54kg.

The Iso-Puck design is very elegant. An individual puck is reassuringly heavy at 176g and looks and feels very well made. The diameter is 60mm and they stand around 35mm high (which is lower than any of IsoAcoutics’ alternative speaker mounts. However, there is no ability to tilt the speaker up or down when using Iso-Pucks, unlike with the L8R stands.

Cleverly, soft rubber discs at the top and bottom of the Puck are slightly concave so that when loaded they deform a little to behave as gentle suction cups. This cunning arrangement gives excellent stability to the complete system; the speaker cannot be accidentally knocked off the Pucks, and neither will the Pucks slide off the mounting surface (assuming both the speaker cabinet and mounting surface are flat and clean).

In terms of construction, the top disc is fixed to a black anodised aluminium ring, which sits over a smaller silver aluminium ring to which is attached the bottom disc. Hidden between these two elements is the isolation mechanism itself, which I guess involves a rubber membrane of some sort.

The user manual supplied in the packet consists of a small piece of folded paper with some photos of Iso-Pucks in use, and an instruction that the logo should face forwards. I have read elsewhere a suggestion that the Puck’s isolation system is deliberately designed to behave differently for forces acting front-back, compared to those acting side-side (the motive forces from a working loudspeaker will tend to energise the front-back direction most, of course). However, I was unable to detect any obviously different compliance behaviour when exerting forces on the Puck in either direction. Nevertheless, the only reason I could see for not having the logo facing front would be if there was a desire to hide it, in which case rotating the Puck to put the logo at the back would maintain the front-back axis anyway.

For testing, I used three Iso-Pucks under each of my Neumann KH310A monitors (which sit on the top of a rack upstand on my mastering desk and weigh 13kg each. Until now, the Neumanns have been isolated with a well-known brand of foam pad, but while these have been perfectly effective they extend quite a long way in front of the speakers and don’t look very sophisticated. Replacing them with the Iso-Pucks (two at the front corners and one in the middle at the back) not only looks much better, but I found the system sounded a little better — there was a small but definitely repeatable improvement in the low-end clarity.

I also tried Iso-Pucks under my huge PMC IB1s (which weigh 36kg each), which normally sit on very heavy shot-filled metal stands, secured with Blu-Tack. I placed Iso-Pucks at the corners of each stand, with four just coping with the enormous weight, but noticed no significant difference — although to be fair I didn’t really expect much improvement given the huge mass and effective damping already in place in the stands. Perhaps the bass tightened up a little, but I wouldn’t swear to it. However, with the Iso-Pucks being so portable, I tried them on the monitor systems of a few friends using LS3/5As, PMC TB2s and Focal Twin 6 Bes, all of which were mounted on tabletops or desk shelves. In every case an audible improvement in overall clarity and tighter bass dynamics were clearly heard by everyone.

Of course, Iso-Pucks can also be used wherever vibration isolation would be beneficial (provided the loading weights don’t exceed the capability of an individual Puck). For example, IsoAcoustics recommends using Iso-Pucks under guitar and bass amps to bring a tighter low end and to maintain a more consistent sound from the amp, regardless of the nature of the floor surface. Pucks can also be used between amplifier heads and cabinets (reducing valve microphony), under heavy mic stands, and under all manner of electronic devices that might be susceptible to external vibration, such as gramophones and CD players.

Ingenious, elegant and highly effective are the terms I’d happily use to sum up the Iso-Puck, but I fear I must also add expensive to that list, too. A box of two costs $59, butnearly £60 in the UK, and the minimum requirement to support a pair of modest speakers will be three boxes, making the Iso-Puck option nearly twice as expensive as a pair of L8R or Aperta stands. And a heavy speaker would need at least four boxes, which adds up to quite a lot for something to help isolate a speaker, at least compared to some of the alternative solutions on offer.

Having said that, Iso-Pucks have the advantage that they can be used under any speaker (provided the loading weight is appropriate), so changing monitors won’t need new isolating stands of the appropriate size, and that will help to amortise the cost. And on a personal note, the three Iso-Pucks under each of my Neumanns are definitely going to stay there!

£59 per pair including VAT.