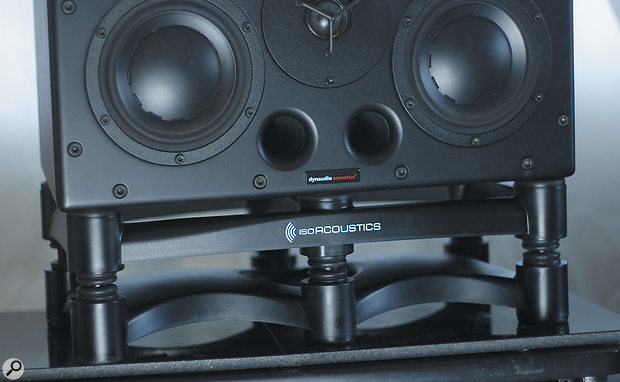 This isn’t the first time we’ve reviewed one of IsoAcoustics’ innovative speaker stands: Paul White looked at the diminutive ISO-L8R155 back in SOS October 2012 (www.soundonsound.com/sos/oct12/articles/iso-acoustics-l8r155.htm), and in its broad concept the ISO-L8R430 is very similar. All the stands in this range are intended to decouple a speaker from the desk or studio furniture on which it sits. The top part of the stand is light, in order to react to the speaker’s energy as quickly as possible, and the moulded plastic frames and co-polymer mountings have been designed to avoid unwanted resonances (which would obviously defeat the object, but are not unknown in commercial stands!). If you want a really good, clear, detailed explanation of how this system works, you could do worse than look at the video on IsoAcoustics’ web site. Where this model differs mostly from the ISO-L8R155, of course, is in its size — this one is 17 inches wide by nine inches deep, making it suitable for speakers with a larger footprint and, potentially, for use in the studio and on stage with guitar and bass cabinets.

I used a pair of ISO-L8R430s in my studio for a few months, both with my monitors and with a couple of guitar combos. My monitoring setup is based around a pair of Dynaudio M1s, the design of which places two woofers and two ports either side of a large tweeter. For its volume, then, the footprint of this speaker is considerable — and without additional gadgets, most of the vaguely affordable speaker stands I’ve looked at just don’t support the speaker properly. All too often they leave it delicately balanced, rather like a see-saw! IsoAcoustics’ ISO-L8R430s have been designed with precisely this type of speaker in mind, as I discovered when I talked to MD Dave Morrison at last year’s Winter NAMM show. They were conceived initially as the perfect partner for the popular Focal SM9 speaker, but they’re suitable for many more models, and if you’re uncertain about compatibility, there’s a list on the IsoAcoustics web site to help you find the right model for your speaker. (It’s nice to see a company doing this sort of legwork for you!)

Before trying the IsoAcoustics stands, I had the speakers placed on a rather Heath Robinson combination of Auralex MoPads, large, thick granite floor tiles and Blu-Tak, which together did a reasonably good job of decoupling the speakers from my Omnirax studio furniture. It didn’t look very pretty, though, and such a combination isn’t particularly cheap if you buy the tiles new. If I’m honest, there wasn’t a huge perceptible difference between the two systems — but that was no surprise, given the amount of trial and error that went into the DIY stands in the first place. If anything, the sound was ever so slightly tighter when using the IsoAcoustics stands, particularly in terms of LF transmission through the furniture. Compared with placing the speakers directly on the furniture’s built-in platforms, the difference was night and day.

Were I starting from scratch, I wouldn’t hesitate to plump for the ISO-L8R430s. They’re more elegant and more configurable than my DIY affair, and very quick and easy to set up. My only real criticism is that it wasn’t easy to test the stands set up at different tilts, simply because once the steel tubes are fixed in place and have had a weighty speaker bearing down on them for half an hour, they’re not easy to pull out by hand.

My stage days are (much to the relief of local audiences!) over, but I still spend plenty of time with my guitars and amps in the studio. The ISO-L8R430s do an effective job of decoupling a cabinet from a resonant surface such as a wooden floor (the nearest thing I had available to a stage), and the ability to tilt the amp slightly upward should be helpful in enabling musicians to hear themselves at slightly lower volumes. They won’t be suitable for all amps, simply because of the fixed size and the fact that the amp has to sit on the columns at the stands’ four corners: some cabinets will sit nicely on one, others on two, but others still might require a different-sized model.

One development of this design, which I’ve not yet tried, is a partnership with studio furniture makers Argosy, who have designed a range of attractive-looking speaker stands that incorporate the IsoAcoustics decouplers. These should be perfect for setting larger speakers slightly behind your furniture or console — or, of course, for having them free-standing in a hi-fi or mastering setup.