Korg already have an enviable track record for making high-quality apps, but in Gadget they’ve made their most serious step yet towards full music production. Gadget borrows an idea Korg have used before in which, instead of complex, daunting synths, you’re presented with a collection of simpler instruments, each fine–tuned for a specific role. These are collectively known as 'gadgets'. 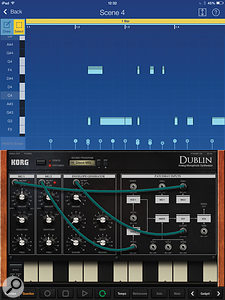 There are 15 individual gadgets (most with built–in effects) and more are promised in future. In one of Korg’s cheerier innovations, they’re named not after boring numbers and acronyms, but after cities. Three are drum machines, while the remaining dozen are synthesizers. Whichever way you look at it, Gadget packs in a lot of choice.

Within seconds of firing up Chicago, the tube bass machine, a few notes were enough to convince me you can have both quality and quantity. Its silver faceplate and 303–style knobs are a dead giveaway that there’s more scope here than mere bass line worship. There’s a full ADSR and an arpeggiator; plus, how can you not love a synth with knobs labelled Bite and Gnaw? Chicago’s gnarly tones are further boosted by integral effects that recall Korg’s EMX1 Electribe. If you’re into squealing, wibbling bass lines, this is an ideal place to start. In complete contrast, Chiang Mai is a gadget that uses Variable Phase Modulation to produce its chilled catalogue of bells, plinks, glassy pads and FM–style basses, all tamed by a low–pass filter.

Switching smoothly back to analogue emulation, Berlin is a lead synth with ARP–style sliders. Its controls were noticeably steppy, but this can be forgiven because of the sweet oscillator sync implementation and built–in delay. Indeed, the synth sounds so warm and fuzzy my forgiveness temporarily extended to Korg’s coders and their enduring start–at–zero envelope fixation.

To cover the full depth and variety of every gadget would require a minor novella, so I’ll mention just a few more random favourites, starting with the semi–modular analogue monster Dublin. Adorned with 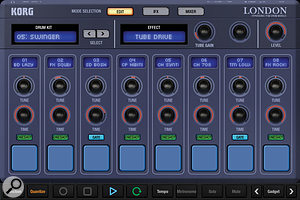 If anything I was even more impressed by another digital gadget, Marseille. This is a polyphonic PCM synth that forfeits programming depth in favour of a bank of 128 classic patches. These include passable versions of the M1 piano, Mellotron strings and flute, plus Korg’s patent breathy choirs and saxes to die for (well, somebody should). Further gadgets supply analogue polysynths, 8–bit games machines, wobble–prone bass synths and anthemic unison blasts — enough to keep you occupied for a very long time to come.

The trio of drum machines 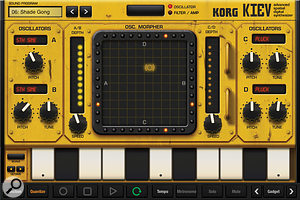 Kiev: vector synthesis Korg–style. may not seem generous compared to the broad selection of synths but the most comprehensive is the eight–voice PCM–based London, stocked and ready to go with over 400 samples. Or there’s my personal favourite, Tokyo, and its analogue modelling of kick, snare, tom and percussion. However there’s definitely scope for more adventurous drum gadgets in future. For example, one glaring omission is any form of user sampling or a sample import function to build original kits.

Having inspected the gadgets, I could no longer resist diving in and making tunes. Initially, I felt hampered by the fixed portrait mode; mostly because it left so little room for a playable on–screen keyboard, but also because Korg added the tiniest transpose buttons I’ve ever been challenged to prod. My fingers are slender and work–shy but even they proved too wide to reliably hit every on–screen object. However, button tapping was a minor inconvenience compared to the biggest issue I encountered: latency. This had been automatically set to its lowest value 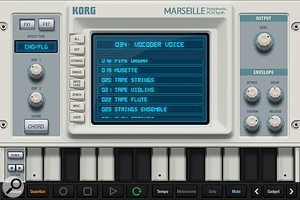 Marseille: a mini–Triton thrown in! (‘Safer’) on my iPad 2 and while the next option up (Standard) gave a better response, it taxed my poor machine too much and it wasn’t long before the inevitable crackles and stutters began.

Korg recommend five gadgets as a maximum for normal operation on an iPad 2 while, at the other end of the scale, an iPad Air should handle between 20 and 25. There’s a freeze function that would give me three more, but at the expense of dynamic interaction.

With a MIDI keyboard attached, the latency still took away a fair chunk of the pleasure, but other than that, song creation was mostly plain sailing. The random song-name generator earned a big thumbs up — all music–making software should include one! Having started a new song, it’s then a familiar process of creating and arranging scenes, each consisting of as many tracks (each track hosts a gadget) as your iPad can cope with. Via a function key you set the scene’s length, time signature and number of repeats, the building blocks of a basic linear structure. If, after recording, your notes aren’t exactly where you intended, note and automation editing cover the expected options with the minimum of head–scratching. 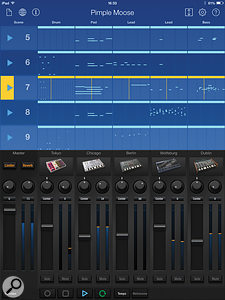 A Gadget song. The mixer can be folded away so you can access more scenes at once.

In performance, Gadget takes its cue from other looping, interactive software, in that you can trigger new scenes from the list and reorder the song on the fly, looping any scene at will as you interact with synths, drums or the mixer. New scenes kick in when the current one ends, but I’d have liked additional options to swap on the next beat or bar too.

There are some limitations, with the most annoying being the need to return to the main screen whenever you want tomute or solo tracks. Similarly, undo is not always available when needed, as I discovered when I deleted a scene I really meant to duplicate. I’d also love to have a slicker way to multiply the length of patterns in order to add variations. That said, there are tools for most common operations, including a (basic) song export function. Songs can also be shared via Soundcloud.

Gadgets was not cheap even at an introductory £19.99$28.99 (25 percent off its regular price) and prior to purchase iOS 7 needs to be installed. The new OS totally failed to invigorate my plodding iPad 2, which my wife is now eyeing as I scrabble to justify an iPad Air. As someone who bought Garageband and used it twice, a more important consideration even than the cash outlay is simply: would I use it? I reckon the quality and variety of Gadget’s instruments make it a tempting and inviting proposition, especially as Korg promise future updates that will introduce new gadgets and support for audio tracks. Personally I expect it to run and run, just not on an iPad 2.