This inexpensive and conceptually simple plug-in, compatible with all iZotope’s usual Mac/PC formats, applies the principles of the Shepard Tone to filtering. The Shepard Tone is the audio equivalent of an optical illusion: if you play a one-octave scale of the tone and then go back to the beginning, the pitch seems always to be rising. This is achieved by building up a tone from octave sine waves and then adjusting their levels as the notes move up the octave. In essence, the higher octave sine waves are gradually reduced in level the further up the scale you go while the lower octave waves are increased in level. (There are plenty of examples on the Internet if you want to hear this for yourself.) 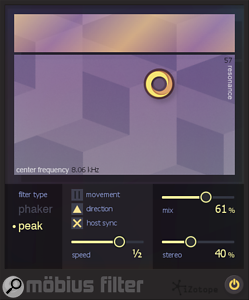 Möbius Filter has two modes: one a filter creating both peaks and troughs like a flanger or phaser, and the other creating only peaks. A draggable node in the upper area of the plug-in window adjusts frequency on the horizontal scale and resonance on the vertical scale, and the speed of filter movement can be controlled by a fader or locked to multiples of the song tempo. The filter sweep can either be set to move up or down, with a pause option to leave it set in one place. Two further slider controls adjust the stereo width and the wet/dry mix.

In Phaker mode (yes, Phaker), the effect sounds like flanging or phasing depending on the resonance setting, while in Peak mode it is more like a synth’s resonant filter. The illusion of constant movement in just one direction is quite convincing, and further dynamic effects can be achieved by adjusting the Frequency/Resonance node, though when I attempted to automate this in Logic Pro, the automation playback was very jumpy unless the moves were very slow.

Though Möbius Filter isn’t an effect you might want to use all the time, it makes a useful alternative to conventional modulation effects and is particularly effective for ‘lentil and crystal’ compositions due to its inherently ‘trippy’ character. It can also be used to treat effects such as delay or reverb to add extra interest and texture.