J Rockett Audio Designs were set up 10 years ago by session musicians Chris Van Tassel and Jay Rockett, when they decided to build the products they themselves would like to use. The duo was joined by Ron Hahn, who helped the company grow, and today they build a range of highly respected pedals that can still be bought for non-boutique prices. 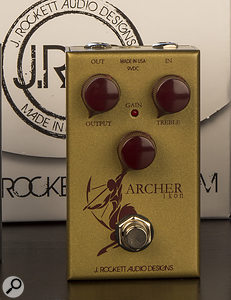 The Archer Ikon, based on the Klon Centaur.

Perhaps their most attention grabbing pedals are their silver Archer and gold Archer Ikon pedals, both inspired by the now out-of-production and highly desirable Klon Centaur, used by David Gilmour and other luminaries. By examining the original circuit and doing a lot of listening tests, the silver Archer was developed to be as close as possible to the original Klon. But the sound of the Klon Centaur apparently had a lot to do with the specific diodes used in the clipping circuit, and Rockett managed to secure a quantity of them to use in the later metallic gold Archer Ikon, which costs only slightly more than the silver Archer, and gets much closer to the revered Klon sound.

According to Rockett, the Archer Ikon has a very slightly warmer and more compressed sound than the silver Archer at lower gain settings, whereas at higher gain settings the Ikon delivers the type of smooth overdrive reminiscent of the original Klon. As with the original, an internal charge pump doubles the incoming 9V supply voltage to 18V to add headroom, and there’s a treble tone control to fine-tune the sound to suit the user’s choice of amp and guitar pickups. Other than that, there are the familiar gain and level controls along with a buffered bypass footswitch and status LED. 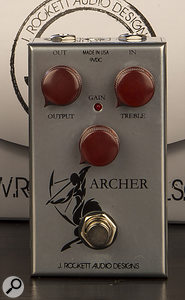 The Archer.At very low gain settings, I found that by juggling the treble and output controls I could get very close to the sound of the pedal when bypassed, which is always a good sign, confirming the pedal’s credentials as a ‘transparent’ overdrive. At slightly higher drive settings the sound takes on a bluesy edge, with a throaty mid-range creeping in as more drive is added. The first half of the drive control accesses all those touch-responsive, on-the-edge blues tones, whereas exploring the higher reaches takes you into Texas raunch territory, where those throaty mids become more assertive and the extreme highs are held in check to avoid harshness.

With my amp set clean, I got good results from the Archer Ikon, both with single-coil and humbucking pickups, and at higher drive settings this pedal definitely imposes its own distinctive mid character on the sound. At lower gain settings, more of the original tonal balance of the instrument is preserved, with just a nice halo of compression and edge.

If you’re after the essential character of a Klon pedal without having to pay a fortune for a second-hand original, the Archer Ikon certainly delivers, though I would suggest comparing it with the silver Archer alternative, as they’re both good, and which works best for you will ultimately come down to personal taste rather than absolute authenticity.