Karma are based in Cupertino, California, and their mics come directly from there via mail order. When I first heard that they were offering a matched pair of their K-Micro Silver Bullet omnidirectional capacitor mics at $29 for the pair, or $90 for seven mics, I thought somebody was having a laugh... but when good reports started to trickle through, I thought I'd better find out what all the fuss was about! 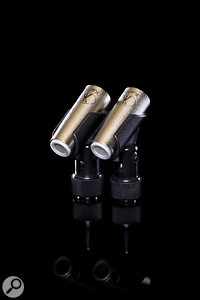 The mics use back-electret technology and are built in China. As with the company's K6 phantom-powered ribbon mic, the Silver Bullets were designed by a missile engineer, who has also had a hand in designing some better-known Chinese‑made microphones. It's easy to see how the mics got their name: they're very small and somewhat bullet-shaped. Indeed, the rear of the mic is the same diameter as the XLR it plugs into, tapering to around a half of that diameter along its short length. Plastic stand clips are included.

There's only a limited technical spec available on the Karma web site, but there's an informative frequency response plot, which shows a dip at around 2kHz and a presence hump at around 6.5kHz. The low end is pretty flat, all the way down to 20Hz and below. The highs roll off gradually above 15kHz, and are down to around -10dB by 20kHz. The maximum SPL is quoted as 135dB, and the sensitivity (quoted as -32dB ±2dB) held up well against other studio omnis in my tests.

The Silver Bullets presented no significant noise problems when recording acoustic guitar, vocals or hand percussion. As the frequency plot suggests, the overall character is slightly 'forward', but it doesn't become aggressive. Acoustic guitar recorded well during tests, especially in pop productions, with a tight, detailed sound that carried plenty of 'zing'. Vocals also came across with pretty much the right amount of presence for a pop mix before I'd even reached for the EQ. Being an omnidirectional mic, it has a good off-axis response, so it also worked well when recording a group of singers. I used the mics to record my daughter's theatre group ensemble and got very respectable results.

While the sound may be considered a bit bright, a gentle 6kHz EQ dip pretty much takes care of it, and the good low-end extension means there's plenty of bottom if you want to EQ for a warmer sound. Karma also recommend the Silver Bullets as drum overheads, and my tests confirmed that their response helps to bring out the transient details in the cymbals and snare drum.

I'd be curious to try miking a whole kit with a larger set of these little mics, as their small physical size could be a real bonus. In fact, I discussed this idea with Karma. They said that some engineers had reported occasional overloading if the mics were used very close to loud drums, and for that reason a new version with 5dB less sensitivity would be due for release shortly.

My final test was to mic my electric‑guitar amp from a distance of around 70cm, which produced a very workable sound. Given the omni pattern, the level of spill and room ambience is a little more than you get with a cardioid mic, but a folded duvet behind the mic easily takes care of that.

Despite their small size and laughably low cost, the Silver Bullets are more than capable of delivering solid results in the home studio. If the testimonials are to be believed, they've already found applications in a number of professional studios too. A pair of these mics may not be matched quite as well as more sophisticated models, but although some aspects of the spec could be better, the results are surprisingly good. It's always useful to have a couple of omnis in the studio, and if you already have one decent large-diaphragm mic, adding a pair of these little omnis would extend your recording options considerably — without depleting your bank account! Paul White