Kilohearts not only develop plug-in processors but also what they call Snapin Host multi-effects plug-ins, such as Snap Heap and Multipass, that host and combine their simpler plug-ins in various ways. This new Phase Distortion plug-in is designed to work as a module within one of these hosts, but it also works perfectly well as a stand-alone AU or VST plug-in, with a beta AAX version also available at the time of writing. Currently the only limitation to be aware of is that the Kilohearts plug-ins are designed only for use in stereo tracks, though mono versions are planned — as a Logic Pro user, I found the only way to get the plug-ins to show up in a mono track was to insert a mono-to-stereo plug-in first. 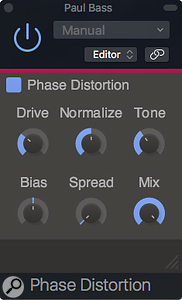 Whereas most distortion treatments work in the amplitude domain to add saturation or clipping, Phase Distortion uses the signal to modulate its own phase, producing a kind of ‘dirty FM’ quality (Casio used a type of phase distortion in creating their CZ series of synths from the ’80s). The control set is very simple, with Drive setting the intensity of the distortion and Normalize helping make the effect independent of the input signal level. Tone is particularly important as it filters out a lot of unmusical high end, while Bias applies a constant phase offset to all the added harmonics. This, in conjunction with the Spread control, produces a pseudo-stereo effect. The designers have also added a Randomise button for when you run out of ideas.

The GUI is resizable and, if you have a touchscreen, you can access the controls directly when the plug-in is in stand-alone mode. You can’t do this within a Kilohearts host plug-in, but then I can’t think why you would need to!

Logic Pro already includes a phase distortion plug-in that behaves in a very similar way, so Logic users may not feel a desperate need to buy this one, but users of other DAWs in search of gritty new sounds will find Phase Distortion has much to commend it. The results depend very much on what you feed in, and harmonically complex sources can get very messy and dirty unless you use the Tone control to shave off the highs. Simpler sources, particularly synth bass parts, produce a more controlled outcome where the added harmonics are mainly musical, adding to the punch and complexity of the sound. Some highs may still need to be rolled off, but a very simple bass sound can be elevated to something more aggressive and tonally interesting by adding a little phase distortion. And if you want to dial in some excess to create something really filthy, there’s plenty of that on tap too. Simple but effective.