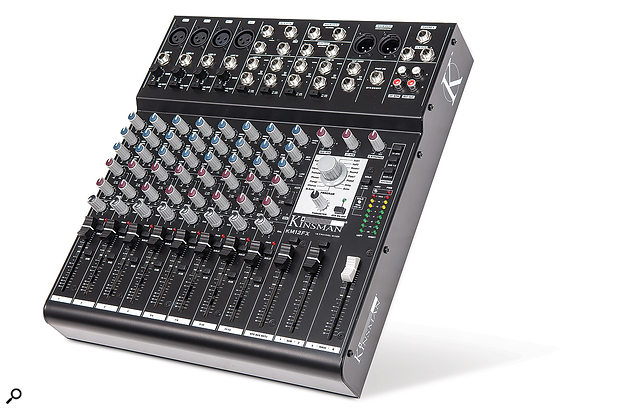 The market for mini mixers may be crowded, but Kinsman’s entry offers an excellent balance between affordability and ruggedness.

Kinsman’s KM12FX is a general-purpose analogue mixer with inbuilt effects. It follows a conventional format that makes it well–suited to smaller live–sound and DJ applications as well as studio work where its stereo channels provide an ideal way to submix outboard synths. If you don’t need as many line channels, check out the KM8FX, but given the low cost and small size of the KM12FX, why not go large? As with most small mixers, the channel count, which in this case is 12, refers to the overall number of main inputs, not the number of microphone inputs, of which there are four. The remaining eight inputs are configured as four stereo line-level channels, though there are also two sets of stereo return jacks feeding directly into the main mix. The aux 1 return has a level control, as does the two-track return.

What sets this mixer slightly apart from some other budget offerings is that each channel can be switched between the main mix or a separate submix with its own output jack. Each of the two outputs is controlled by a separate 60mm fader, and the sub can be switched to feed back into the main mix for subgrouping. Also on the plus side for live use is that the internal effects can be bypassed using an optional footswitch.

So, if that format looks like it might work for you, what are the details? Well, power comes from an external adaptor, and much as I hate the things, that’s pretty much par for the course for a mixer in this price range. There’s a power switch on the rear panel as well as a global 48V phantom power switch. All four mic/line input channels are identical, with XLRs for the mic input and a jack for the line input; both gain trim pots and 75Hz low–cut switches are included before the three–band EQ. This offers shelving at 12kHz and 80Hz, with the mid fixed at a practical 2.5kHz. From the EQ on down, the same control format carries through to the stereo line channels. Aux send 1 is switchable pre/post for each channel, and the second send (EFX) is fixed post–fader, feeding the internal effects as well as a send jack. That leaves pan controls for the mono channels, balance controls for the stereo channels, plus a solo button, peak LED, sub switch and fader per channel. There are no low–cut switches or gain trims for the stereo channel inputs, though the sensitivity can be switched between +4dBU and –10dBV for each of them. For mono operation the left jack is used, and both balanced and unbalanced sources can be accommodated.

Other than the main outs, which are doubled up on both balanced jacks and XLRs, and the usual RCA phonos for the two–track ins and outs, all the other connections are on jacks. These include a headphone output and a separate control room output, where the source can be selected from two–track return, sub 1/2 and main L/R, using latching buttons that allow any combination of sources to be heard at the same time. A single level control adjusts both the control room output level and the ‘phones level.

When a Solo button is down, the channel’s peak LED comes on as well as a solo LED in the master section. In this mode the signal level can be read from the main eight–step LED meter, which normally follows the output level. Unusually for a mixer of this price, the solo mode can be switched between pre– and post–fader, the latter setting being more commonly known as Solo In Place.

Conspicuous by its silver panel background, the effects section has its own level control fader plus a main/sub switch, and is based on 16 effect-type presets. The second eight effects are made up of reverbs and delays of the type you might typically use in live performance, while the first eight are more specialised and would normally be applied to a single sound source. These cover the usual modulation effects as well as rotary and auto–wah effects, though there is one stereo echo in this section that may have broader applications. A button with status LED turns the effects on or off as an alternative to using a footswitch.

There’s no tap–tempo button for the delays, though there is a 16–position parameter knob that adjusts the most important parameter for each of the effect presets. Note that as the effects return can be switched between the main and sub buses, you have to take care how you use the effects when input channels are routed to both buses and subs as, regardless of the channel’s individual routing setting, the effects only appear in the main or sub mix depending on which one you select.

In very general terms the mixer works well; the circuitry is adequately quiet with a useful degree of headroom, the EQ is usefully musical and the routing offers all you could expect at this price, and perhaps just a little more courtesy of the sub bus. The brief but clear manual doesn’t include any specifications, which is a little frustrating but at least it explains what the controls all do.

Moving on to the effects, the reverbs cover fairly short and bright treatments to large booming halls, with the rooms and smaller settings being the most useful for live vocals. While not offering high–end reverb performance, the reverb tails add an effective sonic gloss without getting too splashy.

I’m less convinced by the delays, other than the basic Echo patch, which is quite usable, having a range of delay times and just a smattering of feedback. By contrast, Delay has so much feedback applied that the repeats hang on excessively to the extent that only a dub mixer could love it. Stereo Echo is OK on the feedback front, but seems only to offer delay times that range from too long to far too long. All these would have been so much more useful with the addition of a tap–tempo button and, ideally, a flashing LED to show the delay repeat rate. However, we did get a bypass footswitch jack.

The modulation effects are pretty standard and do their jobs perfectly adequately, though I can’t see them getting much use in a live setting and in the studio you’d probably go for a plug–in to do the same job. A wider range of delays and reverbs might have been more useful to most people.

Given the price, the KM12FX offers decent value and its folded-steel construction should make it reasonably robust. Other than some of the odd delay choices it makes a great workhorse with plenty of routing flexibility to earn it a place in smaller studios.

The main alternatives offering comparable features at a similar price come from companies such as Behringer, Samson and Alto, though Yamaha’s smaller mixers are also very affordable.

A useful mixer for small live-sound applications where line inputs are needed alongside microphone inputs.