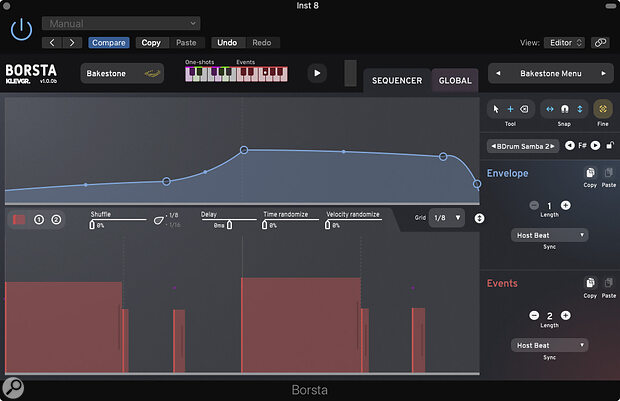 Borsta is a brushed percussion instrument plug‑in available in AU, VST and AAX formats for PC and Mac, and also available for iPad. Its audio engine is designed to simulate natural‑sounding brush playing and it offers 18 different instrument sounds, including snare drum, frame drum, cajon, djembe, rusty bucket, chains, cardboard pipe, spade and so on, including multisampled one‑shots and round-robins. Different pattern types are loaded for the various preset menus but it is possible to use any pattern with any sound menu.

While this may seem like an oddball instrument, it is actually capable of some really natural‑sounding rhythm patterns, many with a distinctly ethnic flavour.

There are actually three Event views, as selected by the red Strokes box or ‘1’ or ‘2’ buttons, the number buttons corresponding to the one‑shot types available from the current sound type menu. Buttons at the bottom of each hit, represented by vertical lines that also reflect their velocity, select between their open and closed sounds. There are tools for adding and deleting events, snapping to grid etc, as well as sliders to adjust shuffle, delay, time randomisation and velocity randomisation amounts.

Each sequencer has independent sync settings for Host Beat, Direct and, in the case of the Envelope sequencer, External, which hands over brush control to an external MIDI CC. The length of each sequence can also be adjusted to add more steps.

The Global tab brings up a mixer that allows adjustment of the levels of the Brush, Brush On, Brush Off, and both One Shots (open and closed), as well as a master level, a master reverb, master room ambience with a choice of IRs, a three‑band EQ, and global controls for pitch and added harmonics.

While this may seem like an oddball instrument, it is actually capable of some really natural‑sounding rhythm patterns, many with a distinctly ethnic flavour. The brushed drum sounds are very realistic while things like the metal spade sound almost as though they are being scraped or rubbed. For some musical styles Borsta may provide a complete rhythm part, though I can also see it being used to add ‘toppers’ to more basic drum loops to give them interest. If you’re after something that sounds really organic, Borsta is highly recommended.

Will Gregory: My Favourite Synths
5 days 30 min ago.