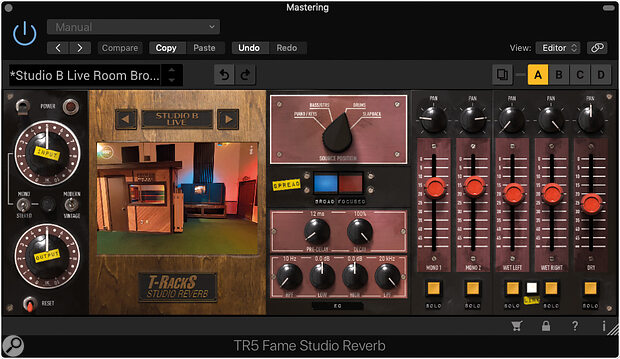 IK Multimedia’s Fame Studio Reverb emulates the sound of the legendary FAME studio in Muscle Shoals, Alabama. It can be called up either as a single plug‑in or from within IK’s T‑RackS 5 shell, and it serves up eight different spaces (two live rooms, five isolation booths plus an echo chamber) as well as an EMT plate reverb.

To create this plug‑in, IK helped FAME’s Rodney Hall restore the disused echo chamber back to its 1960s condition, and kit it out with its original equipment. They also worked with the studio’s engineers to capture the mic placement used on their most iconic albums, along with the location of the performer within the space. Thus, once you select the type of source to process (the options change according to the space you’ve selected) the microphones and sources are positioned automatically at the appropriate positions within the room or booth. If the plate reverb is selected, the instrument type dial turns into a decay time control.

IK helped FAME’s Rodney Hall restore the disused echo chamber back to its 1960s condition, and kit out with its original equipment.

As well as exploiting FAME’s extensive vintage mic locker, IK put their classic mixing consoles to good use. Studio A is equipped with a Neve 8232 console, while Studio B houses the restored SSL 6056 E which was used on Stevie Ray Vaughan’s best‑known albums, and both virtual studios can instead make use of FAME’s Universal Audio hand‑built 610 console — the mixer that was used in the first few decades of the studio’s 60‑plus years. The 610 is accessed in this plug‑in using the Vintage input option.