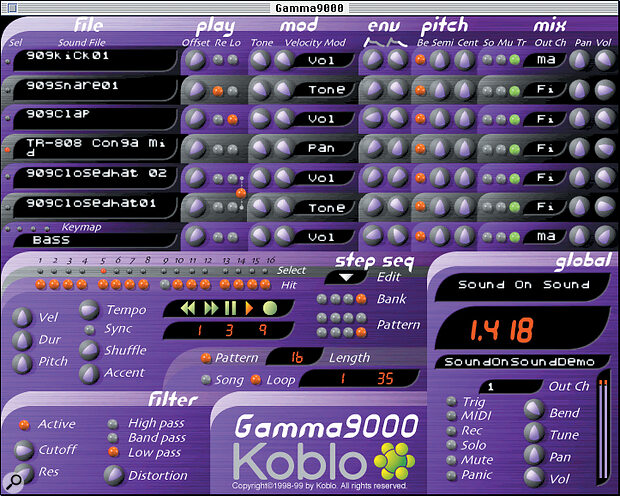 Koblo's software instruments are fun and easy to use, with brightly coloured, single‑screen user interfaces. Derek Johnson and Debbie Poyser try out their latest, a virtual drum machine which can be run as a stand‑alone application or alongside a MIDI + Audio sequencer.

Devotees of software instruments should be very much aware of the 9000 family from Koblo. This Danish company came to the fore in the first wave of software synths, with their Vibra series (reviewed in SOS December 1998), and turned their corporate hand to software sampling with Stella 9000 (reviewed November 1999). Though Stella didn't actually sample, it provided an attractive, tweakable interface for transforming samples from a variety of sources. The Koblo trinity is completed by Gamma 9000, a software drum synthesizer with the distinctive richly‑coloured Koblo look.

Gamma 9000 aims to be a complete drum machine, offering a selection of preset sounds, each of which can be extensively edited. Sounds can be mixed and matched into different kits, and Patterns and Songs can be written for them with a Step Sequencer section. Users can import their own samples too, so sonically the program is open‑ended.

As with all Koblo instruments, Gamma 9000 easily interfaces with other software running on the same computer. It's compatible with Steinberg's Cubase VST MIDI + Audio sequencer, using the VST 2 interfacing standard, and supports DirectConnect for integration with Digidesign Pro Tools digital recording systems (including the low‑cost 001 system), and MAS, for use with MOTU's Digital Performer audio sequencer. With these technologies, individual Gamma tracks (and other Koblo instruments) can be routed to an audio sequencer's mixer.

Running Gamma 9000 alongside a sequencer increases the burden on the host computer. For those who prefer not to, or don't have a powerful enough machine, Gamma's output can be recorded direct to hard disk as a Sound Designer II file (including any real‑time parameter changes made during recording) so the program could be used to generate funky loops for importing into a sequencer.

All Gamma's action takes place on one screen. The top left hosts a sound list, comprising six individual samples plus a 'Keymap' section accommodating up to 100 extra samples, though only four of the latter can play simultaneously. Controls for modifying each sound occupy the area to the right. Sound names appear in windows, and clicking on one summons a file selector giving access to samples stored on your hard drive; in the case of the Keymap section, this lets you add individual samples one at a time, which are automatically assigned to consecutive MIDI note numbers. (The key assignments of the remaining six sounds are preset.) Gamma comes with around 50Mb of samples, including sounds from classic Roland drumboxes and the Linn 9000, alongside a varied selection of hits, noises, real percussion, bass sounds, and Eastern textures. There's a bias towards electronic/dance, but this needn't be an issue given that your own samples can be substituted anyway.

Gamma's sound‑modifying section isn't quite as comprehensive as that found on Vibra or Stella, but this is a drum machine after all! The essentials are certainly here, and one or two pleasant surprises too. Each of the six main drum sounds, and the Keymap collection, has a simple attack/release envelope, plus a basic tone control (actually a low‑pass filter). Level, pan, mute and solo can also be set for each sound, and each can be tuned over a huge ±96 semitone range. Fancier parameters include a sample start‑point offset control allowing a sample to be triggered from a point other than its start, a reverse parameter, and a simple loop facility. The last may seem a little odd, but pitched sounds can be used in Gamma so it's actually useful — and it adds a delay‑like feel when applied to single hits. Lastly, incoming velocity information can control pitch, volume, pan, tone or sample start‑point offset.

Synths, software or otherwise, live or die by their filters. Perhaps unfortunately, there's only one on board Gamma9000, rather than one per sound. You can route any sound to the filter — to treat everything in the kit bar the kick drum, say — but there's no 'send level' to the filter, it doesn't have its own EG, and a sound routed to the filter can no longer be routed individually to other software on your computer. On the up side, the filter's controls respond to MIDI controllers, so it can be tweaked in real time by a hardware MIDI fader box or MIDI sequencer. (Speaking of controllers, a growing number of instruments feature front‑panel knobs which can be configured to transmit MIDI data, and if you have such an instrument you can save a few quid by using them instead of a dedicated controller unit. We set up the four controller knobs on our Yamaha A5000 sampler to tweak Gamma sound parameters, which worked perfectly.) On‑screen knob movements can also be transmitted from the software, albeit one knob at a time.

Filter controls are simple, but sufficient: high‑pass, low‑pass and band‑pass responses are available (all at once, if desired), cutoff frequency and resonance can be altered, and a powerful distortion facility (actually, more like filter overdrive) adds a warm, fuzzy edge without ever becoming harsh or unpleasant. The filter in general is meaty, offering analogue feel with a digital edge. Even when tweaked to whistling, its output is never too brittle or sharp.

Gamma 9000's step sequencer offers similar facilities to classic drum machines such as Roland's TR808 and 909. Each drum sound equates to a track in the sequencer, so there are 10 tracks in a Pattern, and each track can have up to 16 steps — though you can't mix track lengths within a Pattern for polyrhythms. At any one time there's access to four banks of eight Patterns, which doesn't seem terribly generous, but it's enough to write a reasonably sophisticated Song. Patterns are chained into a Song in a fairly straightforward manner, up to a maximum of 999 per Song. Only one Song is available at a time, and Songs are saved with Pattern and sound settings as Presets.

Pattern steps are shown by a row of virtual LEDs which light on each active step. Note duration, velocity and pitch can be set per step, and there's also an Accent facility similar to that on the TR808, where accented steps cause every sound playing on that step to be accented. The pitch option, while fiddly to use, is perfect for stretching the 'drum machine' concept, allowing Gamma to play tunes. In fact, the Keymap section has a couple of bass multisamples amongst the Presets; the only thing that stops Gamma from emulating a TB303 is a slide or portamento control. Tempo can range from 30 to 1000(!) bpm, and a Shuffle parameter adds a triplet groove feel. A Sync button in this area tells Gamma 9000 to sync to incoming MIDI clock, and there's also a transport bar for Pattern/Song navigation.

Further editing facilities are hidden under a pop‑up menu: the contents of tracks and Patterns can be erased, copied and pasted. It's also possible to erase selected data (steps, pitch, velocity, or duration). Finally, there's Randomize and Rotate, nice little features which can help produce new material if you're short of ideas: the former autonomously generates a new track or Pattern, and the latter moves a whole track or Pattern forwards or backwards one step — so that, for example, step 1 of a Pattern would occur on step 2 and step 16 would flip over to step 1. This operation can be performed repeatedly if desired, and though there's no Undo you simply Rotate in the opposite direction if you don't like what you've done.

The step sequencer is generally easy to use and quite conducive to experimentation. It's straightforward to create rhythms simply by clicking on and off steps until you like what you hear. In addition, you can input drum parts from the Mac's keyboard or an attached MIDI keyboard, complete with velocity values and pitch information.

While a software drum machine can't really be as immediate and hands‑on as an 808 or 909, software has its own advantages — easy integration into a software‑based studio, clear visual feedback, and an infinite capacity for new sounds. And with Gamma 9000 Koblo achieve the translation from real to virtual in very commendable fashion. You can only tweak one knob at a time, of course, unless you add hardware MIDI control, but if you're running Gamma 9000 with a sequencer, parameter changes can be recorded in several passes. Effects would be welcome, but the word is that this may happen, along with other exciting things, in the next versions of the 9000 family.

Very individual‑sounding rhythm patterns can be produced with Gamma 9000. It's fun and fast to operate, the supplied sample set is usable and comprehensive, and the sound is exciting, with a vintage edge. Definitely recommended, if you have a reasonably high‑spec Mac.

As you can see from the screenshot (left), Gamma's controls lack value calibrations. This is quite fitting for a 'mouse‑on' kind of program that doesn't require users to have any knowledge of what the various parameters might do in order to produce great results. However, if you like to know exactly what you're doing, there's the Global section.

Simply clicking on a control shows its name and assigned MIDI Controller number in the Global display — useful if you're setting up a hardware controller with which to operate Gamma 9000 — while a large numeral underneath changes to show a parameter value if the control is moved.

Rounding off the Global section is a group of general controls, including the Rec button for recording to hard drive, overall Volume, Pan, Mute, Solo and Tune controls, and an output level meter.

After this review had been written, Koblo announced that they'd reached a worldwide (except Japan) distribution deal with Digidesign, and would be officially merging their three software instruments, Vibra, Stella and Gamma, into a single £480 Studio 9000 package. However, some retailers will still have stock of individual family members, including Gamma, priced at around £99 — check SOS's retailer ads to find a copy.

Koblo do not suggest a specific Macintosh to run Gamma 9000, but we'd recommend a fairly powerful one. On our 250MHz 6500 Gamma exhibited a bit of sluggishness, even when running alone, though it was bearable. Koblo do specify MacOS 7.5.6 or better (MacOS 8.5 recommended), 8Mb free HD space, and 12Mb free RAM.

Koblo programs have arguably the most approachable front‑ends in the virtual instrument world, and Gamma 9000 is no exception. A great‑sounding alternative to a classic drum machine, as long as you understand the limitations of working with software.