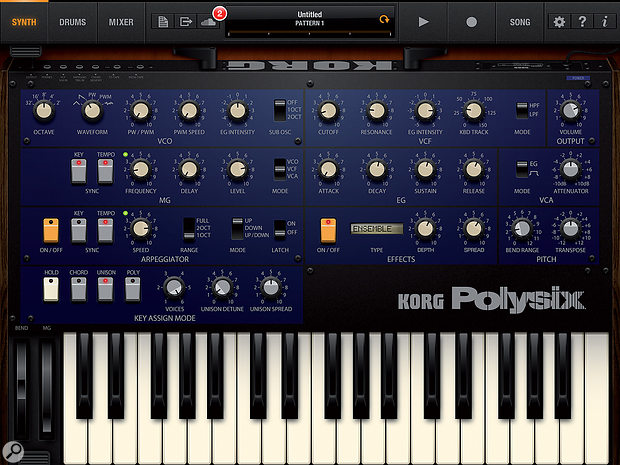 Korg released the original Polysix in 1981, when it went head-to-head with Roland's Juno 6 for keyboardists who wanted a cheap programmable polysynth as an alternative to the prohibitively expensive Prophet 5 and Jupiter 8. Thirty-one years later, we now have the iPolysix app for iPad. It's not a cheap app, but it's certainly cheaper than sourcing an original (and fixing the failed key contacts!). Does it do the original justice?

The iPolysix faithfully recreates the original's architecture, which had six VCOs, one for each of its six voices. These six voices could be played polyphonically, or stacked in unison mode, and the iPolysix does a good impression of that massive polysynth sound. You can also access another Polysix party trick in the Key Assign Mode section: tap the Hold button in Poly mode to stack up to six different notes, then tap Chord to assign your choices to the chord memory. You can then play back the memorised chord by triggering it at any pitch.

The interface, as in the original, offers control over VCO, VCF, modulation generator, envelope generator, arpeggiator and effects, and usefully offers 50 presets as well as a handy 'Init Patch' preset so you can program from scratch.

iPolysix's default keyboard has 37 notes, which of course have very narrow keys to fit them onto the iPad screen! Tap the button at the bottom left of the keyboard to reveal the optional keyboards of varying width, and the small switch labelled 'Kaoss Pad'. Two pads are available: the left-hand one can be assigned to any two parameters on the synthesizer, and the right-hand one is an alternative note input device, from which a range of preset scales and keys can also be chosen.

So far, so good: it's like a Polysix with some modern additions — but I should voice a complaint at this point. Recreating the look of the classic analogue synthesizer doesn't always recreate the feel, and those rotary controls are particularly fiddly. I discovered that micro-changes could be made by flicking up and down (and left and right for even finer adjustment), but I would struggle to make any timbral edits in a live situation without a magnifying glass! And why are the Kaoss pads so small? Surely it would be easy enough to add a full-screen option?

iPolysix also incorporates a step sequencer with which you can program up to 32 discrete patterns, each with between one and 64 steps. A song can contain up to 100 of these patterns in any order. Additionally, each pattern can include two sequences (which have to be of the same length, of course) played by independent synthesizer patches, and one drum sequence, greatly increasing your creative options. The drum sequence can contain up to six independent drum parts, the patches for which carry through the whole song, but do include the option to use a small range of pitched basses. Synthesizer patches are assigned per pattern, however, so it is possible to create complex-sounding music with up to three pitched parts and drums playing simultaneously. 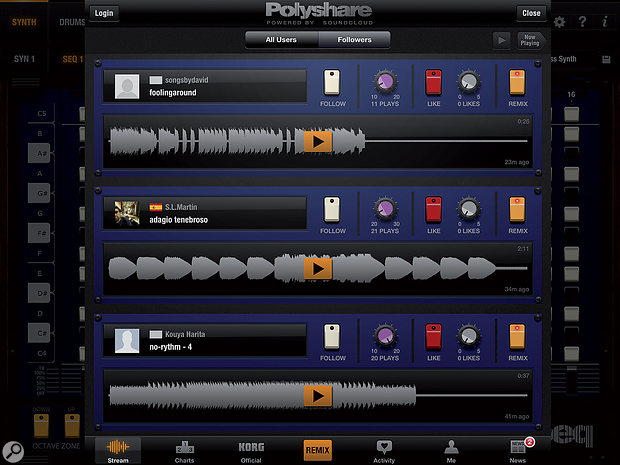 When you've finished programming, iPolysix offers a range of sharing options. You can upload to your own SoundCloud or 'Polyshare', which is a SoundCloud space specifically for iPolysix users to share and comment on each others creations. You can render to .WAV file, which is then accessed via iTunes file sharing on your Mac, or use AudioCopy, which places your mix on the clipboard, making it accessible to other apps that support the audio-paste half of this protocol, such as GarageBand. iPolysix also supports WIST, Korg's own inter-app performance and sync protocol. I was, however, slightly disappointed not to see a virtual rendition of the original Polysix's cassette-tape dump facility!

The iPolysix faithfully brings the original Polysix sound back to life. If it was just a synthesizer, the controls and keyboard wouldn't gain top marks for usability, but the step/pattern sequencer is sufficiently flexible to make up for that. I recommend that fans of the kind of sounds that made the Polysix famous take a closer look at the creative options on offer here.