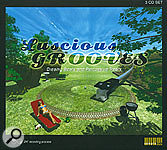 Behind the dodgy artwork of this new release from Sample Lab lurk almost 300 24-bit drum and percussion breaks. These are organised into 13 tempo groups covering 80-135bpm, and the booklet claims that all the loops are sample accurate, allowing you to layer any in the same tempo group without further processing. Ever the sceptic, I gave this claim the once over in my sequencer, but there was no knocking it. That said, the loops do swing differently, so layering isn't entirely a no-brainer.

Sonically, there's a lot of variety here. Some loops are obviously electronic, others are straight drum kits, others are built from ethnic percussion; the sound quality is by turns big and hi-fi, small and crispy, warm and retro; and the processing has its share of subtle vintage flavours and real room/plate treatments, but also periodically goes to town with extreme dynamics, distortion, and filtering. What is clear is that care and attention have been lavished on these loops, which is a breath of fresh air when many 'yet another bunch of loops' libraries seem satisfied just to run boring samples through the odd distortion plug-in.

This library doesn't really fit very well within any specific style, so hip hop producers are as likely to benefit from this library as house 'choon'-smiths or the more technological emo rockers. The strength of this approach is that almost anyone is likely to get something from Luscious Grooves, so I'd suggest that it would make an excellent starter pack for the beginner, as well as being a solid workhorse for the jobbing producer. Of course, the ability to layer samples so easily also means that you can get a lot more mileage from this collection than you might think at first — there are as many different shades of any given loop as there are other loops to mix in with it.

One thing which will endear this release to professional producers is that the documentation not only includes the audio CD track number, WAV file name, and tempo indication, but also adds a few well-chosen words of description. Why can't every manufacturer of sampled loops do this? First of all, you get some idea of which files are most likely to contain the kind of sound you're after. Plus, if you come across a loop you like but don't want to use straight away, it's a lot easier to remember which one it was at a later date. If you have even a few different loop libraries then this kind of information is invaluable, because it lets you spend more time making music and less trawling through sample CDs.

It's been tough deciding on the star rating here, because, thoroughly solid and professional though Luscious Grooves is, it somehow left me more impressed than inspired. This is probably because it covers such a wide stylistic range — no matter who you are, only some of the material is going to press your particular buttons. However, I reckon I could rely on finding a slick, useable break for just about anything I was working on, and this shouldn't be undervalued, especially in a professional environment where time is limited; so five stars it is! Mike Senior

Created by Perry Geyer of Cybersound, Electro Magnetic Pulse has a title which could place it in a number of musical styles. However, the emphasis here is on breakbeats with attitude, aimed at styles such as Electro, Big Beat, and the more experimental end of House. In testing, I auditioned the WAV files using Acid Pro v4 and the set contains over 400 individual loops (approximately 270MB in total) spread across nearly 100 construction kits. In the main, each kit consists of between two and seven loops — although a few contain more — and a demo WAV is included with each kit showing one way the loops can be put together. 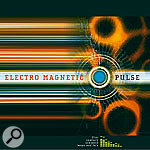 The construction kit titles suggest that they are aimed at those with a more experimental side to their musical production; Insectoid, Atomize, Dr Demento, Mind Sweep and Offworld are typical examples — this is more Bill Laswell territory and not for those looking to complement their chart-orientated R&B or pop loop collections! These loops would suit a club/dance setting and, given the hard-edged, high-technology tone, they would also work well within a film or advertising context featuring urban, industrial, or futuristic images.

While there are exceptions, the vast majority of the loops are dance-orientated drum loops, originally recorded within the 110-140bpm range. However, this is far from being just another straight drum-loop collection. As well as a solid kick/snare-driven beat, the bulk of the loops contain other percussive elements and many feature some filtering or other processing. From synthy bleeps, vinyl scratches, over-the-top snare reverb, big booming kicks, or beat-synchronised filters, these loops generally feel quite busy, especially when used at high tempos. Indeed, in some contexts many of them would work as a musical bed with only a modest amount of anything layered over them — just enough not to worry about the terms of the licence!

Within each construction kit, many of the loops provide variations around a consistent style of rhythm and, given how full-sounding many of the loops are, it is actually easier to sequence them rather than layer them. However, if you do want to layer some material over these beds, there is little in the way of strong melody or chord sequences within the collection — some mixing and matching from other libraries or live playing would be required to add these elements.

While I'm all for the multiple formats that many modern sample sets seem to be supplied in, I'd hesitate to say that the quantity of material supplied in Electro Magnetic Pulse represented a bargain in the current market. However, the quality of what is here is really high and, having experimented with the loops for the purpose of this review, their creative potential is obvious — good stuff! John Walden 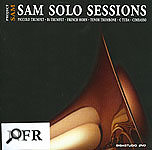 With its Giga edition weighing in at 9.68GB, this is Project SAM's biggest library yet. An intensively sampled 'B'-flat solo trumpet sets the pace, working through a list of deliveries which includes non-vibrato long notes with a subtle volume swell, soft vibrato sustains, crescendos, and diminuendos. The player also performs a selection of Project SAM's trademark 'intervals' (slowish, upward legato movements), short, fanfare-like phrases, machine-gun-like 16th notes, and upward octave runs. Some of these samples are duplicated in SAM Trumpets; all are strong, controlled, and confident sounding.

Sounding pure, bright and clean in the big hall, the well-played piccolo trumpet's staccatissimos steal the show — these lively articulations are a joy to play, and work very well in rhythmic passages. The solo trombone's four-dynamic long notes and staccatos sound rich and punchy when layered together in the 'hard sustain' program. SAM Horns ' four-horn ensemble is impressive, but this library's solo horn is more precise and focused — its steady, polished delivery is ideal for melodies and chords, and its marcatos make a big, commanding concert-hall noise.

The cimbasso, a rare, mad-looking contraption, turns in some insanely low, ferociously powerful bass notes, as well as more subtle and mellow horn-like sonorities. Last up is the tuba, and this one's a great all-rounder. For some reason its 'Klezmer staccatos' reminded me of Vivian Stanshall's masterpiece 'Do The Strain', but on a less scatological note its four-dynamic sustains can deliver both expressive, mournful melodies and apocalyptic bass trumps. The tuba's top notes suffer from some coarse tuning errors, which I imagine Project SAM will fix in a web update.

As in SAM Trumpets, the samples are presented in a choice of three listening perspectives. The Utrecht concert hall sounds great, adding a delectable, floaty reverb throughout. However, there's a potential problem using sustains (none of which are looped) with release triggers — if notes are held too long, the samples will expire, creating an embarrassing gap between notes and their reverb! There are no trills or glissandi, but there are six useful programmed ensembles, plus some effects: not the unhinged sonic treatments found in SAM Trombones and SAM Trumpets, but low-key, low-pitched instrumental noises.

Composers can keep on smiling — this is a worthy companion to Project SAM's brass ensembles. Dave Stewart

The sax is a notoriously difficult item to sample — its sound is fluid, mobile, and dynamic, its timbre and repertoire unpredictable and dramatically varied. Worse still, the instrument's traditional exposed solo role renders any shortcomings horribly obvious. All this makes the saxophone a very difficult moving target for samplists; several sound companies have taken aim in the past, but most have missed by some distance. 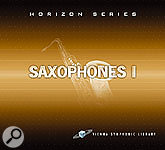 VSL's Saxophones 1 (6.1GB) trains its sights on the soprano and tenor saxes. Played by Robert Bernhard, the multisamples were pristinely recorded in the company's Silent Stage, and duplicate the elaborate performance variations of VSL's orchestral solo winds. (For details, see the review of VSL Pro Edition in SOS March 2004.)

The soprano's long notes are beautifully played, with a gorgeous warm tone and lyrical vibrato infusing the samples with real feeling. You'll want to improvise for hours with these beautifully in-tune legato notes, which sound equally poignant delivering melody lines or quiet chords. My only criticism is that, while the instrument's soft-sounding, lower three dynamic layers are tonally homogeneous, it's quite a shock when the fourth layer of bright, piercing loud samples leaps in. Bridging this timbral gap would require the insertion of another couple of dynamic layers.

Mr Bernhard plays his tenor sax just as nicely as the soprano — the tenor's bigger sound offers more opportunity for fruity staccato honks and free-booting blasts, but the quiet notes remain sensitively played, warm, and inviting to the listener. Overall, the delivery is quite controlled; there are no screaming 'Roadrunner'-style outbursts, licks, or phrases, but one cute programming touch adds long or short 'falls' to the end of the saxes' long notes in the form of release triggers — very effective for jazzy brass stabs.

Making VSL's brilliant Performance Tool work in conjunction with their Horizon titles requires some tedious fiddling about with 'on-line activation wizards', but it's worth the effort. Hearing the two saxes liquidly moving from note to note with realistic slurs and slides is very gratifying — thanks to the Tool, this is the first time a sampled sax has been able to satisfactorily 'join up' legato notes. The huge selection of note repetitions, also managed by the Tool, is another bonus. Only one downside: inexplicably, the soprano's loud performance legatos were delivered with built-in portamento slides, whereas the quiet versions were played straight. A rare mistake.

While one could quibble at a couple of other stylistic decisions (conventional trills are omitted in favour of accelerating ones; fast octave runs use chromatic and whole-tone scales rather than major and minor), the inescapable conclusion is that this is a laudable, great-sounding piece of work of enormous musical depth. Dave Stewart