Want a forward-sounding mic, something with a vintage character, or a more neutral tonality? With the Atlantis, you can have all three... 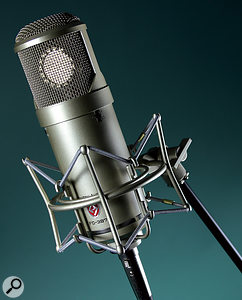 Lauten Audio are best described as American 'boutique' manufacturers of interesting and high-quality microphones, their aim being to produce microphones of character and distinction. I reviewed the LT321 Horizon model in the September 2009 issue of SOS (/sos/sep09/articles/lautenhorizon.htm), and Lauten's newest model is the FC387 Atlantis model.

This is a very large, solid-state (FET), multi-pattern studio microphone that builds upon several technical features and sonic characters already developed in some of Lauten's other mics. The Atlantis is a bit of a beast, measuring 140mm in length, about 65mm in girth, and weighing in at a chunky 1.06kg. A sturdy mic stand with a decent counterweight is definitely required here! The mic ships in a very elegant wooden box with a felt-lined interior that also houses a cat's-cradle-style elastic shockmount (complete with 3/8-inch adaptor), and a felt bag to protect the mic when not in use. Everything about the mic and its packaging says high quality and attention to detail.

The Atlantis' body has a shiny, lacquered, polished-metal finish, with a substantial, multi-layer, wire-mesh grille around and above the oversized capsule. Interestingly, the bespoke US-made capsule is a little larger than usual, too, employing 31.25mm-diameter, edge-terminated diaphragms. This individually hand-tuned capsule has been borrowed from Lauten's LT381 Oceanus valve mic, and is apparently amongst the largest capsules in the world!

Something else borrowed from a sibling mic is a unique pad/gain switch, which not only provides the familiar 10dB of pre-attenuation, but also a 10dB gain boost, and is controlled from a recessed, three-way slide switch just below the grille of the mic on the left-hand side. This feature first appeared in Lauten's FC357 Clarion model, and is intended to assist budget mic preamps by providing a stronger output, thus requiring less preamp gain and hopefully resulting in less preamp distortion, lower noise and a wider bandwidth (the bandwidth of some budget preamps reduces as the gain is increased). Alternatively, the +10dB gain position could be helpful when it is desirable to overdrive a valve preamp, say, to achieve an interesting sonic character.

A second slide-switch on the right-hand side of the body switches between the three standard polar patterns (omnidirectional, cardioid and figure-of-eight), but the really interesting facility is a third three-way switch on the back of the mic. This is marked, rather intriguingly with the letters F, N and G, which stand for Forward, Neutral and Gentle. The idea is to offer three radically different mic voicings at the flick of a switch, and it is a very neat idea that increases the versatility of this mic considerably.

The Forward position is intended to provide a very modern, detailed, revealing kind of sound character, lifting the high-end response above about 3kHz by a couple of decibels. The Neutral mode, as you might expect, provides a much more even response, for a more 'classic' sound. Finally, the Gentle mode is the complement of the Forward option, attenuating the response above about 3kHz by a few dB, the intention being to help tame harsh or bright sources, and to offer a more vintage kind of sound.

From this description, you might get the impression that the switch is a simple EQ stage, but it's not! It is rather more complex than that, affecting the loading of the capsule and the way the impedance converter stage works as a whole. The effect of the switch is different for each selected polar pattern, too, with the greatest effect, by far, on the figure-of-eight response, where the Forward lift starts from as low as 200Hz. So rather than simply equalising the same mic in three different ways, this really is more like having three slightly different microphones all in one, with three distinct tonal personalities or timbres on offer. In vocal applications, this facility offers some easy-to-try variations that could prove popular with a variety of vocalists.

Some creative input on the design and fine-tuning of this multi-voicing feature came from Fab Dupont, aka Fabulous Fab: a well-known writer, producer and mix engineer with his own Flux Studios in New York. Dupont has worked with the likes of Jennifer Lopez, Shakira, Queen Latifa, Isaac Hayes and Marc Anthony, among many others, and is often found in the feature pages of music and recording magazines. His view of the Atlantis is that it is "the most versatile mic in [his] arsenal. It will work for every single vocal application you can think of, and more.” High praise indeed!

Turning to the technical specifications, the Atlantis' frequency response is given as the anodyne standard 20Hz-20kHz, but without limits. Looking at the supplied plots of the cardioid and figure-of-eight modes, the response just about lies within a ±4dB range (relative to 1kHz) between 40Hz and 15kHz. In omni mode, that range requires a ±5dB window. The reason is simply that this mic is quite coloured, albeit in a musically useful way, and the response is quite mountainous. In particular, there is a significant bass peak centred at about 75Hz (50Hz in figure-of-eight mode), which is around 4 or 5 dB higher than the sensitivity at 1kHz. Proximity effect obviously adds to this if the mic is used close to the source with one of the directional patterns. There is also a prominent response dip between about 100Hz and 1.5kHz. All in all, then, there is quite a lot of 'spectral sculpting' going on — but it's the same kind of sculpting that one might do with EQ to add body, reduce mud, and provide clarity. Here, the mic does much of that for you!

Sensitivity of the Atlantis is given as 16mV/Pa, presumably rising to 50mV/Pa with the +10dB gain switched in. The standard sensitivity is fairly normal for a model of this kind, while the additional gain mode makes it a pretty hot mic, joining the most sensitive two percent of all capacitor mics listed on www.microphone-data.com.

The maximum SPL is quoted as 130dB for 0.5 percent THD at 1kHz, and again I presume that figure rises to 140dB SPL with the 10dB pad engaged. Self-noise is higher than I was expecting given such a large diaphragm, the figure being 12dB(A), but it is still quieter than many mics and won't be a problem in its intended applications. The mic requires standard 48V phantom power, but no current requirement is given.

Placing a mic this large and traditionally styled (which combines to imply expensive!) in front of any vocalist automatically encourages a great performance — which is half the battle. But on first hearing the Atlantis it is evident that this is a very interesting mic. It's clearly not going to win any awards for tonal neutrality, but that's not what the Atlantis is about. It is very much designed to provide a musically beneficial character, helping the desirable qualities of the source to shine through in a larger-than-life way.

With the mic in cardioid mode, I noticed a substantial rear tail at low-mid and low frequencies, with the 'deadest' angle being around 135 degrees from the frontal axis — so it's leaning more towards hypercardioid than cardioid. It also bangs and pops a fair bit when you change any of the switch positions, so it would be wise to fade the mic down before fiddling. There is a fairly strong proximity effect, but it is predictable and only becomes an issue if the vocalist is right on top of the mic. Plosive popping seems reasonably well controlled and, when the mic is mounted in the supplied shockmount (which is attached via the screw thread around the XLR stalk at the base of the mic), it is relatively immune to mechanical vibrations.

The unique selling point of the Atlantis, though, is its variable voicing. The Neutral position provides a distinctly warm, larger-than-life sound character which is clear and reasonably benign with most vocalists' voices. The Forward position introduces a very obvious upper-mid and HF lift that adds sparkle and focus to the source, emphasising detail and clarity and really helping the voice to cut through a busy mix. Surprisingly, the Forward mode doesn't seem to stress sibilance too much, either, which is a bonus. By contrast, the Gentle position sounds distinctly vintage and almost tube-mic-like in nature, with a very smooth, creamy quality, but it still manages to retain enough detail and clarity to avoid becoming muddy or sounding excessively dull.

Lauten recommend the Atlantis for just about everything: vocals, piano, kick and snare, acoustic and electric guitars, bass, organ, strings, brass — uncle Tom Cobbley and all, as we say in Devon! It seems to me that vocals are its main strength, but I achieved some very nice results with it switched to the Gentle mode in front of an electric guitar cabinet. With the pad switched in and Forward mode selected, placed about eight inches from the instrument and angled slightly to one side, the mic also gave a very crisp rendition of a trumpet solo, which soared through the mix very impressively.

The Atlantis is as imposing aurally as it is visually, while the ability to boost the output, and to switch between three distinct timbres, makes this a truly versatile mic, which helps to make the price seem very reasonable. The mic is well equipped and nicely presented, too. Just make sure your stand is in good condition and well balanced before letting go of the mic!

I don't know of any other FET multi-pattern microphones with switchable timbres, but at a broadly similar price, other respectable vocal-mic options include the Peluso's P12, 2247 and 251 models.

An imposing mic with vintage styling, the Atlantis has a full-bodied sound but without any muddy quality. Its three-way voicing switch makes it a versatile choice, capable of sounding either neutral, ultra-smooth or crisp and bright.