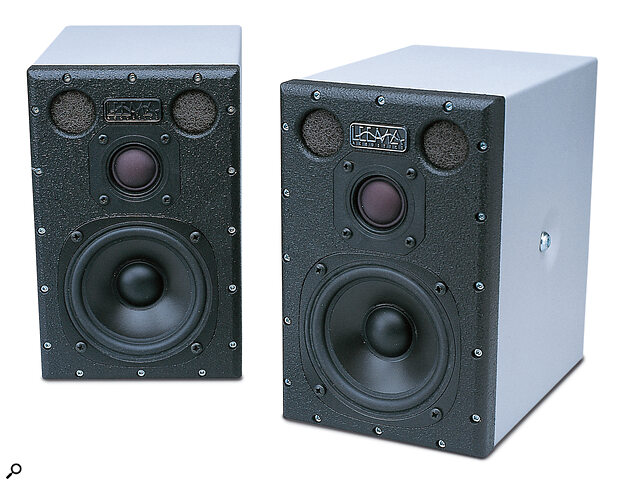 It is a good general rule that miniature monitors are rarely of reference quality, but Leema Acoustics claim to have created an exception.

The Leema Acoustics Xen monitor is seriously small. The front panel is only fractionally larger than an A5 sheet of paper, measuring 140mm wide by 220mm high. The cabinet is 205mm deep and only encloses a total volume of around five litres. Yet this speaker has been cleverly designed to deliver the sort of SPL, power handling and frequency response associated with a monitor twice its size.

The Xen uses a two‑way passive design, with both drivers being Seas devices: a 100mm bass unit and a 27mm soft‑dome tweeter. The latter is ferrofluid‑cooled and has been modified according to Leema's specifications in order to alter its resonance characteristics. Also the standard grille for that model of tweeter has been removed to improve stereo imaging. The tweeter is capable of an impressive 1.5mm throw — huge in comparison with most designs — bestowing it with power handling of over 70W RMS and phenomenal headroom. In fact, both drivers are capable of astonishingly high SPLs for speakers this small, but they betray no hint of stress or strain at high levels, or even power compression.

To achieve such high SPL, the speaker has to be able to 'breathe' well — in other words, it has to be able to move large quantities of air in and out of the box very quickly. Consequently, the Xen employs a pair of 30mm ports which exit at the top of the front baffle above the centrally placed tweeter. For a small cabinet these represent a relatively large vent area, and the ports are much longer than normal, with an elbow joint three‑quarters of the way back into the cabinet. Conventional cellular foam is used to damp the port exits.

Apparently, during the early design stages, Leema discovered that the industry‑standard computer programs used to calculate port area, length, loading and air‑speed — the critical parameters for achieving an accurate low‑frequency performance in reflex loudspeakers — became significantly inaccurate when calculating the parameters for small cabinets, largely because of mathematical rounding errors. So Leema designed their own high‑precision computer program to derive the parameters for the Xen.

The front baffle is 24mm MDF, but only about three‑quarters of that is visible, as there is an internal slot which supports the cabinet's sheet‑steel sides. The early prototypes were constructed entirely of MDF but this presented two problems. Firstly, for a small external cabinet size the thickness of MDF reduced the internal volume; and, secondly, the MDF had a recognisable 'box sound' which Leema wanted to avoid. In contrast, the damped steel case impacts negligibly on the internal volume and, surprisingly, has no distinct sound of its own at all.

A steel bracing bar runs across the centre of the cabinet and its external ends act as mounting points for either a hanging suspension or Leema's own unusual Xenith cantilevered studio stands. The internal surfaces of the metal cabinet are damped using a double layer of a bitumastic material, and the remaining volume is packed with a long‑fibre natural lambs wool, which is apparently audibly superior to man‑made fibres. Polyurethane foam fixed to the inner side of the crossover helps to prevent acoustic reflections within the cabinet.

Connections are via two pairs of 4mm binding posts on the rear panel, allowing bi‑wiring or bi‑amping. However, removable links are fitted between the woofer and tweeter binding posts to facilitate conventional single cabling. Unusually, these are strips of normal fibreglass PCB, gold‑plated and clamped under the screw terminals.

The crossover components are mounted on the rear panel, using air‑cored coils, audiophile capacitors and high‑power resistors, separating the frequency ranges of the two drive units at 3.8kHz. The crossover is capable of handling very high power (over 600W), which is another important factor in the design's total lack of power compression. It also presents a very uniform impedance of 6Ω and has been designed to minimise group delay, which Leema claim to be around half that of comparable speakers at low frequencies. Accurate timing means good transient response, and precise, stable imaging — both of which are obvious strengths of the Xen.

The on‑axis frequency response of the Xen is printed on the rear panel, but is no manufacturer's propaganda! The plot was obtained by independent measurement and shows a well‑defined low‑frequency corner of 57Hz (at ‑3dB and measured in half space), with a trace which lies within 2.5dB all the way up to 20kHz. There is a very mild suck‑out at around 1kHz and a smaller peak at around 15kHz — both the result of inherent drive‑unit characteristics — but their amplitudes are so small as to be all but irrelevant.

Used in a free‑standing position, well away from walls, the Xen comes across as a very slightly bass light. However, it is phenomenally clean, clear and detailed, with wonderfully natural dynamics and realistic volumes. It also displays razor‑sharp, three‑dimensional imaging — one of the undeniable benefits of small enclosures — when driven by a competent and powerful amplifier. The lower mid‑range and upper bass are fast, detailed, tuneful and accurate, though without the weight necessary in a true reference monitor.

However, move the Xen closer to rear or side walls and the bass really begins to fill out, providing an overall performance which is simply stunning for a box of this size. The first time I heard the speaker, at the AES convention in Amsterdam earlier this year, I simply could not believe what I was hearing — I even started looking around the stand for cunningly concealed extra speakers! Even so, I suspect that users wanting a full‑range system will require one of the Leema subwoofers, designed to complement the Xen. Both designs feature 7.1 bass‑management facilities. The smaller unit, the Xenon Lite, employs a 120W amplifier and is claimed to produce a usable low‑frequency output at 30Hz. The larger 240W Xenon Heavy apparently reaches 18Hz.

The Xen is the most impressive miniature monitor I have ever heard. To call it a nearfield is to do it an injustice, as it is perfectly capable of working as a true reference‑quality midfield unit with one of the matching subwoofers. For surround‑sound systems, the Xen would also make a very elegant choice. This monitor is definitely worth an audition if your budget can stand the UK price — just make sure that you can also afford an amplifier good enough to live up to the Xen's capabilities.

An ultra‑compact nearfield speaker that thinks it is a conventional midfield. Stunning performance with true monitor accuracy and dynamic resolution.