If you like weird and wonderful effects, you need to enter the spectral domain — and SpectrumWorx 2 will take you there in some style.

I've always enjoyed plug‑ins that operate in the spectral domain, and my all‑time favourite was DelayDots' SpectrumWorx, which I reviewed back in SOS August 2004 (/sos/aug04/articles/delaydotsspectworx.htm). This modular VST effect plug‑in could modify the sounds of VST Instruments, recorded audio, or even a live audio input, in astonishing ways, via a string of different spectral effect treatments inserted into 'slots' in a virtual rack interface.

Sadly, as good as his original idea was, developer Alexey Menshikov never found enough time to continue development, so I was very pleased to hear in 2009 that DSP specialists Little Endian had acquired the DelayDots product range and intended to develop its ideas further. They have spent the last year rewriting SpectrumWorx from the ground up and incorporating numerous enhancements. The result is SpectrumWorx 2. 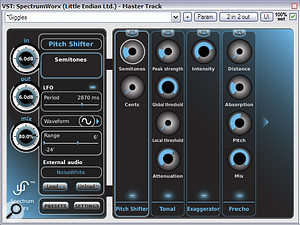 SpectrumWorx 2 sports a new, clearer main window, with global controls on the left‑hand side, and the five‑slot modular 'rack' area on the right. Each module now has up to four rotary controls, each of which can be controlled by its own unique LFO.

The SpectrumWorx modular interface offers huge flexibility, since each of its various slots can have any of the available treatment modules dropped into them. It's rather like using a string of guitar stomp boxes, but operating in the spectral domain, without any dangling cables, and offering drag‑and‑drop reordering.

Version 1 offered 45 different modules and a chain of up to 16 slots, but in practice almost none of the factory presets utilised more than five slots, so the 55 modules and five slots of the redesigned v2 interface actually provide far more flexibility, while taking up less room on screen. If you want to go really potty with modules, you can always chain several instances of the plug‑in.

The version 2 graphic design is much clearer than that of its predecessor. A left‑hand main window contains global controls, with the five‑slot modular 'rack' area on the right; both now have larger controls that also now offer a readout of parameter values in dB and Hz rather than arbitrary numbers, making the design process somewhat easier and the audio outcome at least slightly more predictable.

The interface also features two additional windows for preset management and various engine settings, which pop up alongside the main one when the appropriate buttons are pressed, thus keeping screen clutter to a minimum. These additional windows also offer handy variable opacity so you can still see what's happening in your sequencer 'underneath' them — only the smaller main window obscures your view.

A few long‑time users may miss the artistic choices of the old Skin options, but personally I found the new blue and grey interface displayed far more static and dynamic information in a much clearer way, and was very happy with the new 'look'.

Some of the most dramatic effects in the first version of SpectrumWorx were obtained by moving one or more controls in real time, but to do this you needed to manually assign them to a MIDI controller number and automate them externally. Now you can do this automatically from within SpectrumWorx, and simultaneously in different ways for every parameter.

With seven LFO waveforms and an on/off switch, plus speed and minimum/maximum range controls, this offers a veritable feast of new possibilities. However, five LFO controls for up to four parameters in each of the five slots could rapidly make the interface unwieldy, so Little Endian wisely only display the controls of a single LFO for the currently selected parameter. You can still see exactly what's happening to everything in real time, though, as the current value of each parameter is displayed dynamically as an opening 'iris' while the various LFOs modulate them.

A serious limitation is the lack of sync options to lock the LFO cycles to the tempo of your song when running SpectrumWorx inside a suitable VST host application, but apparently this feature is at the top of the LittleEndian 'to‑do list', and may even be available by the time you read this. I sincerely hope so, as it would open up the musical options considerably. Envelope‑modulated LFOs are also promised in due course, which would extend the possibilities when you can't tempo-sync.

The remaining controls remain largely as before, with global In, Out and Mix controls to set direct and effect levels, and various spectral engine tweaks available from the pop‑up settings window that enable you to adjust the compromise between audio quality and CPU overhead. Various higher quality options are now available to reflect today's significantly greater processing power, and this time around, all settings are saved on a preset‑by‑preset basis, so you can more easily employ lower quality settings for special effects. 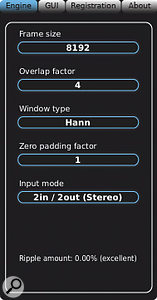 If you click the Settings button in the main window, this window pops up alongside it, keeping screen clutter to a minimum. Here you can change the operating mode and various GUI options, as well as tweak various engine parameters for smoother results or special effects.

SpectrumWorx offers a stereo in/out mode by default for general‑purpose audio treatments, as well as a mono in/out option. However, quite a few of the modules can also use external audio files to achieve a huge range of vocoder‑like manipulations, where the characteristics of one sound are imposed on another.

External audio is normally loaded into RAM using the Load/Unload buttons in the global area of the interface, and if a preset uses external audio, that file gets loaded automatically each time you select it, so that the treatment sounds identical. However, there's a useful new global option to 'Ignore external audio', which bypasses the loading of samples already associated with existing presets, so you can quickly try out a selection of presets with your own choice of sample substituted.

These external audio files are automatically looped so they can provide continuous treatments, and being loaded into RAM, their maximum size is limited by available memory. However, you can bypass these limitations (as well as sync'ing the transforming audio to the signal audio) if you switch SpectrumWorx to its side‑chain modes, so you can use one streaming audio track to transform another. To do this, you'll need a sequencer host with flexible enough routing to support four‑in/two‑out (stereo with side‑chain) and two‑in/mono‑out (mono with side‑chain) mode options; although the details will differ from host to host, you can certainly use side‑chaining in Reaper, Ableton Live, in Cubase using Group Channels, and no doubt loads of others. 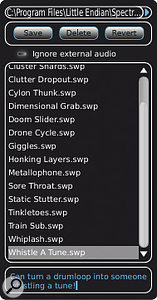 The pop‑up Presets window offers a helpful description box at the bottom where you can add hints and tips on how to use your creations.

Apparently, a top priority in SpectrumWorx version 2 was improving audio quality, and it didn't take me long to spot the difference. Running both versions side by side with a single Pitch Shifter module inserted proved that v2 offered much greater clarity and precision, as well as operating in true stereo (version 1 mixed external stereo audio down to mono or let you choose the left or right channels).

Clicking on the Presets button opens a separate pop‑up window alongside, where you can load existing creations and save your own. Given the sometimes unexpected transformations available with some presets, usability is enhanced by the inclusion of a handy description field where you can read and write notes on what to expect from a particular preset, or what knobs are best to twiddle. I found this a great help when documenting my own creations, both as an aide memoire and to help anyone else who ends up using them.

Although SpectrumWorx 1 could occasionally prove a little temperamental, version 2 proved to be remarkably stable. The only untoward issue I experienced throughout the entire review period was a crash after I'd first installed it, and this turned out to be an incompatibility with my virus checker. Temporarily disabling the latter for the few seconds of the installation resolved things.

SpectrumWorx 2 is quick and easy to use, and with its greater stability, significantly improved audio quality, true stereo treatments, plenty of new module options and the added flexibility of parameter modulation, it's also a huge advance over its predecessor. It should be snapped up by existing users and explored by new users alike. Little Endian also seem extraordinarily responsive to user suggestions: a Mac version with AU support is already at the beta‑testing stage and could well be out before you read this, while an update for both Mac and PC with additions such as tempo sync, convolution, octaving and infinite time‑freeze is also expected within a month or two. Native 64‑bit and RTAS support, plus envelope followers, should appear early in 2011.

Billed as "the ultimate sound mangler”, SpectrumWorx 2 is in fact capable of delivering subtle and ethereal transformations as much as more extreme sonic manipulations. The results can still be somewhat unpredictable at times, but if you're searching for new and unique sounds, it doesn't come much better than this!

There are plenty of vocoder‑based spectral manipulation plug‑ins and instruments available, but there's not a lot of competition for the significantly more versatile SpectrumWorx, especially now that NI's Spektral Delay is sadly discontinued. Closest is Izotope's cross‑platform Spectron (www.izotope.com), which is rather less flexible but consequently somewhat easier to use.

There are numerous simpler products such as Soundhack's Spectral Shaper suite (www.soundhack.com), and even some freeware plug‑ins (I explored quite a few of the PC ones in SOS April 2007). However, SpectrumWorx remains unique in offering a totally open‑ended modular approach to multi‑band spectral manipulation.

Like the best card tricks, multi‑band spectral plug‑ins can produce results akin to magic, by first chopping the incoming audio signal into short chunks, each one of which is then analysed and split into a host of individual frequency and phase components (SpectrumWorx employs Short Time Fourier Transforms, but you really don't need to know that to enjoy it).

These components can then be treated in a variety of ways while still in the spectral domain, by (for example) sorting them into different orders to turn high‑frequency content into low or vice versa, inverting them to swap loud and quiet components, shuffling them into a totally different order, or subjecting them to a host of other mathematical processes, before finally recombining the frequency components at the far end of the chain and dealing them out as a stream of new audio chunks, often resulting in totally unexpected new sounds. 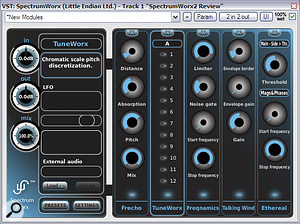 Here are some of the most photogenic new modules on offer. You can also see the animated 'opening iris' controls that can be automated by LFOs.

In version 2 of SpectrumWorks, the modules are now sensibly sorted into folders that give you an idea of their capabilities, but there are also lots of new ones in each category as well. There simply isn't enough space in this review to provide details of all the new modules, but here are some of my highlights:

The results may not always be predictable, but SpectrumWorx 2 is a superbly versatile plug‑in that repays those who spend time exploring the possibilities with plenty of unique new sounds. Highly recommended!